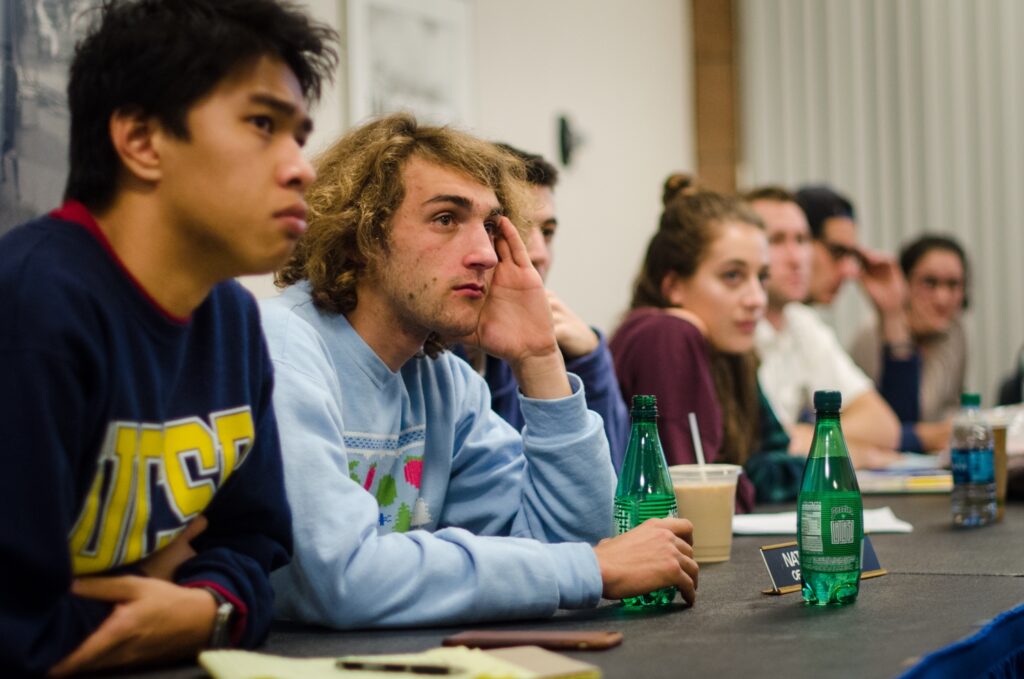 The Associated Students (A.S.) Senate met Wednesday in the Flying A room of the UCen to discuss Senator Dustin Larrazolo’s possible resignation, funding for the Anscombe Society’s debate on marriage and recent protests against the California Border Patrol’s (CBP) Career Fair presence.

Larrazolo, a CCS Collegiate Senator and third-year CCS chemistry and biochemistry major, gave a speech in public forum citing reasons for his possible resignation at the end of the Winter 2016 Quarter.

According to Larrazolo, he began to consider resignation after fellow senate members allegedly met with Hispanic and queer communities with which he was working, without Larrazolo’s knowledge, to work against his plan to host a public open caucus. The caucus, which Larrazolo planned to host at his house, would have been an opportunity for students to discuss concerns and ideas going into the upcoming spring elections and the potential founding of a new political party.

“Tonight I am pouring out my heart because I ran for office with promise that I would have voices be heard or I’d die trying,” Larrazolo said. “Seeing those whom I’ve trusted in this process meet in secret to end open caucus spaces that I was going to host at my own home has pushed me to the brink.”

Larrazolo said he was hospitalized for mental health reasons after becoming excluded from the Hispanic and queer communities with which he identified.

“I’ve been going through a lot lately,” Larrazolo said. “To lose the safe spaces I have built here on campus, that’s all I had left.”

Larrazolo said many senators do not follow the values of the identities of which they claim to have.

“It is disgraceful that some of you label yourselves as allies and progressives. OPP [Open People’s Party] is not the only problem, so stop using it to protect your work as well,” Larrazolo said. “I only wanted to represent queers, Latinos and CCS students.”

Larrazolo said A.S. political parties create the illusion of unity under shared values, which according to Larrazolo is not an accurate representation of OPP.

“I was put into some kind of battle that I thought I had to fight and I want to apologize to those of you who have been afflicted by this whole predicament of political parties,” Larrazolo said. “We have aligned ourselves with things that do not exist. I am sorry to all of you, and with this I am announcing possibly my intent of resignation.”

Senate also discussed the Anscombe Society’s plan to host a debate between scholars for and against “nontraditional marriage,” and its role, or lack thereof, in funding the event. The Anscombe Society, which advocates for traditional marriage as the only valid definition of marriage, requested funding from A.S. Finance and Business Committee (A.S. F&B), an A.S. Senate entity, for a debate between Dr. Ryan T. Anderson and UCSB philosophy professor Dr. Quentin Gee.

A.S. F&B originally chose not to fund the event, and the Anscombe Society spoke to Senate to challenge the decision.

Carlos Flores, Anscombe Society president and fourth-year philosophy major, said the A.S. F&B rational to not fund the debates based on the capabilities of the participants was not justified.

“Whether you think that Dr. Gee is a capable opponent or whether this event is balanced should be irrelevant in your decision on whether to provided funding,” Flores said. “If balance were a criteria for providing funds, no leftist speaker would be funded on this campus.”

Flores said the event is an academic event that promotes political and philosophical discussion.

“It contributes to the mission of this institution as an institution of learning,” Flores said. “It is also balanced to the extent that this is a debate and Dr. Gee, I assure you, is a good debate opponent.”

Flores said funding from A.S. is “crucial” if the event is to occur.

“As it stands, we do not have sufficient funds for Anderson’s honorarium expenses and room rental costs and CSO’s, etc.,” Flores said.

Senate voted to review A.S. F&B minutes and fully funded the event in a 20-0-1 vote.

Senate also discussed the protests that broke out against CBP at the recent Career Fair, which some students found upsetting.

Michael Torbati, off-campus senator and third-year economics and accounting major, said the protest was not what he expected it to be and that peers have told him they believe it negatively impacted the school.

Jeffrey Fung, off-campus senator and third-year economics and accounting major, said the protest made students nervous to talk to the employers, which he feels defeats the purpose of a career fair.

“That wasn’t fair to the students. I’m not saying anything against the protest itself, but the way it was carried out,” Fung said. “I felt embarrassed when I was walking around the area saying ‘I stood behind that,’ because when I was there, from what I saw and what I heard, I couldn’t stand behind that.”

Akshaya Natarajan, off-campus senator and second-year political science major, said she understands the concerns of the students attending the Career Fair, but A.S. does not understand what undocumented students go through.

“These are very valid concerns, and I completely understand that this is definitely a shame that students felt uncomfortable and perhaps personally attacked, but we also have to keep in mind that most of us sitting at this table are not in the shoes of these people,” Natarajan said.

Later in the meeting, “A Resolution Directing the Executive Director to support The Green Initiative Fund Grant Application for BigBelly Solar Compost, Recycling, and Landfill Bins at the Pardall Center” was sent to immediate consideration, where it was passed unanimously.

Sad that Larrazolo has to go through this. This is what happens when you form cliques around your personal identities rather than shared interests.

Sounds like Larrazolo should resign, with all his talk of grand conspiracies.

That kid sure talks a big game, I say let him resign.