Following a 76-60 victory last Saturday night at UCI, the UCSB men’s basketball team looks to capitalize on its momentum with a two-game home stand beginning Thursday night against the University of Hawaii. 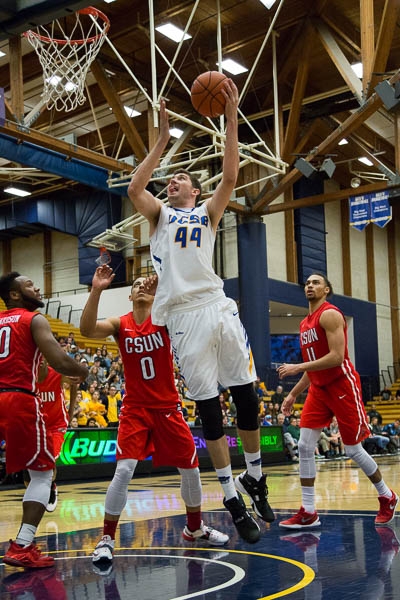 After slipping through an opening in the defense, Sam Beeler slam dunks. Dustin Harris/Daily Nexus

“It’s a quest you’re on when you’re [playing] during the season,” Head Coach Bob Williams said. “The response on Saturday of mental toughness, physical toughness, and being the team to finish the game was a real improvement for us.”

The Gauchos prepare to face one of their toughest conference opponents this season as the Rainbow Warriors enter the Thunderdome with an overall record of 16-3 and 5-1 in the Big West. While it hasn’t been the hottest start to the season for Williams and his team, Saturday’s big win could potentially signal a turning point for the Gauchos who currently stand among the middle of the pack with a record of 9-11 overall and 3-4 in conference.

After helping UCSB hand the Anteaters their first loss in conference play, Williams expects the skilled play of wing guards Eric Childress and T.J. Taylor to translate over to this week’s match.

Childress has found his niche as the floor general for UCSB after taking over for former senior and starting point guard Zalmico Harmon. The junior from Hawthorne is among the top guards in the Big West in shooting ability and ball handing, leading the conference in three-point percentage at 51.2 percent and ranking third with an average of 4.5 assists per game.

“The play of Eric has steadily grown throughout the year,” Williams said. “He’s played exceptionally well this last month having one of the best assist-to-turnover ratios on the West coast and shooting from over 50 percent beyond the arc.” [Eric] is really making strides as a player, leader, and helping run the show for us so I’m really proud of him,” Williams said.

The development of Childress has been evident this year and as of recently he has averaged a total to 10 ppg in the team’s last five contests.

For Taylor, the senior guard is embracing his role as the sixth man for UCSB. Following a six-game drought without scoring a basket, Williams believes Taylor’s eight point outing on Saturday will open up more opportunities for him as he continues to play quality minutes behind Childress.

“T.J. hasn’t really had any real opportunities [these past couple of games], but for him to snap out of it and hit a couple big shots was a real spark plug,” Williams said. “He is beloved by this team and to have him step up and contribute was special.”

It’s been a steady incline for the 5-9” Oakland guard after sitting out the entire 2013-2014 season with a medical redshirt. As his minutes increase, Taylor’s shooting ability will likely draw opponents and leave the floor open for guards Gabe Vincent and Michael Bryson.

As for first-year Head Coach Eran Ganot and the Warriors, Thursday will also be a defining moment within their conference schedule after having their seven-game winning streak snapped at home by senior guard Nick Faust and the Long Beach State 49ers.

Hawaii fell to the ‘Beach’ 78-64 last Saturday as Faust erupted for 28 points on 5-8 shooting from downtown. With hopes of bouncing back from the loss, Ganot will likely utilize his deep rotation of guards in Thursday’s matchup by running the team’s offensive sets through All-Big West players Roderick Bobbitt and Aaron Valdes.

The two guards have been the offensive anchors for the Warriors combining for a total of nine 20-plus point outings this season. The only duo to exceed that this year are UC Riverside’s own Taylor Johns and Jaylen Bland leading the conference with 14 20-plus scoring performances.

Third year forward Mike Thomas looks to have a strong presence on the road as well finishing with a career-high 20 points in last week’s loss to Long Beach. The junior has been a mismatch against bigs down low using his speedy 6’7” frame to slash by defenders and finish at the rim. Thomas went 7-11 from the field on Saturday.

UCSB begins its home stand against Hawaii this Thursday, Feb. 4 at 7 p.m. The Gauchos will also welcome Cal State Fullerton to the Thunderdome on Saturday, Feb. 6 at 7 p.m.