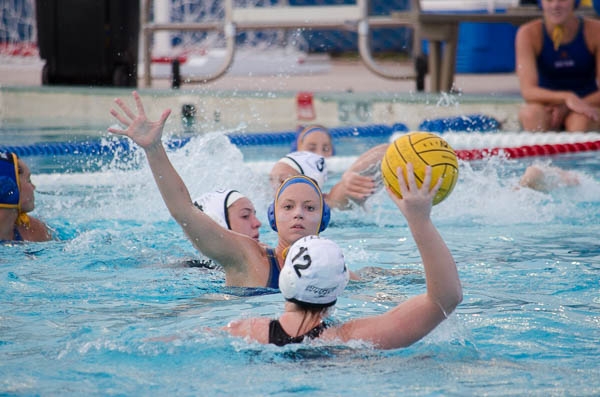 The No. 11 UCSB women’s water polo team wrapped up its first away games with a 3-1 record at the Michigan Invitational, including two back-to-back overtime wins.

Santa Barbara is now 6-3 overall in the season after this past weekend.

It was a thrilling first day for the Gauchos as they scored a pair of wins against No. 17 Hartwick and No. 12 Pacific, both in overtime.

UCSB saw its first action of the tournament against Hartwick. It was junior defender Sophie Trabucco who opened up the scoreboard at the 7:00 mark. However, the Hawks quickly responded with three consecutive goals from Katie McKenty, LJ Edwards, and Lauren Brennan.

Hartwick once again came out strong in the second quarter and went on another 3-1 run putting them in the lead 6-3 with three minutes left in the half. UCSB executed on consecutive possessions shortening the Hawks lead, but the Hawks found the back of the cage in the last second to take them into half time with a two score lead.

The second half of the game was a constant battle for the Gauchos who tied the score in two occasions, only to have Hartwick reclaim their lead shortly after. With little time left on the clock, Santa Barbara turned to senior center Lauren Martin who scored 21 seconds after the Hawks had gained a two-goal lead, and was followed by junior attacker Brenna Thomas on a power play to tie the game.

Although UCSB’s senior attacker Bryn Hudson scored first in overtime, Brittany Tait would give the Hawks another chance by forcing the game into sudden death. This was the first time Santa Barbara had gone into sudden death so far in the season.

It was Martin who won the sprint to give UCSB the first possession, in which she capitalized with the winning goal after 21 seconds to finish 15-14.

The second game of the day proved to be just as challenging for the Gauchos who came out on top after another overtime game against Pacific.

Carrying on the momentum from the first match, Martin scored back-to-back goals to start the game. The Tigers found the back of the net on three occasions to end the first quarter in a tie.

Junior utility Taylor Shore reclaimed the lead at the start of the second period, scoring on her own rebound after her shot had gone off the post the first time.

The Tigers had a comeback in the second quarter. For the first time in the game they took the lead after a penalty shot taken by Rachel Krieger. Pacific was now on top with a two-goal lead by the halftime break.

The Gauchos quickly came back and tied the game within the first minute of the third period with the help of Thomas who set up senior utility Samantha Murphy and Martin on back-to-back possessions.

The seesaw battle carried on to the last period, in what looked like the Tigers would pull off the win after scoring with only 38 seconds left. But the Gauchos drew an ejection foul and took advantage on their last possession, with Shore scoring the equalizer with 13 seconds left on the clock.

Santa Barbara scored first in overtime with Shore assisting Martin, followed by freshman defender Kristen Denney to end the first OT period. The tigers tried to fight back, but their goal from Ellen Tiedmann was retaliated by junior utility Miranda Schrader securing the win for the Gauchos, 13-11.

Martin finished the day with a total of seven goals, including a team-high of four goals against Pacific making it the second game in the season in which she collects that many. Contributing to the day’s success were Hudson, Schrader, and Thomas with four goals of their own.

The Gauchos split the final day of the invitational falling to No. 7 Michigan, the top ranked team in the tournament, in a 14-8 loss and another nail biter win over No. 15 San Diego State.

The Wolverines scored the first goal of the game, but were answered by Thomas to put UCSB on the board. Although the Gauchos scored once again, they also allowed two goals sending them into the second quarter behind Michigan 4-2.

Santa Barbara scored on three occasions in the second quarter, two of them coming from Murphy, but Michigan put away four unanswered goals to stay on top.

The 11-5 lead by the Wolverines proved to be too much for the Gauchos despite two goals by sophomore utility Camila Schafer and Kreiser. Michigan sealed the deal with three more goals to end the game with a six-point deficit.

The final game of the weekend resulted in a 9-8 victory over SDSU.

The Aztecs got on the board first, but their lead only lasted 12 seconds thanks to a hat trick delivered by Murphy. The Gauchos would then go on a 3-0 run, including two from Murphy. San Diego put away three of its own, but were unable to take the lead ending the first period trailing UCSB 4-3.

Although the second half of the game fluctuated between a one or two point difference, the Gauchos never let SDSU tie it up.

Santa Barbara went into the final quarter up 8-6, but the Aztecs found the back of the net at the 6:11 mark putting them within one point.

Thomas scored the last goal for the Gauchos, and although Tayla Walsh responded to it, it was not enough to come out on top.

Defense took care of the remainder of the game not allowing any more goals from the Aztecs and senior goalkeeper MacKenzie Broakaw recording a late-game save.

The Gauchos will resume play on February 13th at the Triton Invitational.