The Daily Nexus
Sports Blogs
Ending Moments of Manning’s Reign and Beginnings of Newton’s Peak Coincide in Super Bowl 50
February 2, 2016 at 5:06 am by Jorge Mercado

Super Bowl 50 has so many intriguing storylines it is absolutely appalling. However, quite possibly the most interesting storyline is the Quarterback match-up between the new breed of flashy yet still savvy pocket awareness in Cameron Newton, and the prototypical, old-style pocket passer, Peyton Manning. 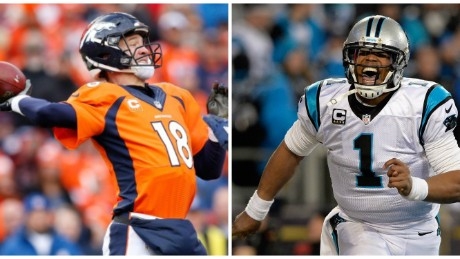 The two former No. 1 overall picks have both enjoyed success in their career—with Newton’s defining moment coming next Sunday when he tries to become the 31st quarterback to win the Super Bowl—yet their play-styles are completely different.

Newton seems to be the new hybrid quarterback having both the ability to run like a halfback yet still have the arm and awareness to be a great NFL quarterback. In his first five seasons the Carolina star has run for over 3,200 yards and 43 touchdowns while still throwing for 18,263 and 117 touchdowns.

Aside from his hybrid style of play, Newton is also not your prototypical quarterback in the sense that he has a lot more flare and personality. Quite frankly, Cam is known for his “dabbing” and enthusiastic celebrations just as much for his play and that is not a bad thing.

Fans—especially Carolina fans—and some media members love the fact that there seems to be a breath of fresh air. Newton seems to be the perfect combination of humble yet supremely confident that he can and will dab on his opponent after making a tremendous play that transcends anything we have seen before from the quarterback position.

On the other side of the spectrum we have the Peyton Manning, the man who could possibly be ending his brilliant career next Sunday after his fourth Super Bowl appearance and possible second Super Bowl ring—and his 200th career victory making him the winningest quarterback in NFL history surpassing Brett Favre at 199.

Manning is the prototypical, old-style pocket passer who is on his last legs. The former Tennessee quarterback is a surefire Hall of Famer. He has passing records in most passing touchdowns and passing yards in a career by throwing for 71,940 yards and 539 touchdowns. To this day, Manning is looked as one of the greatest quarterbacks of all-time for his innate passing ability.

His play style is completely reliant on his ability to successfully throw the football. Unlike Newton, Manning is not known for taking off and running the football—besides that first down last week in the AFC championship game—yet he has successfully built his career as one of the best passers ever.

Although the Denver QB will be in Canton, Ohio one day, the fact remains that he is in the midst of his worst season statistically. This season Manning has thrown career lows in passing yards, passing touchdowns, completion percentage and is having the worst season in total QBR.

Yet even with his worst season ever, the Broncos were able to go to their record-tying eighth Super Bowl thanks to their No. 1 ranked defense. At this point in his career, Manning has become essentially a game-manager but that is not necessarily a bad thing.

Throughout his career Manning has been the reason his team has won. The one year he won the Super Bowl in Indianapolis was in large part because he finally had support on the defensive side of the ball.

It’s tough for a quarterback to do it all on his own as Manning has done most of his career but that is exactly what Newton is doing. Although he does have an amazing defense, the Carolina Quarterback has a sub-par talent around him offensively all throughout his career. That is what makes this season so amazing for him and this team.

In a way, it seems very fitting that the Golden Anniversary Super Bowl is a match-up between these two quarterbacks. It is the classic duel between the old guy who has been there and done that and the young flamboyant up-start that is reinventing everything as we knew it.

This years Super Bowl has all the making to be legendary. The game will obviously contain a lot of passing from both quarterbacks since we are now in the passing era yet the most significant passing may be the passing of the torch of one qb to the next.