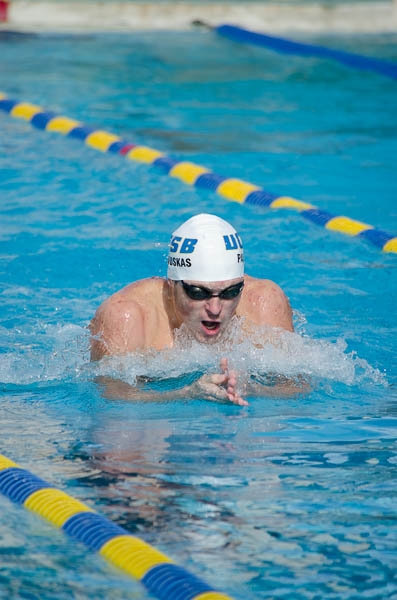 Lukas Paulauskas does the breaststroke during a meet. Christina DeMarzo/Daily Nexus

This past Saturday the UCSB Men’s and Women’s Swim teams capped off the dual meet season with two big wins over rival Cal Poly. The Gaucho men topped the Mustangs 164-97 and women took a 163-117 win. Santa Barbara sent off its head coach of 40 years, Gregg Wilson, in winning fashion in his last collegiate dual meet.

“We all really went into the meet with the mindset to get the W for the seniors and Gregg,” junior backstroker Cheyenne Low said. “All the energy and excitement really amped up our determination to win.”

With this win the men extend their win streak to four straight matches, making them 4-2 on the year. The women finish the regular season at 5-3 overall in dual meets.

The women opened up the meet with the same success they have seen all season long in the relay events. The Gauchos took the top two spots in the 200-yard Medley Relay as both the ‘A’ team and ‘B’ team touched before either Mustang team in the race. Santa Barbara’s ‘A’ team came in at a time of 1:43.58 as Low lead the way with the best time in her heat at 25.94. The ‘B’ team came in at a time of 1:45.09, over three seconds faster than the first team to finish from Cal Poly.

The Gauchos would go on to have a repeat performance in the second team event, the 400-yard Freestyle Relay, as the women took first and second place to tack on another 15 points in the event. The ‘A’ team finished in a time of 3:26.58 and the ‘B’ team came in at a time of 3:28.90.

Low, the defending Big West Athlete of the Week, had a superb day on the individual side winning two events for her team. She started off the day capturing a victory for the Gauchos in the 100-yard Backstroke event touching the wall at 55.73, her teammate sophomore backstroker Elizabeth Pulido followed just behind in 2nd at 58.16. Low capped off her day with another first place outing in the 200-yard backstroke coming in at 2:03.55. Pulido again followed her teammate in grabbing second at 2:07.08.

The men took a dominating win over the Mustangs with help from their top two sprinters, as sophomore Billy Mullis and junior Dylan Kubik found their way to the podium multiple times on the day. Like Low, Mullis took home first place in both the 100-yard and 200-yard backstroke events for the Gauchos at times of 49.77 and 1:48.68. Kubik grabbed second place after in Mullis in the 200-yard Backstroke at 1:51.29 and registered another second place finish in the 200-yard Freestyle at 1:41.60. He then finished out the day in his signature event, the 200-yard IM winning the race at 1:53.00.

Santa Barbara then took a huge advantage and put the meet out of reach for Cal Poly as they swept the 100-yard Butterfly. Sophomore Kevin Mendoza led the way for the Gauchos at a time of 49.65. Freshmen Mason Tittle and Michael Wang sealed the win for the Gauchos coming in second and third at 50.38 and 50.47, respectively.

“The win over Cal Poly boosted our confidence even more heading into [MPSF Championships]”, Low explained. “It was a great victory for both the women and men to take down Cal Poly in our home pool. It laid down the foundation for what we can do in the postseason.”

The Gauchos will have a few weeks to prepare for the MPSF Championships that begin on February 17th in Los Angeles, Ca.