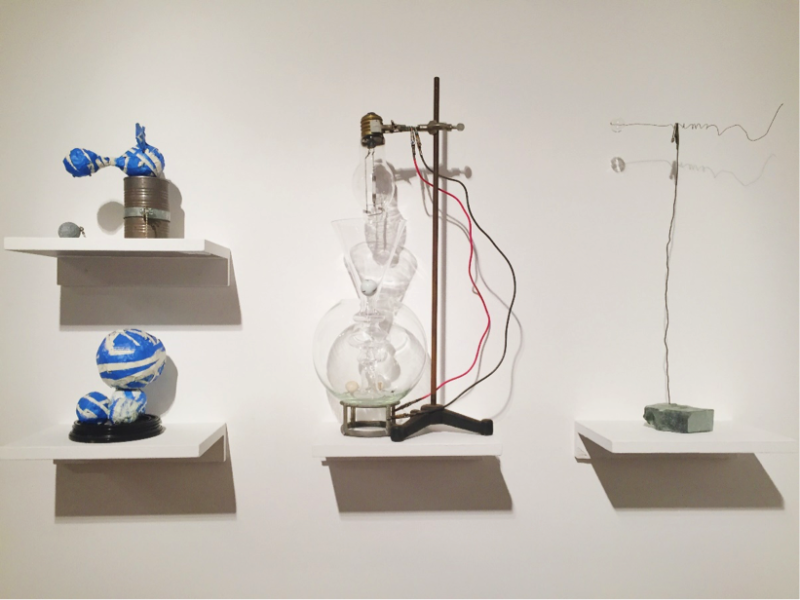 Encompassing the culture and creativity of Santa Barbara inhabitants is the Arts Fund, a nonprofit art gallery in the Funk Zone that showcases local artists. Artists on the rise can display their art to gain publicity. The Arts Fund even offers a Teen Arts Mentorship program, where the youth of Santa Barbara can work under professional artists to hone their skills for 10-12 weeks, followed by an exhibition of their work in the gallery.

The Arts Fund also allows guest curators to host exhibits utilizing local artists. Last year, SB-based Hugh Margerum and Ventura-based Keith Puccinelli discovered that they have both accumulated collections of spherical objects, colloquially known as balls, in their careers. A strange trend, but one that inspired Margerum’s proposal of Artists’ Balls, which he curated under the message, “It takes balls to make art.”

I attended an artists’ talk at the gallery where I heard some of the artists describe their work. (Among the other attendees were some frequent Arts Fund visitors, including fellow patron Roseanne.

“I want to have a ball,” she said when asked why she was there. (There were many, many more puns to come.)

Margerum, the first one interviewed, revealed his fascination with the idea that spherical things are completely universal; the most microscopic along with the most massive objects are spherical. Later on, when I asked Margerum about his previous work — abstract and colorful oil paintings that I noticed include many circular shapes — he said he likes to think when people look at them, they can take on their own interpretations, and each one will be unique because of this universal feature of the spherical shape.

For instance, Bonnie, the woman sitting to my right, was already a fan of Margerum’s work and owns one of his oil paintings. Hers has two large, colorfully abstract circles which she believes are reminiscent of the sun.

Bonnie is a fan of architecture, and mentioned that her favorite room is a circular one she remembers from her time at UCLA. I asked why she was drawn to Margerum’s work.

“If I could only have one shape, it would be round,” she said.

Next up was Dug Uyesaka, assemblage artist. He confirmed Margerum’s previous comment; he did indeed have lots of ball-shaped items stowed away. Two of his sculptures were made of balled-up painter’s tape — literally leftover from painting his house — and the other two, which he referred to as his “junior science” projects (really, isn’t an art exhibit just a science fair?), are made with lightbulbs; he likes their “translucent and reflective” properties. Uyesaka’s small sculptures were my favorite exhibit, especially the two made with lightbulbs which he confirmed, upon audience inquiry, do not actually work; they’re just for show.

Then there was Carlos Grano, who initially wasn’t interested in partaking in Artists’ Balls, but he said he started toying around with the idea of negative space — inspired by a conversation about the inside of a football “as though the interior is a concrete object” — and he decided on an exhibit of cement footballs. After explaining his creative process, he brought up an interesting fact about footballs: While indeed balls, they aren’t even spherical.

Before attending this talk, I wondered: What is so ballsy about art? Creating art is a difficult feat, but I never considered artists as ballsy; I just saw them as these laidback, creative beings. Margerum’s response was that when it comes to putting together an exhibition — an art in itself — there’s nothing predictable about it. He was only even familiar with two of the nine artists in the group, so he didn’t know exactly what to expect from them. When the artists themselves respond to the proposal, they don’t yet know what they’ll create. Ultimately, there’s just a unanimous feeling of uncertainty.

Uyesaka and Margerum agree that group exhibits are challenging for curators and artists alike. For Uyesaka, there’s a certain way of doing things. A themed exhibit means working with someone else’s initial inspiration, so he finds himself having to “procrastinate, then jam on it.”

The talk ended with a woman standing up and telling Margerum how much she appreciates his work on this exhibit, (speaking for all of us, really). I recommend heading out to Santa Barbara to check out Artists’ Ball — displaying the work of Margerum, Puccinelli, Uyesaka and Grano, along with Ann Diener, Julia Ford, Colin Gray, Giuliana Mottin and Tom Stanley — before the last day, Jan. 30. Make sure to look out for the full-fledged pair of testicles hanging from the ceiling (made by Puccinelli himself); oddly enough, they’re easy to overlook.

The title of this article is misogynistic and exclusionary to women and male-identifying female-bodied trans women.
Yet another example of how UCSB’s culture demeans and oppresses everyone who isn’t a white, straight, cisgendered male. I’m going to make a petition on change.org to get the Nexus (aka the Sexus, like sexist) to issue a public apology, fire its staff, replace it with a diverse group of race/sexuality sensitive individuals, and distribute half of its profits to on-campus social justice organizations.

Read the article you social justice whining sack of shit

I don’t know who you know that works on the Daily Nexus but… I’ve seen them all and that’s one fucking diverse group of people, who, in no way would ever post something targeting another group. Also you know that the Daily Nexus makes shit profits right? Do you think the money goes towards like Trump campaign rally’s or something? No, it goes to students, that care about UCSB. I think you just need to read the article broseph and see what the author is really trying to say. I understand your concerns but posting on someone’s article that just… Read more »

I almost fell asleep reading it…. If you wanna see art just look at nature