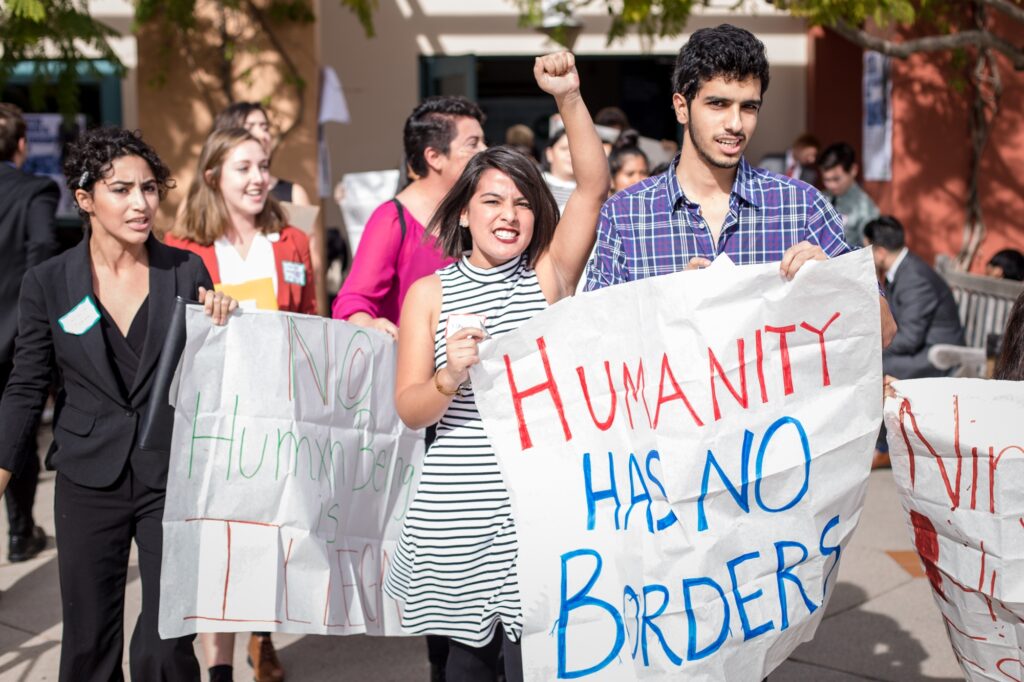 More than 50 students staged a protest against the U.S. Customs and Border Protection (CBP) booth at the Winter Career Fair on Thursday, claiming CBP participates in human rights abuses against those attempting to enter the United States.

The protesters gathered at Corwin Pavilion, just outside the Career Fair in the Multicultural Center, chanting “Fuck your borders, fuck your walls!” and holding up signs in opposition to CBP and its policies. At one point, student protesters wearing duct tape over their mouths went inside the Career Fair and blocked the path to the CBP booth before being directed by protest organizers to return outside and continue chanting.

Lorena Alvarez, second-year English major and publicity co-chair of the Associated Students Student Initiated Recruitment and Retention Committee, helped organize the event and said she was inspired by the students who participated.

“I’ve been working tirelessly with the coalition that essentially planned this protest,” Alvarez said. “I’m very proud to have taken part in the planning and I’m just inspired by all the people who came out today and the fact that we were able to make our presence known.”

Alvarez said the event was meant to serve as a message that the university should stand by its status as a Hispanic-Serving Institution.

“As a Hispanic-Serving Institute, I feel like we should stick by that name and have students feel safe on this campus,” Alvarez said. “By having Customs and Border Patrol on campus, they absolutely do not feel safe; a lot of my friends were triggered today and I blame Career Services and the university for not protecting them.” 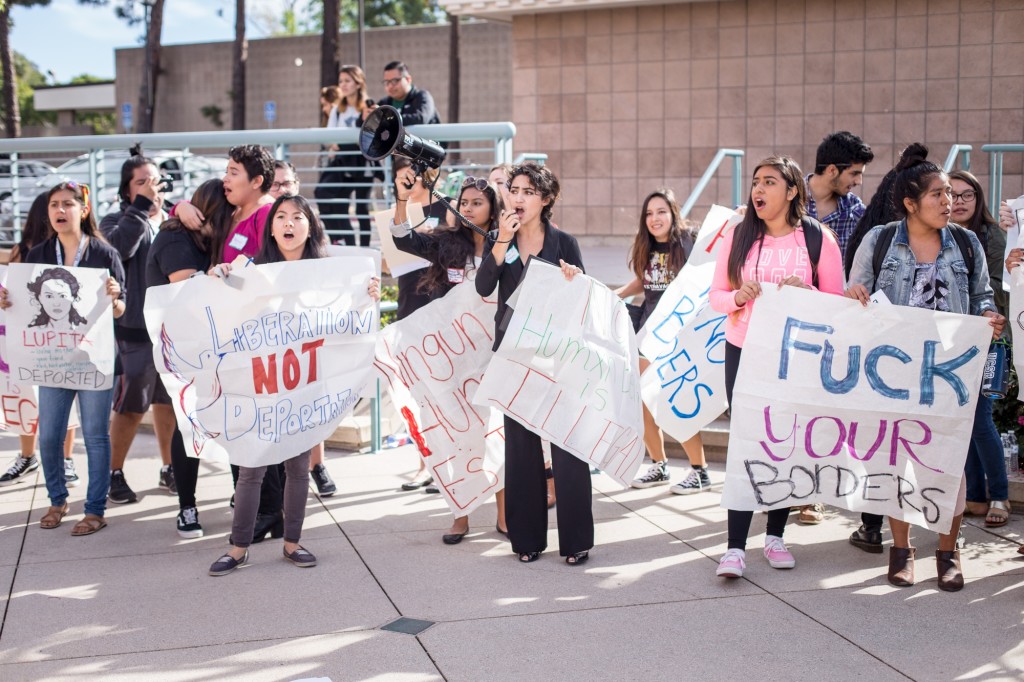 Clinton Cox, a supervisory border patrol agent of Customs and Border Protection, said CBP was at the Career Fair to provide information and opportunities to interested students, and that CBP’s goal is to defend American borders.

“We’re here to offer advice and potential career opportunities to all the students who are interested here,” Cox said. “We’re America’s front-line defense against terrorists and terrorist weapons, and we try to prevent the illegal flow of illicit material and/or narcotics and contraband, and to facilitate trade.”

Outside the MCC, four protesters covered in fake blood lay motionless on the ground, representing the undocumented migrants who died trying to cross the border into the United States. Around them, protesters yelled, “¡La gente unida jamás será vencida!” meaning “The people united will never be defeated!”

Juan Gonzalez, fourth-year economics and accounting major, said the protest was an affirmation of human rights.

“It’s obviously a good thing because we’re protesting human rights violations,” Gonzalez said. “There’s a lot of people who die trying to cross the border, trying to have a better life, and these immigration officers make it harder than it’s supposed to be, so I think it’s good to bring attention to these issues.”

About three hours into the event, protesters marched into the MCC and stood in front of the CBP booth, holding up signs and wearing duct tape over their mouths, before being directed by protest organizers to return outside and continue chanting.

Cox said CBP was not upset by the protest and encouraged peaceful demonstration.

“They have a belief that they believe in, and they don’t necessarily believe in the mission that we are tasked to do,” Cox said. “As long as it’s a peaceful demonstration, it doesn’t bother us one bit, and we encourage people to exercise their first amendment right.”

Toward the end of the event, tensions flared as a number of students with dissenting opinions arrived outside the MCC to talk with some of the protest’s supporters.

Jason Garshfield, fourth-year political science major, said he felt the protest was ineffective in creating a discussion about immigration laws.

“They’re angry that CBP is having a booth at the Career Fair, and I think that’s somewhat silly because those agents aren’t here to deport anyone,” Garshfield said. “I don’t totally approve of our immigration laws—I think they need to be reformed and I think that that’s a legitimate debate—but when you get 100 people together chanting the same slogan, that’s not something that’s encouraging debate.”

“In a society, you have to enforce laws, and those laws exist, be they just or unjust,” Zierer said. “There are ways that we can look about maybe making legal immigration easier. We can look at more common-sense solutions than just allowing no enforcement of the border, which potentially could be very harmful to the migrants themselves.”

Alejandra Melgoza, Associated Students senator and third-year Chican@ studies and sociology double major, helped organize the event and said the protest showcased the need for the university to provide more resources to the undocumented community.

“I believe we need to support the undocumented community because they need more resources on our campus,” Melgoza said. “And as a research institution, we should able to provide the services that we need for our community.”

“Hispanic-serving?” Could have sworn that the university serves ALL students. This kind of Brown Female Supremacy should not be tolerated on our campus; I DEMAND an investigation by the university of the person who said that.

I know you’re trolling, but in case people didn’t know, a Hispanic-serving institution is an institution that serves a relatively large percentage of Hispanic students. The Daily Nexus failed to mention that (as always). http://www.hacu.net/assnfe/companydirectory.asp?STYLE=2&COMPANY_TYPE=1,5

Brown Femmes are beautiful. Radical Beauty is not loving your best traits but being beautiful because of it. We brown and black womyn are proud of our culture and if that’s a threat to you go back to your cave

Just what is a Hispanic-serving institute?

Protesting is protected under the First Amendment, but at what point does the campus police step in and ask them to clean up their language? You do have campus police, don’t you? And your paper does have adult editors, doesn’t it-again to clean up your language.

As for the CBP, they are only enforcing the law and at great personal risk. They deserved better.

Once again, UCSB has embarrassed itself.

Never been a migrant a day in your life. Try showing some empathy – it’ll make you less of a stuck up asshat

Campus police shouldn’t be in the job of telling people to clean up their language. I understand your anger at some of the groupthink on our campus, but any sort of police censorship is contrary to the purpose of the university.

I think the greater point is that these students were unaware of whether or not they were in danger of that, which is a very real fear undocumented students face on campus every day.

I agree with Jason’s comment though, it’s not UCPD’s job to tell students what they can and cannot say. Nor is it the Nexus’ job to censor things. That is, after all, the basic tenet of the Daily Nexus or any independent news source.

A Hispanic Serving Institution is a university or college where Hispanic enrollment is at least 25% of total enrollment. More info here: http://www.hacu.net/hacu/HSI_Definition.asp

Triggered? The only thing that should be triggered are the deportation orders.

Triggered by breaking the law I’d say. I don’t support Trump, but I agree with him on illegal immigration – if you’re here illegally you need to go back home. I also support going after employers who hire illegals. America is not the solution to the economic and social justice woes of the Third World. The social justice warriors are fighting in the wrong arena. Friend was telling me all the Republicans at the debate Thursday night were talking about withholding federal funds from institutions that support illegal immigrants. You’re a sanctuary city-no federal dollars for you. You’re an university… Read more »

I found the protest rather overwrought and uninformed, among other issues. A good portion of the rhetoric was so expansive as to be against the very idea of nation states. Every nation has an interest in affirming and defining it’s borders, and a responsibility to develop laws that govern human migration humanely; it’s that responsibility we’ve been failing at lately, but the protest misguidedly targeted our interests. Targeting an agency at a career fair doing nothing whatsoever to cause offense there beyond existing just came off as silly.

The border patrol is not ICE. They rescue tons of lives, and don’t even always deport people. Oftentimes they take dehydrated migrants to hospitals where they’re treated and then walk out. A lot of their job is to pick up corpses. They also protect against dangerous individuals and narcotics. They’ve spent their own money building towers for migrants to go to and call for help if they’re in dire condition. Obviously it doesn’t solve bigger problems like the reasons migrants come here in the first place but they’re not the ones making laws! Do some research! And have some respect!

It was a beautiful protest. The most moving part of the protest, in my opinion, was when participants shouted gracefully into a loudspeaker “F@&K YOUR BORDERS, F@&K YOUR WALL!” This powerful chant made me shed a tear, I must admit. The chant “QUEER, QUEER AND UNASHAMED!” was quite moving as well.

I urge fellow UCSB alumni to do as I do, when I get calls or letters asking for money. I cite actions such as these, and tell them NO.