The Daily Nexus
Opinion
What’s Really Wrong With the Ratio at Parties
January 28, 2016 at 5:00 am by Sabine Hrkalovich 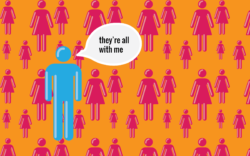 Who doesn’t like going to parties? This is a rhetorical question, evidently, because literally almost everybody likes going to parties. But who likes the patriarchy? Nobody, that’s who. The average reader may think that partying and the patriarchy have next to nothing in common, but that reader clearly doesn’t go to college and certainly doesn’t party in Isla Vista.

Here’s the thing: Most of the parties that take place on any given night in I.V. have “ratios,” or the number of guys to girls that should be present. It’s common knowledge that girls should out-number guys, maybe five girls to one guy on average. This is not only expected of frat parties, but of regular house parties as well. Let me break this down.

First of all, keeping a ratio at parties that favors the male attendees is very sexist. It perpetrates an environment and culture where heterosexual men are given whatever they want with little to no regard to what benefits everyone (meaning women, trans people, gay people, et cetera). This pretty much sums up a patriarchal society. That is not to say that heterosexual men shouldn’t get what they want — I’m all for treating yo self. What I am saying is that this standard, where ratios are enforced that strictly benefit the aforementioned heterosexual male, is damaging to everyone else who likes to party (which is pretty much anyone ever). We, as women, are being told that what we want is not important. Do you think girls like partying with a bunch of other girls while, at most, 20 ok-looking guys stand around waiting to get lucky? It’s not a tough question: the answer is very obviously no.

Secondly, enforcing a ratio at parties automatically assumes that everyone in attendance is heterosexual — really, really not a true thing. Heteronormativity, which is the aggressive perpetration of heterosexual standards, completely leaves out anyone who isn’t heterosexual. Straight people aren’t the only ones that like to party, ok?

Finally, I’m taking up issue at how casually this topic is approached. It shouldn’t be common knowledge to me or to anyone else that girls will be let into pretty much any party and guys won’t simply because the hosts of party (who are usually men) want a bunch of pretty girls around. Everybody knows that ratios are enforced — that this problem exists — yet we say and do nothing about it. I’m bothered by the fact that the common partygoer doesn’t acknowledge the fact that they’re actively participating in a sexist and ultimately harmful culture. Sure, go to parties and have fun, but at least take a moment to realize how bizarre and destructive enforcing a ratio is.

Basically, what I’m saying is that there’s a problem in our community that flies so far under the radar that nobody seems to notice it’s happening. To maintain ratios at parties that solely benefit the men who are present is completely harmful to everyone but the men who are present. It enforces heteronormative, patriarchal standards that contribute to sexism and homophobia, which are destructive to literally everyone. So how can you distract yourself from this dismal truth? Go out and party! Have a fantastic time! But remember folks, by bringing attention to the dangers of enforcing gender ratios at parties, you can take down the patriarchy at the same time! It’s pretty much a win-win for everyone.

Also no one likes a sausage fest.

“…by bringing attention to the dangers of enforcing gender ratios at parties, you can take down the patriarchy at the same time!” Pathetic. To learn what’s patriarchy, go live in the middle east. This is not patriarchy, this is the professional victimhood of a first-world spoiled teenager who lives in a sex crazed community. Don’t associate this with sexism. Young women are being murdered by their immediate family because they brought shame to the family by being raped. This is sexism. Inadequate supply of “ok-looking guys” is not. I wonder when feminists are going to learn to leave their propensity… Read more »

Throw your own party if you’re worried about ratios. You are entering private property. The fact that the owners/renters want more girls than guys is their own personal deal, not some patriarchy run amok.

I ran parties where we didn’t give 2 shits about ratio, just if you were on the list or not. It was so much fun turning away sorority girls and watching them be confused.

Don’t blame others because their parties aren’t to your liking. Throw your own party or sit down.

So I suppose when women organize a party and try to get more (and attractive) men to attend that’s sexist and a danger of the patriarchy? Or is it an expression of motivation – the desire to speak with, and possible date a man? More selection means better odds.

Have you ever been to a gay club (male or female). The ratios are even more skewed. Where are your feminist sensibilities and criticisms of those environments? Oh, I forgot – with intersectionality means having more reasons to pick on straight white men. The rules only apply to them.

Maybe you should throw your own parties and not enforce the ratios. Don’t complain about a service given to you. That’s right, it’s a service. You don’t have to go to a party if you don’t want to, but if you do and decide to complain about it, no one is going to change anything.

Its not fair, sure, but it’s not your right to go to these parties either. Moreover, why would you want to go to a party hosted by someone who wants ratios and whatnot? They are the hosts, and should be able to do as they please. If you want to “fight the patriarchy” and change attitudes about what is right and what isn’t for how parties should be hosted, throwing the blame on the hosts isn’t going to make them change what they’re doing. Its a moot point. Try again, miss, as there are better…solutions to this frivolous issue. Also,… Read more »

2:3 is best because for everyone, there are less girls who want to get laid, therefore making it economically efficient have more women at a party.

If you wanted to be taken seriously please avoid the use of phrases such as “literally almost everybody”. They make you sound like you’re 14, not a college aged young woman. And though I may not like those types if parties, I do believe people are allowed to do as they wish on private property, your feelings be damned, I suggest you come to understand that. There are many options in IV and you can find a party that meets even your standards. Host a party if you’re so worried. Or at least change your style of writing to match… Read more »