The Daily Nexus
Sports Blogs
An Evening With Carli Lloyd: FIFA World Player of the Year
January 28, 2016 at 5:15 am by Michael Jorgenson 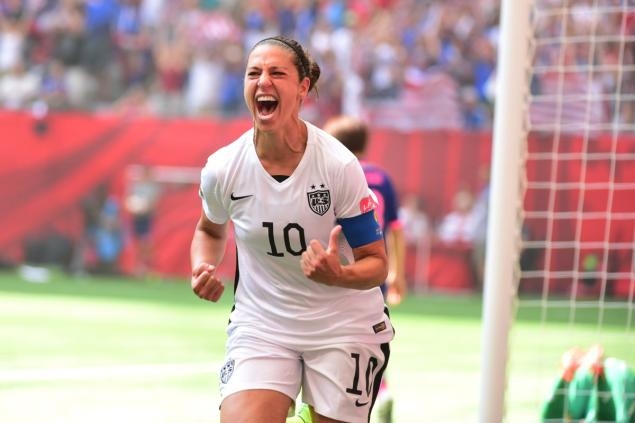 Here in America, it’s not often you get to sit 20 feet in front of the FIFA World Player of the Year.

After all, prior to 2016, only two U.S. athletes had ever been honored with soccer’s greatest individual award: Mia Hamm from 2001-2002 and Abby Wambach in 2012. Those names currently sit at No. 1 and No. 2 all-time for women in international goals scored.

Less than three weeks ago, however, another name was added to the list of Americans who have received FIFA’s greatest honor: Carli Lloyd. This Tuesday at the Arlington Theatre in downtown Santa Barbara, hundreds of fans were given the chance to admire the United States’ current standard of excellence and listen to the inspiring story of a woman who has helped change what the sport of soccer means across the country.

“Life has changed tremendously, and for a good reason,” Lloyd said about the past year. “Women’s soccer has changed and our team has just transcended the game. We’ve reached heights that have been amazing. I’m still Carli from New Jersey and I still train hard on that, but my surroundings have changed.”

Though her name may not be the most recognizable in the U.S. behind the likes of Landon Donovan and Abby Wambach, widely considered the greatest male and female American soccer players ever, when it has mattered most, Lloyd has been the one to step up for her country, and it’s not even debatable.

Since 2008, the United States has reached the final match of the Olympics or the World Cup — the two most important finals the country can reach — a total of four times, coming out as the victor in three out of four of those matches.

In its three final wins, the U.S. scored a total of eight goals. Carli Lloyd scored six of them.

Now, for anyone familiar with the sport, it is a well-known fact that soccer isn’t all about goals; just ask any excellent midfielder who has been overshadowed by a forward that puts up better looking numbers than they do.

In this case though, especially in a country that tends to reward tangible statistics as more valuable than the true impact any player brings to a given team, it is nice to see a U.S. athlete that is both rewarded with, and indisputably considered to be deserving of, the award.

After a highlight reel of some of Lloyd’s greatest moments opened up the night, the eighth-most capped player in U.S. women’s soccer history with 212 career appearances came onto the stage to an ecstatic reception and was showered with applause throughout the night. After catching the audience up on her latest exploits, including a hat-trick against Ireland just five days ago, she was ready to give advice to the hundreds of young girls and boys in the crowd on what it takes to reach the highest level of soccer.

“It’s not enough to just practice it a couple times a week. You basically have to do more than the person next to you, and that’s sort of my motto,” Lloyd said. “I train on every holiday — Christmas, Easter, Thanksgiving — because I know that nobody else is training, and that gives me the extra edge. You look at every other person in this world that’s successful; Steve Jobs knocked on every person’s door, and the 50th person said, ‘Okay, I like your idea,’ and now everybody here has an Apple product. It’s just about being persistent and working hard towards that dream and goal of yours.”

Now at the age of 33 and standing atop the world of women’s soccer, Lloyd has cemented her place in the history of the sport. However, as many in the audience found out Tuesday night, she did not have the easiest path to stardom.

“Throughout my youth days, I was always the best on my team. I practiced a lot, I was super passionate about soccer,” Lloyd recounted. “Then, I get selected for the U-21 National Team, and I was like, ‘Wow, I’m not that good.’”

At that point, Lloyd went from being the perennial top player on her team to someone who had to compete to get on the field at all.

“My third year, my coach, Chris Petrucelli, was the first one to be fully honest with me, and he basically told me, ‘You’ve got loads of talent, but you’re not displaying it, you’re not working hard enough, you’re not fit,’” Lloyd said. “That was the first moment in my life that I had actually heard criticism and I was like, ‘What is this about? I’m 22, I’m perfect.’”

After approaching her parents about her concerns over whether or not she should continue to pursue a career in soccer, Lloyd was lucky to be paired with trainer James Galanis, who had landed a job coaching her brother’s soccer team close to where Carli lived.
“James basically told everybody that he was going to get me on the national team and turn me into one of the best players in the world, and everybody laughed at him,” Lloyd said. “We’ve been working towards this dream and goal for the last 13 years, and here we are today.”

Lloyd was then asked to recall her experiences playing for the USWNT, from her nervous first cap to the Americans’ dominant World Cup winning run in 2015 in which she was awarded the Golden Ball for the tournament’s top player.

The moment that most fans could have expected, and one which Lloyd has surely come to be exhausted with talking about over the past six months, finally came when the 2015 World Cup Final against Japan was brought up.

After the U.S. fell to Japan in a penalty shootout in the 2011 World Cup Final, the following four years were a journey of redemption for Lloyd and her teammates as they looked to finish atop the rest of the world for the first time since 1999. Thanks to Lloyd’s brilliant first half performance this past June, which saw her not only record a hat-trick through the first 16 minutes, but also arguably the most memorable goal in U.S. soccer history on a chip-shot from the midfield line, the Americans went on to a convincing 5-2 victory.

“I remember looking at the clock 22 minutes in and thinking, ‘Just blow the whistle,’” Lloyd said. “When that whistle blew I was just so mentally and physically drained, I just dropped to my knees. You almost just want that moment to pause, because it’s over in the blink of an eye.”

After years of watching the United States’ No. 10 jersey dominate the world at the highest level of women’s soccer, it was a surreal experience to be seated so close to her that when I swallowed water down the wrong pipe and began coughing uncontrollably, I was faced with the fear that I might distract her in the middle of her speech.

Thankfully, that either didn’t happen, or she was professional enough to ignore it and continue speaking with a level of class and humility unmatched by any of her peers that I have had the chance to witness. Not surprisingly, one of the most pertinent topics of the hour and 15 minutes she spent on stage was the impact that she and her team have had on the American youth.

“If I can be a role model and help inspire all these younger generations, that to me is priceless,” Lloyd said. “I want to instill values and things that you should do on and off the field so that all of you young folks watching can pick up on those things.”

I still remember the first game I ever saw of the USWNT, in an exhibition all the way back in 2007. The men were coming off a disappointing group stage knockout in the 2006 World Cup in Germany, and soccer remained an unimportant sport in the world of sports in America.

Yet, despite the United States’ lack of awareness for the most popular sport on the globe, I thought to myself, ‘This team is amazing. They could beat the men if they played them.’ Since that time, Lloyd and her teammates, including Wambach, Megan Rapinoe, Alex Morgan and many others, have helped transform the meaning of soccer in America and prove that it deserves a spot alongside the country’s other major sports.

Don’t believe me? How about the fact that the U.S.-Japan World Cup Final in 2015 was the most-watched soccer match in U.S. history, bringing in 25.4 million viewers across the nation and 61 million worldwide?

Or how about the fact that FIFA 16, the latest installment of the world’s best-selling sports game, featured the USWNT’s own Alex Morgan on the cover and gave players the chance to use women’s soccer athletes for the first time in history?

Or how about the fact that the National Women’s Soccer League, founded in 2012, is heading into its fourth season, surpassing the three-year expiration date that faced both the Women’s United Soccer Association and Women’s Professional Soccer in 2003 and 2012, respectively?

“We’re now entering our fourth year, which is a good sign,” Lloyd said. “The awareness is good. We just have to continue to sell seats and get people to the games.”

Thanks to the efforts of Lloyd and the rest of the USWNT, soccer has discovered a new meaning in the United States. Now, the world’s top player and her peers are only concerned with how to carry on with that progress and continue inspiring young athletes everywhere to make their own mark on the sport.

“We’re really transforming the sport, it just continues to get better,” Lloyd said. “The ‘99 World Cup was a big turning point. The last couple years have been a huge turning point, and a couple years from now when I hang up my boots, I hope it’ll be better than it is now.”

The young soccer players in the audience who shared Lloyd’s love of the sport didn’t have to look far for the right role model to help them get where they want to be someday.

She may be sitting atop the pinnacle of world soccer today, but regardless of who she is now, Carli Lloyd was once just a girl from Jersey with dreams of making it big. 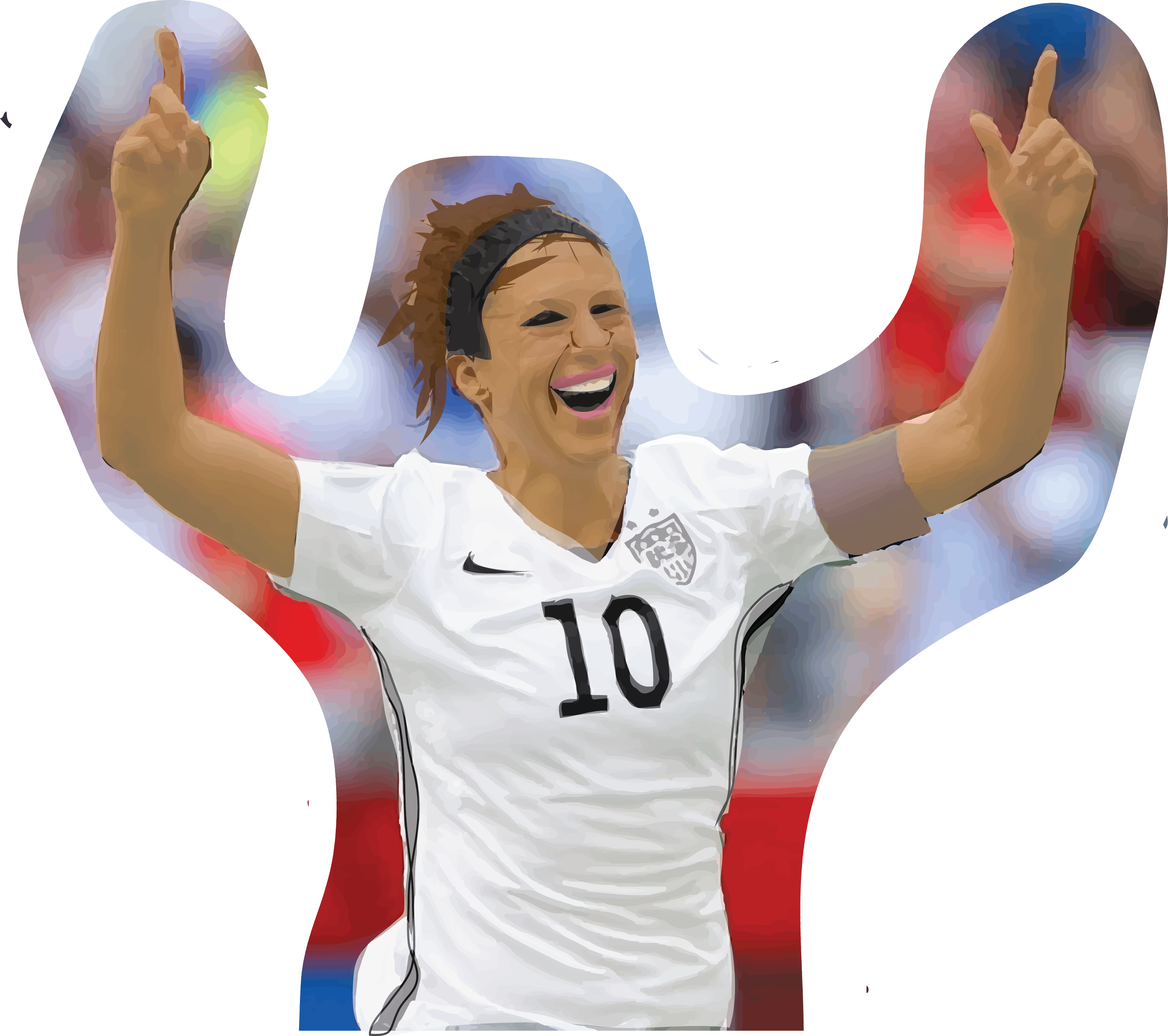 A version of this article appeared on page  of January 28, 2016’s print edition of the Daily Nexus.