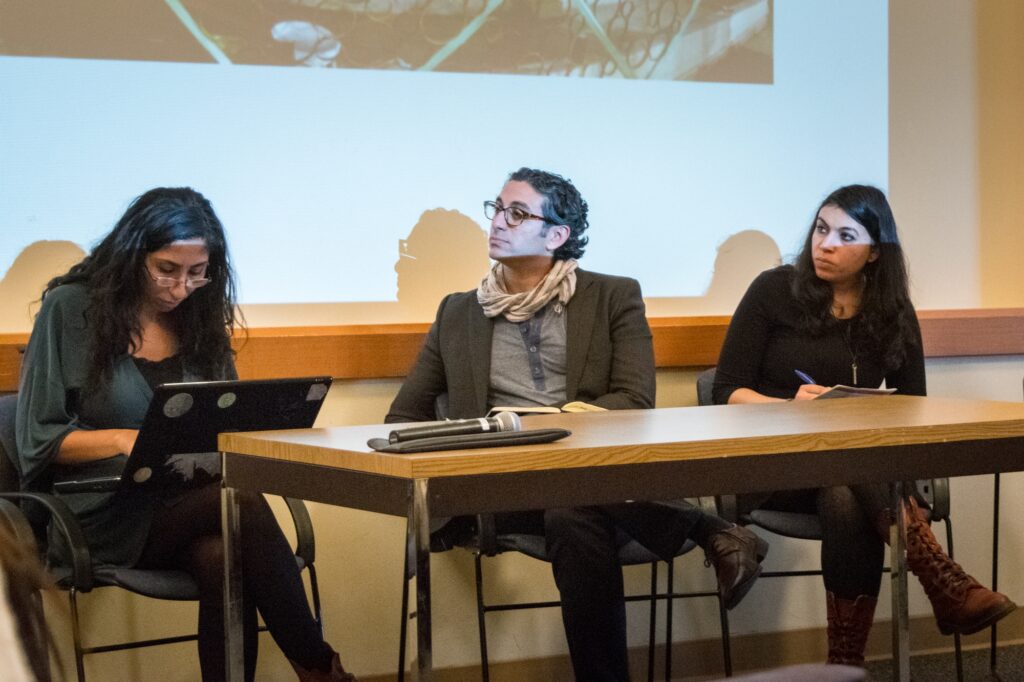 The four-day conference, organized by UCSB Professors Paul Amar, Sherene Seikaly and Laila Shereen Sakr, featured journalists, activists, artists and professors who spoke about the worldwide impact of the Revolution and how the Egyptian public continues to grapple with its implications. Many of the speakers have witnessed and experienced tragedy and violence, but use their narratives as tools to mobilize change and hold their oppressors accountable, whether through the media, art or memory.

During Monday’s first panel, Egyptian visual artist Heba Amin spoke about how she and other Egyptians were “caught between hope and despair” during the time of the Revolution, which continues in an ongoing narrative.

“The sense of possibility was real, or at least that’s how I remember it,” Amin said. “The past must become part of our present.”

Amin also spoke about how technology was a key factor in the Revolution, as it allowed people to mobilize. Even though the Internet was shut down for almost a week, Amin said the “sentiment that people wanted to preserve their voice for eternity” persevered and started a worldwide discussion.

The next panelist, curator Sarah Rifky, said the revolution was a way to show the government that its oppression and corruption cannot “fool” the people with “empty promises and sweet talk” and said “patience has its limit.”

Although Rifky felt out of hope, support and imagination in some moments, she said art spaces pose a threat to the agenda of the government, and even art’s “imaginary conception of what it is and does” is extremely powerful.

Each activist emphasized that the Egyptian Revolution led to a movement of “global solidarity” that can be related to movements all over the world such as Black Lives Matter and protests throughout Libya, Syria and Yemen.

Journalist and blogger Wael Eskandar spoke about how one’s memory can serve as a weapon in the face of revolution.

“The story needs to be told and there is more of the story to be told,” Eskandar said. “To be part of the Revolution is not primarily an Egyptian thing … the narrative is global.”

Eskandar said the Revolution will endure through memories as a “moral stance.”

“[The revolution] is neither dead, nor triumphant — it continues,” Eskandar said.

According to Eskandar, many Egyptians “cannot forget the blood,” and memories of the protests will stay with them.

“People feel a responsibility to what they’ve witnessed,” Eskandar said.

Eskandar said Egyptians must use this memory to move forward and use it as a resource against those trying to rewrite the narrative of not only the Egyptian public, but also activists everywhere.

“Today, there are pockets of resistance through memory,” Eskandar said. “It gives us the opportunity to be keepers of the flame.”

Dalia Abd El Hameed, Head of the Gender Program at the Egyptian Initiative for Personal Rights, said she believes the sentiments of the revolution encourage solidarity.

“[The narrative is about] confronting the silence together,” Hameed said.