With Super Bowl 50 right around the corner as two teams punched their tickets to the game this past Sunday, it’s safe to say the match between the Denver Broncos and Carolina Panthers will be one of the most coveted games in NFL history. An epic showdown featuring MVP winner Cam Newton and Canton, Ohio-bound legend Peyton Manning, this final face-off will be the first time ever two Heisman winners and No. 1 overall picks battle it out for the prized Lombardi Trophy.

While these franchise players will remain the center of attention until their February 7th bout, they are not the only ones making headline news. Most notably, this is an off the field feat that may be even more significant than anything Detroit Lions’ defensive end Ziggy Ansah has done on the field.

Ansah’s rise to the national spotlight is not only due to his efforts on the gridiron, but more importantly his outreach to a struggling city of Michigan.

For the town of Flint and the 26-year old pro-bowler, the No. 94 possesses more importance than just being two digits stitched on his jersey. In an effort to rescue the region from its lead-contaminated water crisis, Ansah assembled a crew of teammates with one goal in mind: giving back. The Former BYU Cougar donated 94,000 bottles of water to his local community as an act of relief.

A city where 40 percent of its inhabitants live in poverty, Flint has suffered the brute end of this water calamity following the city’s irrigation switch from Lake Huron in Detroit to the tainted Flint River. An ongoing epidemic since April of 2014, the citizens of Flint have voiced their frustrations to Governor Rich Snyder, yet limited progress has been made.

As a result, Ansah took matters in to his own hands.

The Ghana native opened up about his experiences living in the continent of Africa, empathizing with the citizens of Flint and their burdens of living under harmful irrigation conditions.

“Coming from Africa, I know exactly what it means to not have clean water or to not have water at all,” Ansah stated per the Free Press. “For me to be in a position where me and my [teammates] can help out these fans down here is a great honor to us.”

With help from the Lions organization, 1,680 cases of water were safely distributed to areas affected by the water crisis, exceeding Ansah’s original goal.

Among others who gave back was the defensive line of the Washington Redskins, contributing 3,600 Fiji water bottles in support of Ansah’s cause. Rapper and Detroit-native Big Sean also donated $10,000 in response to his #HEALFLINTKIDS campaign.

As various other professional athletes and celebrities continue to donate water in support of minimizing the Flint water crisis, each contribution is a reminder of the platform that sports, music, and individuals of other professions possess in being able to have a universal influence that extends beyond the title of their career. 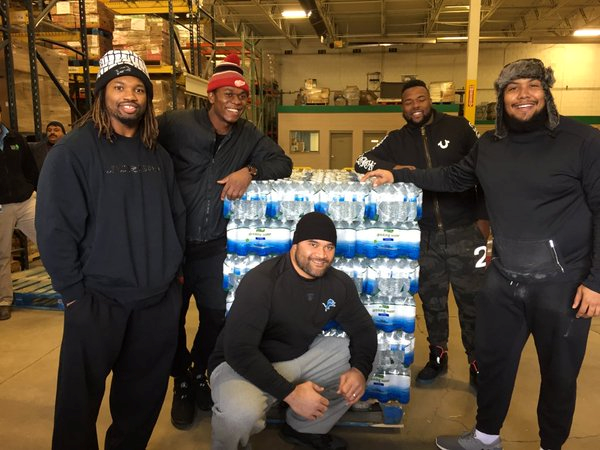 Great job getting their story out there, as it deserves to be heard. With all the commotion over the Super Bowl next week, this story got lost in the shuffle but it really is important. It’s a great topic to write about on my blog, athletes and activism, at https://matthewfergo.wordpress.com/ (you can email me at mrfergo@mix.wvu.edu if you would like to get in touch). These guys embody what a professional athlete should strive to be off the field. Ziggy Ansah spoke of how he knew what it was like to be in their situation. That’s something more athletes need to… Read more »