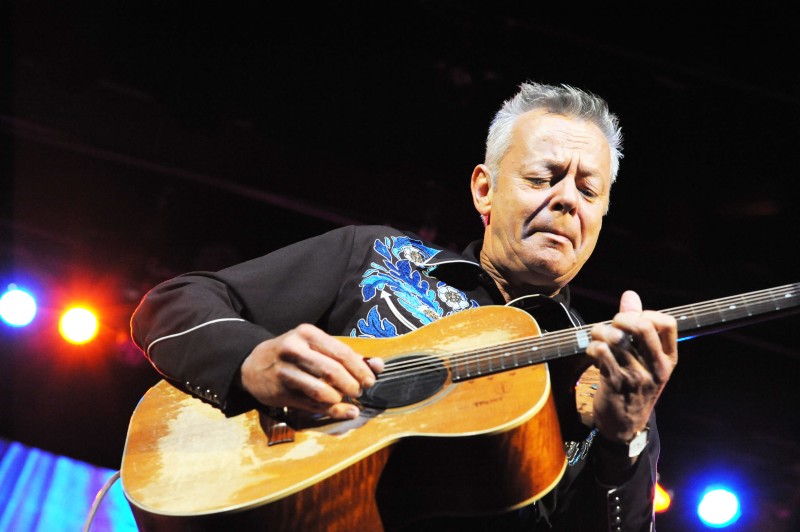 As I had predicted hours prior, hordes of elderly people flocked to and surrounded Campbell Hall the night Tommy Emmanuel stopped at UCSB’s campus. However, upon reaching the destination, I noticed married, middle-aged couples hand-in-hand, aspiring young guitarists, a mix of men in jeans and leather jackets (probably reliving the days they played guitar in their parents’ garage) but also men in proper suits and ties. It then hit me the range of audience Emmanuel’s music spoke to. Of course, using the word “spoke” is for lack of better word, as most of his songs are instrumental. Was it going to bother me? Admittedly, a bit. But did it actually really after I left the show? Not at all.

I rushed to my seat even though the show wasn’t starting for another 15 minutes. People near me chatted about the real talent Emmanuel is. Overall, the vibe was light and optimistic; it almost seemed as if everybody knew everybody (somewhat like a Christmas dinner party, if you ask me).

As prompted, the show opened with a duo called wisherkeepers. “They have to be married,” was the first thought I had when they sung the first breath of their song — their chemistry was undeniable, after all — and they were. Nice, soothing folk melodies and ballads filled the room until about 8:50 p.m. The energy in the room was enticing and addicting as we all waited on the edge of our seats for Emmanuel.

The legendary Australian solo guitarist brought more than just good music (and that itself is an understatement). He brought the heat, he brought enjoyment and he brought absolute genius pieces to grace us with. Right from the get go, men were screaming his name as he entered the stage. It surprised me how much Emmanuel got the elderly hyped.

Watching Emmanuel perform was nearly otherworldly. The 60-year-old man was pulling smooth tricks on his guitar I didn’t even know could be done. His music generated a happy, “get up and dance” vibe amongst the crowd. However, he could also elicit a melancholic tone through his finger picking technique. All with no words! Although he did sing a few songs, it was the ones that didn’t need the lyrics that hit home the most. He could change the pace so quickly, sometimes you couldn’t even see where his hands were moving. It was all natural, good fun; the man clearly enjoyed showcasing his talent.

It was moving to hear the inspiration behind the songs he performed. In “Angelina” (his most notable song) he used his daughter as his muse, and another one, “Endless Road,” was inspired by the ups and downs in life. Even the movie “Bridge of Spies” influenced the virtuoso for his song “Eva Waits.” His songwriting was the genuine originality of relying on in-the-moment experiences, where he’d encounter something in life, and use it to create these pieces.

Seeing his finger picking style was a feat I anticipated above all, and I was not disappointed in the slightest. Emmanuel’s talent with the guitar is extraordinary—he simultaneous plucked with the fingernails on one hand while fingers danced across the strings with the other. The most impressive guitar stunt he pulled that night was managing to play the drums. No, there wasn’t an actual drum set on stage. That’s right, he did it with his guitar. The place livened up tenfold at this point. Simple head nodding and feet tapping throughout the show turned to full-on head banging. And let’s just remember the elderly demographic here.

Emmanuel was downright charming and cheerful on stage. Everyone loved him, maybe a bit too much — “Move here!” someone shouted to him, which was followed by laughs and giggles. What makes it even better is when you learn that his set list was entirely improvised.

He finished off with an encore of “Somewhere Over the Rainbow” — his own rendition, of course. It was sad to see him go — not just for me, but for everyone in the room.

When I spoke to a lovely older couple, Waneen and John Marks, after the show, they were bursting with life, even in the chilly night weather. “I can’t believe what he can make the guitar do,” Waneen said, her husband nodded in agreement. Although they’re only recent fans of Emmanuel, that doesn’t discredit how much they support him. They flew in from Washington State just to see him perform! First-year UCSB student Madison Parker was only there for her music class, but ended up enjoying the show a lot more than expected. “I’ve never seen anything like it before,” she commented on his finger picking style.

All in all, it was a memorable show and definitely, without a doubt, worth a Friday night.