The UCSB men’s and women’s swim teams traveled north this weekend to compete against both Pacific and UC Davis on each school’s home territory. Both teams faced Pacific and emerged victorious as the men won by a score of 166-96 and the women 157-96. Following the win, the women’s team fell just short to Davis in a 154-140 loss. 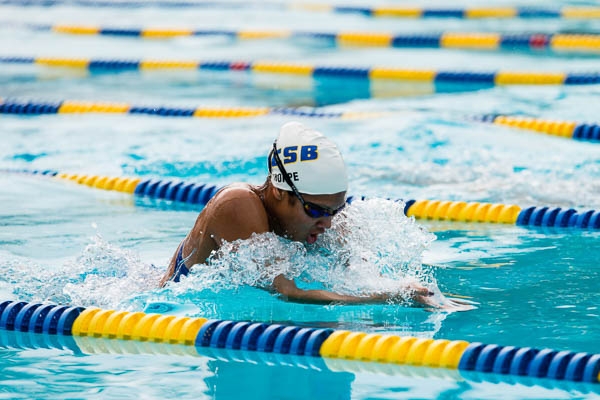 The women improved to 5-2 overall, taking just their second loss of the season while the men added their third-straight victory to improve to 3-2 on the year.

It was an encouraging for the women’s team as its first event of the day was against the Tigers from Pacific, in which it took both first and second in the 200-yard Medley Relay event to give UCSB 15 points to open the meet. The Gaucho ‘A’ team finished the race in a time of 1:43.27 and the ‘B’ team followed closely behind coming in second with a time of 1:46.09.

The Gauchos kept their momentum rolling as they headed into individual events and gave an overwhelming performance in the 200-yard freestyle event. Santa Barbara dominated the event, taking first through fourth place. Junior Meghan Bicomong led the way coming in first with a time of 1:53.76 and senior Hope Curran followed closely behind at 1:54.34. The Gauchos rounded off the top four with senior Hollace Barden coming in at 1:54.86 and sophomore Leanne Sun at 1:56.23. Santa Barbara added an additional 16 points to its total with this race alone.

UCSB’s men’s team nearly recreated the women’s performance as it too took first through fourth in its own 200-yard freestyle event. Junior Dylan Kubik led the pack with a time of 1:41.02, just out touching freshman Erik Vanbrocklin who came in at 1:41.03. Senior Eddie Sanchez and junior Clayton Young rounded out the other two spots coming in at 1:41.98 and 1:42.39, respectively.

The men saw another victory in the distance events as they took first and second in the 1000-yard freestyle. Junior Matt Drum took the top spot with a time of 9:41.92 and freshman Logan Hotchkiss took second at 9:43.87.

After downing Pacific on Friday afternoon, the women prepared to face the Aggies of UC Davis on Saturday. The Gauchos came up just 14 points short on the match. Despite taking an overall loss, Santa Barbara kept it close throughout and took home some event victories.

The Gauchos would again come up with a victory in the 200-yard Medley relay as the ‘A’ team touched the wall in a time of 1:42.83 to give the team a boost in points.

Santa Barbara took home a sprint event in the 50-yard freestlyle as Lauren Vosseler and Julia Mikota grabbed both first and second. Vosseler led with a quick time of 23.70 and Mikota followed very close behind at 23.90.

Senior Katie Records showed off her skills taking home two first place outings on the day in both the 200-yard freestyle and the 200-yard breaststroke events. She came in first at times of 1:53.43 and 2:18.58, respectively.

The Gauchos return home to face rival Cal Poly in both the men’s and women’s last dual meet of the season. The match is set to start at 11 a.m. on Saturday, Jan. 30 at Campus Pool.