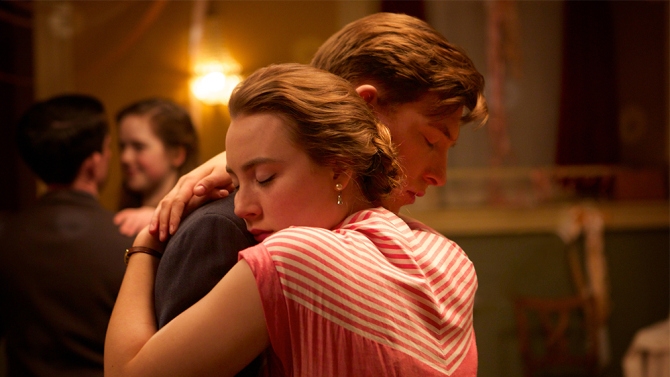 Where is home? “Brooklyn” chronicles a young woman’s journey that is both literal and introspective. After stepping out of Ellis Island’s customs checkpoint into a heavenly light, Saoirse Ronan’s Eilis Lacey must choose to commit herself to the possibilities of America or the familiarity of Ireland.

The movie, set around 1952, exudes a sense of wonderment and melancholy, which I think is appropriate for a story about a young woman finding herself in a strange, new place. After Eilis’s sister Rose arranges for her to live in the colorful scene of Brooklyn, New York, she travels to America aboard a boat that seems hospitable until the waves start a-churnin’ and so does her dinner. Lacey arrives in Brooklyn as one of the many dozens of Irish folk trying to make their way in the world, whereupon she inhabits a boarding house populated by giggly yet helpful women and their amusingly terse housekeeper. Although New York is a lively escape from the quietude of shamrock country, Eilis finds herself tearful as she receives letters from home, reminding her of the life she left behind.

After getting a job, she meets Tony Fiorello (Emory Cohen), an aspiring Italian plumber with whom she begins a relationship. After tragic events, she returns home and finds herself enamored with another gentleman caller played by Domhnall Gleeson, now hot off the success of Star Wars. Both of these characters represent their respective environments through their personalities, indirectly drawing Eilis to both sides of the pond.

Fiorello has attitude, ambition and exudes the possibilities of the hardworking American. He embodies a new, exciting life, but comes off as a little pushy, so it’s believable when Eilis considers his towering alternative. In contrast, Gleeson’s Jim Farrell is the more familiar option. He’s mannered yet charming, but reflects the life that Eilis was trying to get away from in the first place. Neither of them are perfect, but they are each believably enticing enough to give credence to Eilis’s hesitation. It’s a plot that’s pulled off far better than it ought to have been. Perhaps I’m just glad that there was no love triangle. I don’t care for those; it’s why “The Hunger Games” eventually lost me. Team I Don’t Give a Shit.

But I digress. Considering Brooklyn’s narrative, it’s important to be able to both sympathize with the main character and reflect her turmoil in her performance. Saoirse Ronan pulled it off. She goes through a wide array of emotions and sells them: homesickness, despair, love, hope, and confidence. The best performances are the ones during which you look at a screen and see a character, not an actor trying to be that character. This is, of course, one of them. Give the Academy a call if you don’t believe me. Unless, of course, you’re also disgruntled on account of all the white Oscar nominees. In which case, tell Ronan yourself when she comes for SBIFF.

Her emotional performance goes hand in hand with the film’s visual storytelling. The camera lingers on Ronan’s face for a prolonged moment as her character’s eyes dart around, showing us her confusion. We see a drawer of unopened letters sent from across the sea. The dim, wide beaches of Ireland stand out from the bright and crowded ones of Coney Island. With a “less is more” mindset, director John Crowley subtly puts us in Eilis’s thought process through such imagery, making the film that much more emotionally involving as we come witness to a woman’s growth as she has to answer the question, “where is home?” and an even harder question, “Am I happy?”

Alex Wehrung would like to say that nothing is more awesome than an Irish brogue.