The Daily Nexus
Sports
Sluggish First Half Drowns Gauchos At Home
January 21, 2016 at 5:10 am by Michael Jorgenson 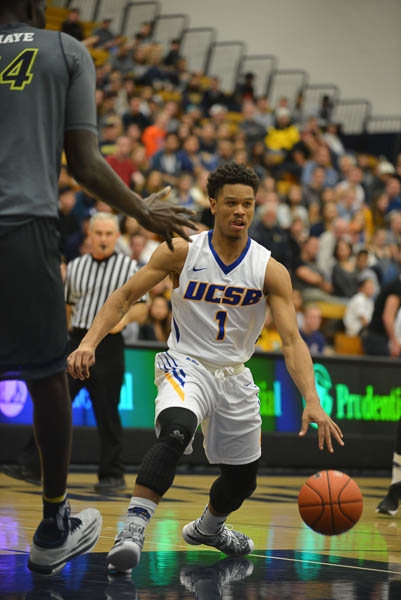 Entering conference play two weeks ago, the UCSB men’s basketball team’s confidence was the highest it had been all season. The Gauchos were kicking off the new year having won four straight games as they slowly clawed their way back to a .500 record.

After last night’s 77-67 loss to Long Beach State — the Gauchos’ second consecutive home defeat and third loss in their opening four Big West games — UCSB looks like a team in need of answers, as opposed to the cohesive unit it appeared to be less than three weeks ago.

“The problem defensively was we could just not put together stops,” Head Coach Bob Williams said. “The fact that we came out and were so lethargic that first half, it’s just too deep a hole when you can’t get stops.”

The Gauchos now stand at 7-10 overall and 1-4 in the Big West after falling to one of the conference’s top teams for the second time in the last five nights. The 49ers cemented their current third-place position in the conference at 9-11 overall, 3-2 Big West.

“It was a rough game for us. Quite frankly we just didn’t come ready to play,” senior guard Michael Bryson said. “It’s kind of frustrating. I don’t know how many times we have to take a loss for us to respond.”

In recent outings, UCSB has been at its worst late in the second half, especially in last Saturday’s 61-52 loss to UC Irvine when the it went scoreless for the final 10:50 at home. Last night’s game told a different story, as the 49ers got off to a quick 10-2 start out of the gate, including seven points from freshman forward Mason Riggins.

A three-pointer from senior guard Michael Bryson with 10:07 left cut the lead to 12-9, but Long Beach responded with a 19-7 run and never looked back. The 49er lead was 36-23 the halftime break and never reached higher than 15 for the game, but every time momentum looked to be swinging toward UCSB, the Beach had an answer.

“In the first half we came out a little slow, sluggish, lethargic, just not really energized and ready to play,” senior forward John Green said. “In the second half we were starting to click a little bit but it’s tough to get out of a hole when a team is making shots.”

Long Beach guard Justin Bibbins was there to kill the Gauchos’ runs all night, going 5-5 on three-pointers for a game-high 25 points.

“They hit open threes that we were giving them, they were attacking, really going at us, putting their shoulder down,” Bryson said. “They were the aggressor tonight and it shows. Once they took the lead they never gave it back.”

Senior guard Michael Bryson looked calm and collected on offense all night, scoring a UCSB-high 23 points. The conference’s leading scorer finished with an efficient 10-16 shooting night, including 3-6 on threes, before fouling out late in the game.

After trailing for nearly the entire game, a late comeback gave the Gauchos hope that they could salvage a win despite a lethargic first half performance. Five straight points from senior forward John Green cut the lead to 69-61 with 4:55 remaining. Just 92 seconds later, a left-handed lay-in by Bryson cut it to 71-65, bringing UCSB the closest it had been since the 8:12 mark of the first half.

From there, it was the 5’8” Bibbins who finished off Santa Barbara once and for all, scooping in a dagger layup with 2:11 remaining to give the 49ers a 10-point lead on their way to the 77-67 win.

“The second half I recognized that group, but you can’t play 20 or 30 minutes, you’ve got to play 40 minutes,” Williams said. “Long Beach played well offensively and Bibbins was sensational, but when you can’t get stops, it’s really difficult to crawl back in a game.”

Long Beach shot 50 percent for the night, taking advantage of poor UCSB defense by scoring relatively easy open shots off down screens and dribble penetration. The Gauchos shot 42.1 percent as a team for the game, but were a much different team in the second half, scoring 44 points compared to just 23 in the first.

UCSB was able to take some positives away from the loss. Its 17 free throw attempts were the most it has had in its last seven outings.

The night also saw the return of Green, who missed the Gauchos’ last six games with a knee injury. Clearly not at 100 percent as he played with a brace, Green provided the Gauchos some much needed energy and offensive punch, recording 12 points and seven rebounds off the bench.

This Saturday, UCSB will play the last of its current three-game homestand against Cal State Northridge.

A version of this article appeared on page 9 of January 21, 2016’s print edition of the Daily Nexus.