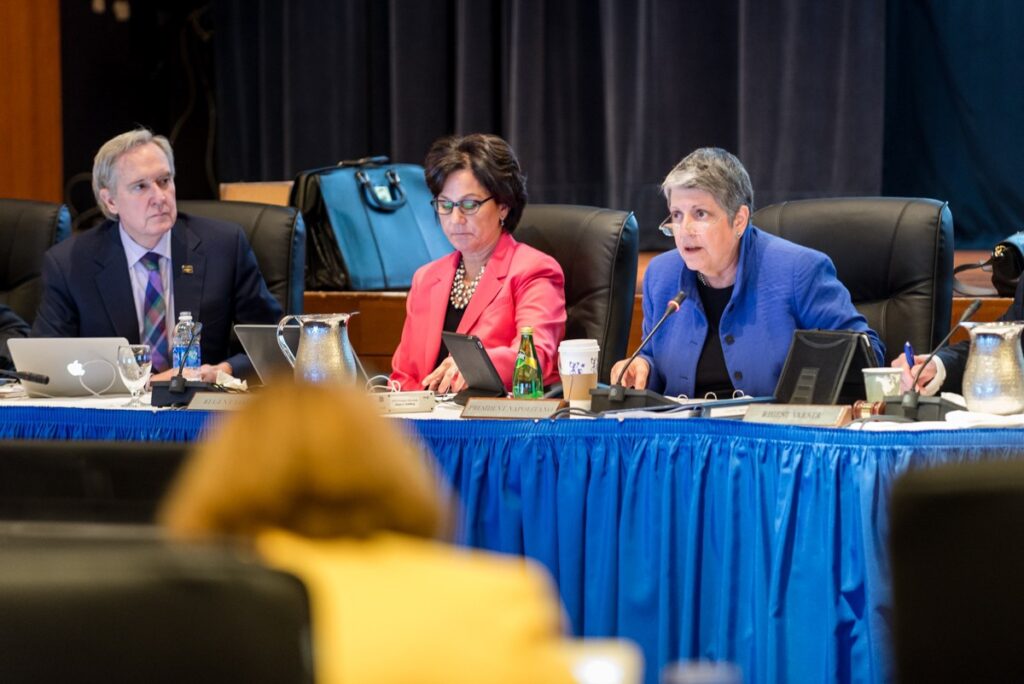 Although the increased number of applicants will help UC reach its goal of increased enrollment, some regents are unsure if it is enough. Nexus File Photo

Committee on Education Policy
The UC Board of Regents discussed 2015 figures for both freshman and transfer undergraduate applications, focusing specifically on the implications of this increase for the University’s goal of admitting 5,000 more California residents for the 2016-17 academic year.

UC undergraduate applications increased for the 12th consecutive year in 2015 by over 6.4 percent. Freshman applications from Chican@/Latin@ students rose 7.5 percent, applications from African-American students rose 5.1 percent and each campus saw some level of increase, with UC Merced seeing the highest level of growth. The total number of students that applied to UC in 2015 for fall 2016 start is approximately 260,000.

“The total number of freshman and transfer application that UC receives is the first step toward fulfilling the University’s goal of increased enrollment of California residents,” Dorr said. “Without sufficient demand on the part of the applicants who would be out ’16-17 transfers, the 5,000 goal would be impossible to meet.”

“Keep in mind that each of these 200,000 applicants apply to, on average, four campuses. That’s over 700,000 separate applications,” Sakaki said.

Regarding transfer applications, Stephen Handel, UC associate vice president for undergraduate admissions, said transfer students enrolled in UC come from a disproportionately low number of community colleges. According to Handel, UC broadened its range last year, but there is still a high concentration of enrollees from certain community colleges.

Regent John Pérez said he was skeptical about the relationship between overall application numbers and the potential for meeting the University’s goal of enrolling 5,000 more in-state students, especially because UC saw a net decrease in in-state enrollment despite net increase in overall applications and enrollments last year.

“An increase in applications in and of itself does not speak to my concern on how we get the 5,000 growth in in-state students without digging down and looking at the pattern of what portion of the in-state applicants were first, UC-eligible, discounting the number appropriately and then figuring out what the base of UC-eligible was at each campus to see what to outside possibility of growth was,” Perez said.

Regent Bonnie Reiss expressed concern over the “minimal progress” UC has made in enrolling minority students, despite overall growth in enrollment.

“We passionately believe that there are many underrepresented minorities that could do well at UC if admitted,” Reiss said.

Regent Fred Ruiz said although UC campuses might be “bursting at the seams” following increased enrollment, the University should continue to seek ways to accommodate more students while maintaining overall quality.

“This is going to create some problems for the faculty, it’s going to create some problems for the students, it’s going to stress our facilities,” Ruiz said. “But I look at this challenge as more of a … beginning of a great opportunity, because we have a huge issue out there that we have not really addressed, and that is: How do we serve the number of high school students and transfer students that, in the very near future, are going to be looking for a higher education?”

Regent George Kieffer said UC should consider changing the percentage of students UC admits on a “policy-basis,” which would demand an increase in funding, rather than on an unofficial basis, which further distributes existing funds.

“To say we’re going to increase growth without a recognition of a policy change makes it so much easier to underfund that growth, and I think that’s what’s happening, and I think it is bad policy to sort of dribble this forward without recognizing what we’re doing,” Kieffer said. “I think it would be naïve to think this is not something students are not recognizing themselves and therefore choosing to go to other institutions.”

Approval of PDSTs for Six Programs
The Board of Regents voted to approve two requests for increases in Professional Degree Supplemental Tuition (PDST), effective for the 2016-17 academic year.

PDST is currently charged to students in 64 graduate professional degree programs across UC. Revenue from PDST stays within the professional program and is on top of non-resident supplemental tuition. Both items meet the Regents’ financial aid requirements by supplementing financial aid resources by an amount equivalent to one third of new PDST revenue. The UC Office of the president recommended approval of both items.

“In the approval for nursing, there must also be an approval of the exception to policy,” Dorr said.

Student Regent Avi Oved said he would vote against the proposed increase in PDST for nursing programs.

“I won’t be able to support this item, because I’m voting my conscience on this one,” Oved said. “I think last year we increased tuition for nursing programs by 20 percent, and I think that made sense because there were multiple years when we didn’t increase tuition.”

However, Dorr said the increased PDST would bring funding for the four campuses closer to what other graduate professional nursing programs receive.

“The reason that it is still over five percent this year is that, because of this history, they wound up with a very large gap that’s different from most of the other programs,” Dorr said.

Regent Charlene Zettel said although she does not vote on the Committee on Finance, she is not in support of the increase.

“These are graduates that are doing the public good. These graduates help patients not only in our hospitals across UC but at hospitals around California,” Zettel said. “They are not compensated at the wages or salaries that are commensurate with the skills and importance. I wish there was some alternate way that we could minimize this increase.”

Board Chair Monica Lozano said although she supports this year’s proposed increase, she is concerned the four nursing programs will continue to request higher PDSTs.

“The action that we’re taking today, while I support it because I understand the need to be able to bring us up to market level, this actually puts us at a variance with the comparator group we identified in our policy,” Lozano said. “If, going forward, they come back to us with regular increases, that variance will continue to grow.”

A version of this story appeared on page 3 of the Thursday, January 21, 2016 print edition of the Daily Nexus.