The Daily Nexus
Music
Monterey Jazz Brings Campbell to Life
January 21, 2016 at 5:00 am by Allie Graydon 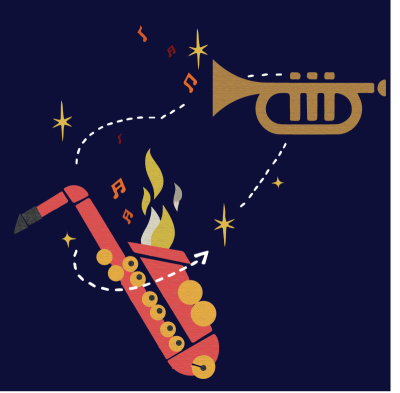 The air was still and brimming with excited anticipation in Campbell Hall on Thursday night. A group of five men stood onstage with their silent instruments, illuminated by an outline of red light. Quietness and darkness permeated the theater. Then all at once the silence was shattered by a burst of vibrant music as the ensemble began to play, kicking off a night of jazz, fun and incredible talent.

The versatile performers were welcomed by UCSB Arts and Lectures as members of the Monterey Jazz Festival on tour. The festival itself has showcased renowned jazz musicians since 1958 and the tour continues to share the magic of jazz music and the talent of the ensemble members. At their Thursday performance, they delighted the audience with a variety of musical styles and moods, all instruments blending effortlessly together while still remaining distinct.

Gerald Clayton tied the ensemble together as the musical director and with his stunning and stylized piano. His steady, pounding chords provided a backbone for every song and solo, adding an extra punch to the rhythm. The centerpiece of his performance, however, was his masterfully fast finger work during his solos. His hands jumped from key to key with incredible dexterity, reaching the highest and lowest notes within seconds. His entire body moved with him across the piano as he played, creating sweeping and gliding sounds as he moved up or down the notes.

No jazz ensemble is complete without a captivating rhythm, and the MJF tour had Joe Sanders on bass and Gregory Hutchinson on drums to thank for that. Sanders shone during the opening and closing numbers with his fast plucking and rapid note changes. He plucked strings with ease, almost embracing his upright bass as it moved with him to the beat. Hutchinson’s pounding kick drum gave intense energy to every number, with plenty of the symbol flourishes characteristic of jazz music. Together, their collective beat created a full, rich sound that resonated deep within the chest and throughout the theater.

Nicholas Peyton’s trumpet took center stage with its bright sound and spontaneous note changes. During “’Round Midnight,” Peyton began with low, whispery tones, creating a quiet atmosphere of mystery. Without warning, a long, high blow from the trumpet pierced through the mellow stillness, the clear tone filling the theater in dramatic contrast to the other, quieter instruments. Peyton enthralled the audience with his incredible, long, drawn-out notes that built to thrilling crescendos and his rapid riffs that added a fun personality to each number.

Ravi Coltrane’s alluringly smooth saxophone provides a perfect compliment and contrast to Peyton’s trumpet. Coltrane’s solos began with long, lingering notes, allowing the sound of the instrument to grow and create a mellow atmosphere. He followed long notes with short bursts of sound and unexpected combinations of low and high tones to create a jazzy, improvised sound. During the second number, his harmony with Peyton’s trumpet was clear and smooth, giving the number a relaxed feel.

With a rich, smooth voice and lightning fast guitar playing, Raul Midón had the audience roaring with applause after every number. During his solo songs, his ability to sing while playing the guitar and the bongos at the same time gave the illusion that there were three performers onstage rather than just one. At the beginning of “Sunshine, I Can Fly,” his vocals perfectly mimicked the sound of a trumpet while harmonizing effortlessly with his rapid guitar picking. The various elements of his performance worked together, his voice rising with his guitar and his lyrics settling into the rhythm he was creating on his own.

The Monterey Jazz Festival tour was a showcase of classic jazz styles and dedicated performers. Each member of the ensemble added a key element of sound to the overall atmosphere of each song. In their solos, however, they each demonstrated a unique improvisational style and various techniques to change the mood from mellow to thrilling. Jazz is a music that focuses on the coming together of individual talent in organized chaos, and nowhere was that melding of music so perfectly arranged than the MJF tour.

Thanks for the great review. Just a note – it’s Nicholas Payton, not Peyton.