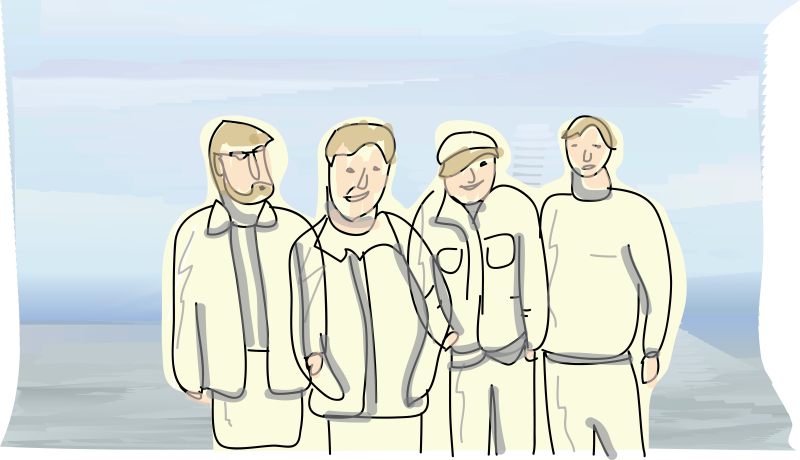 My first time attempting to find downtown Santa Barbara’s SOhO music club proved to be more difficult than I thought it would. As I wandered down State Street in the frigid, 45-degree weather, I thought, “This show better be worth it.” A group of weed-smoking transients finally put me in the right direction, which was something Google Maps was clearly incapable of doing.

The short line forming outside the venue was in good spirits. It was mostly comprised of 20-something hipsters in jean jackets and black boots, standing with their fists in their pockets. The sound from Surfer Blood’s sound check seeped out from the front doors, intermingling with laughter and small talk. I spotted Carson Capps, a second-year English major at UCSB, growing more excited with each passing minute. “It’s hard to catch them because they’re from Florida, so they don’t come through often,” Capps said. As the doors opened, and my underage hands were marked with a Sharpie, I made my way toward the stage. It was instantly clear that the room wasn’t full, so securing my front-row spot wasn’t difficult.

Opening act Cayucas took the stage about an hour later, their arrival marked by sixties-era mariachi music. A few songs into their set, the lead singer introduced himself, and fondly mentioned his days on the iconic party street Del Playa Dr. in Isla Vista. This garnered shouts, laughs and smiles around the room. The Los Angeles natives’ brand of surf rock is centered around soft synths, smooth vocals and rocking bass lines. The band effortlessly floated through their set, with tiny green lights shining down on everything in sight like bioluminescent algae.

As Surfer Blood took the stage shortly after, the calm in the room was finally shaken up. Lead singer JP Pitts launched right into the set, quickly introducing the band and counting off the first song. From the very start, a strong connection between the four-piece was evident as they made continuous eye contact and moved around the stage to be closer to one another. The crowd finally got moving during power-pop jam “Miranda,” an early track from the band’s discography. The marriage of punk fuzz and beach-y guitar riffs translated well live, creating a nice dynamic between soft and loud. Toward the middle of the set, most pint glasses were empty and everyone was nice and loose. Then, things got exciting.

Pitts announced that they were about to play his favorite song, “Take it Easy,” and immediately asked for some Red Bull from a guy in the crowd. He downed the sugary drink, took his microphone off of the stand and rolled underneath the barrier separating the stage from the floor. He went into the crowd, where a semi-circle formed around him. The band turned the breezy track into a seven-minute jam, with guitar distortion and pedals in full effect. After making his return back to the stage, he noticed me standing in front and center, scribbling notes furiously.

“Hey, what are you writing about?”

“Yeah sure, after the show!”

As the people around me peeked over my shoulder to see my notebook, I smiled and nodded at the band to reassure them that I was writing nice things.

“I Can’t Explain,” an understated single from their latest album 1000 Palms, closed the show out. It devolved into echoes of raw feedback as each member put down their respective instrument and left the stage. Predictably, they didn’t leave the audience hanging, and came back for an encore of one more song. But, there was one last surprise. Surfer Blood invited the members of Cayucas back to play a game of their own invention called “cover roulette.” There was a little shifting around, then the first chords of Tom Petty’s “Free Falling” rang out. In the sweetest moment of the night, the whole crowd swayed along and sang the classic rock staple out of key.

As I walked out of SOhO and back into the cold, I was still smiling, and feeling much warmer than I had before. My earlier wish was granted: the show was absolutely worth it.