The Daily Nexus
Music
Brazilian Girls To Come to SOhO
January 15, 2016 at 4:13 pm by Alec Hartnett 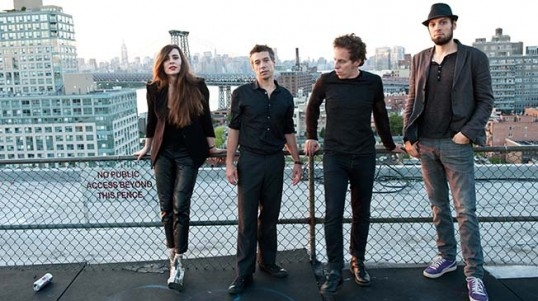 Hailing from a city across the country from Isla Vista, the band Brazilian Girls will be swinging downtown Santa Barbara this Saturday, Jan. 16. Interestingly enough, the band members have no roots based in Brazil, and the only “girl” is the Roman Italian, Sabina Sciubba, whose entrancing voice carries listeners through many different cultures. Keyboardist Didi Gutman originates from Buenos Aires while drummer Aaron Johnston and guitarist Jesse Murphy bite right off The Big Apple.

The band was formed in New York City. The group grew out of a not-so-unknown club called Nublu, which was started by Turkish saxophonist, Ilhan Ersahin. When asked about the excitement being brewed by his club in Alphabet City, Ersahin might respond, “We’re simply playing music.” Intimating to be within the same vein of mentality, one can see how The Brazilian Girls’ provocative style acclimated from this atmosphere.

Similar to the variety of languages Sciubba serenades her audience with, Brazilian Girls’ genre cannot be tacked down to one. Their music is a mix of electronic (both upbeat and relaxing), jazz, bossa nova, reggae, tango as well as other musical Latin influences. Their musical prowess is so diverse it is nigh impossible to exactly describe their style exactly.

In early live videos, seemingly shot in tiny, overheated basements, the Girls sound like an Indie-rock band group for half a set and a Latino electronica DJ set the next. Not only do their instruments manage to sound like different parts of the musical world, Sciubba’s voice transcends regularity and singularity by throwing English together with French, Spanish and Italian. There is probably some other language tossed in as well, still unnoticed; it would not be surprising.

Arguably their largest hit, “Pussy,” brought the band high into the limelight, although being short-lived. Not to say the Girls have fallen off the map, but they have not quite maintained their priority in the charts. Perhaps this lack of corporate attention left their musical integrity untainted, composing the consistent whirlpool of melodies and harmonies so characteristic of The Brazilian Girls?

The conglomeration of these tastes, sounds, vibes, feelings, music and cultures very much resembles the identity of New York City, mirroring the lifestyles of those who live there. Among a Nicolas Jaar type of electro-atmosphere, one can hear the garage-y textures of a Brooklyn Indie band. Ostensibly entirely wrong for one another, these miscellaneous genres are welded by The Brazilian Girls in such a way as to be an almost perfect, musical representation of New York City. Clashing cultures and sounds managing to lay down their counteractive differences in order to coexist.

And now Santa Barbara will be introduced to this beautiful cacophony of smooth, rough, rocking Latino, electronic swing. The laid-back wealthier residents will have to stand up for this show. Will the Girls reset and influence the sometimes too usual Santa Barbara music scene?