The Daily Nexus
Outside Opinions
Living Wages Left Out of Library Renovations
January 13, 2016 at 6:00 am by Laurence Young

With the recent completion of the Library Addition and Renovation project, it seems like a good moment to reflect on those areas still in need of attention. While the $76 million project has addressed some major needs of the campus and the library itself, there are still critical problems facing the staff who work in the building every day.

A recent study by the non-partisan Economic Policy Institute found that 98.6 percent of UCSB clerical support staff do not make enough to support themselves and a child on their salary in the Santa Barbara area. The situation in the library is even worse. The library assistants who directly serve the campus community are hurt twice—first, by being forced to stay in an outdated job classification that does not reflect the high level of their professional library work, and then again as UCSB salaries are among the lowest of all UC campuses.

In 2014 the library employed 82 library assistants who made, on average, $34,596.63. To put that in perspective, the median family income for Santa Barbara is $75,400. The EPI study calculated that you need $59,268 to meet your basic needs, and none of the library assistants received that kind of salary. Worse yet, 61 of these staff members meet the U.S. Department of Housing and Urban Development’s definition of low income. 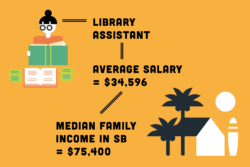 Obviously, this discrepancy in pay has a deleterious effect on the staff. Despite the fact that I have earned two master’s degrees from UCSB and that I am expected to resolve complex, research-related queries, during the first three years I worked in the library I was forced to rely on my retired mother for help each month with groceries. As I near 40 years old, it is deeply humiliating to be unable to support myself on the wages I earn.
I am humiliated to be in such a penurious state, but I am grateful that I have the family support structure to help me stay afloat. The stories I hear from my fellow co-workers who are in situations much worse than mine are humbling. One woman has her ex-husband and her grown children helping her meet her rent each month. Another colleague is in a situation like mine, receiving help from her retired parents, but had the added horror of needing to go on disability due to surgery. And of course there is the army of UCSB employees who live nowhere near Santa Barbara and commute more than an hour each way in order to make ends meet on their salary.

These stories are legion amongst the library staff at UCSB, but they don’t describe what we do every day in service to the campus community. We are the public face of the library, helping you, our patrons, with everything from checking out materials and managing course reserves to opening the library every day and assuring that the information resources that our campus needs are accessible. We process new materials as they arrive and have the critical job of making sure that you can find them in the library catalog and on the shelves. We provide research and reference help throughout the various collections and we facilitate the complicated transfer of research materials from our off-campus annexes and other libraries around the world. We are the vital link between the collection, the librarians and you. We are a diverse and largely female workforce and we deserve a wage that we can live on independently.

The University of California is the third largest employer in the state and the largest in Santa Barbara. With the recent increases in funding from state coffers and the resources to undertake major building projects like the Library Addition and Renovation, UCSB should be a force for economic growth, not a catalyst for the continuing evaporation of the middle class.

Laurence Young has lived in Santa Barbara for 10 years and has earned two masters degrees from the UCSB Music Department. He has been employed as a full-time library assistant since 2012 and he is the UCSB Chapter Coordinator for the clerical workers union, Teamsters Local 2010.

Interesting. UCSC doesn’t use the Library Assistant 2 salary level (lowest level is Library Assistant 3), but has fewer than half as many library assistants (based on data at https://ucannualwage.ucop.edu/wage/).

Perhaps UCSB is over-staffed? More likely UCSC is under-staffed, as the number of librarians and library assistants is less than when UCSC was a third the size.

Mr. Young has no one but himself to blame for his lot in life. No one told him to get two masters degrees in music and then work in a public university library. If he is unsatisfied with his lot in life he is free to seek other employment elsewhere. Someone who is nearing 40, is earning around $35k in Santa Barbara, and relies on his mother for food should feel ashamed. The way out of that is to find a better job for himself. Supply and demand dictates salaries, not sob stories. Being a Library Assistant (and yes, that’s… Read more »

I think you have missed the point and I must commend Mr. Young for standing up and speaking out for Non-academic staff personnel. Look deeper Mr. Hill…please… maybe then you would see that this is not a sob story but a wrong that should be righted. I take what you said about being fairly compensated as a personal insult as should other clericals within the UC system and particularly in the UCSB library.

This is such a great article. The struggles we all face as career staff stretch all across the UCSB campus. We remain highly devoted to our jobs, and the community we service. We keep the campus running smoothly yet we struggle with low wages in a very expensive city.

I agree with Hank Hill completely. Get two worthless degrees, then take a job as a librarian… putting books on shelves. If you don’t like your job (or the pay), you are free to find work elsewhere. What about other people who work around SB and make minimum wage or maybe slightly higher? Should they make minimum wage in SB $28 per hour to equal $60K per year when working 40 hours per week? Dude – you got two worthless degrees and as a result, could only find a job in the library. Now you’re pissed because you are paid… Read more »

Mr. Herb, librarians do much more than that, I assure you. You should try stepping inside a library sometime. It’s quite rewarding!

If the compensation doesn’t please you then find a better job.

Mcdonalds employees don’t earn 75k either. Unfortunately, Mr Lawrence works at an academic library where his degrees don’t really matter. They wouldn’t matter in any academic library. If he had a MLIS that might give him more flexibility in getting higher paying library positions. That’s how academic libraries work. You have to have a library science degree. He doesn’t and most library assistants at UCSB do not.

While I totally agree that full-time work, especially at a public university, should earn you your living, I’m not compelled by this article. The median family income is vastly different than median individual salaries, which according to MIT’s Living Wage calculator, hovers around 30-40k in SB depending on profession (per capita is 36k). It muddles your argument to ignore this distinction! Also, I am curious to know how the situation of other library assistants compares to your own – if these positions are mostly part-time, not requiring a library degree or expertise, or staffed by students who (for the most… Read more »

We ALL face the high cost of living in this beautiful area. There is only so much a Library Assistant deserves to be compensated. Is the salary low? Yes, compared to other professions…so maybe pursue another profession?

Family and individual income are very different and should not be used interchangeably.

Employee life choices are not the employer’s responsibility.

The Library Assistant pay averages, according to this article, a little over $34k which is a bit above $16 per hour. What is the issue here? It’s an Assistant position.

This is akin to someone buying a house next to an airport and then complaining about the noise of the planes.

You are a Library Assistant and you expect to be paid $25 an hour!!! Please be realistic. Even entry level Librarians do not start at 65k per year! Why not get a MLIS and be a Librarian if you want to earn more. Two masters in Music, that’s why you’re stuck as an assistant. Enough with the whining already and get real!

The reality is that the pay for most lower level administrative positions at UCSB doesn’t come close to meeting the cost of living for the area. That’s true for most areas of the state. Another example is the Bay Area, where even Caltrans upper level supervisors and management can’t afford to live anywhere within a hour commute time of work. Single incomes don’t cut it in most of the state these days (and haven’t for years).

Amused Not
Reply to  Amused Not

I had an opportunity to return to Santa Barbara in the early 1980s to work at UCSB doing something I loved doing. Even then the pay scale made it impossible to live any closer than Santa Maria or the Five Cities. A possible solution would be either a pay differential adjusted to the cost of housing or UC provided staff housing like what Cal Poly is now doing.

It seems to me you are blaming UCSB for the choices you made. Don’t tell me you didn’t know what was waiting for you, career wise when you chose to study music! Go be a musician then!