The Daily Nexus
Swim and Dive
UCSB Cruises Past Rebels at Campus Pool
January 12, 2016 at 9:54 am by Daniel Moebus-Bowles

This past Saturday, the UCSB men’s and women’s swim teams reopened their dual meet season welcoming former rival UNLV to Campus Pool for the first meet of 2016. Despite swimming against the rain, the meet carried on and both Gaucho teams emerged successful. The men took a 153-109 victory over the rebels and the women added an even more convincing win, defeating the visitors 168-93. 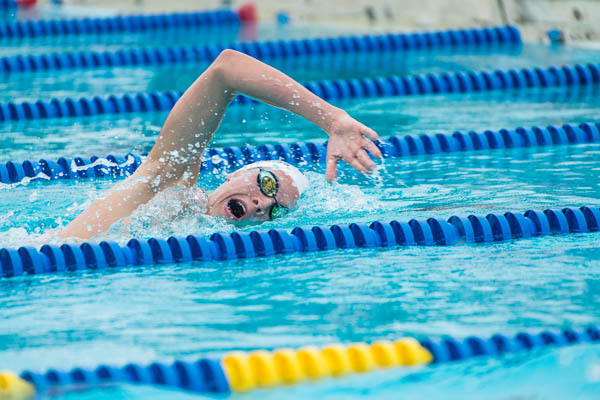 With this competition in the books, the women’s team adds a fourth win to its record with just one loss on the season to a tough UCLA team in early October. The men add a second win on the year and have now won two-straight.

“Coming into this meet, our team was coming off of a long training camp, so I think our team did really great with the confidence and preparation that we’ve gained,” junior sprinter Cheyenne Low said. “We’ve had a long standing rivalry with UNLV so I’m proud of our team for performing so well.”

This meet was completely dominated by the Gauchos on both ends of the spectrum as Santa Barbara took home 24 wins in the 32 events that were held.

The first event of the day was awarded to the Gauchos as the women’s team found itself placing in first and third in the 200-yard Medley Relay. The Gaucho’s  ‘A’ team, consisting of Low, freshman Rachel Kulik, and seniors Charis Hoppe and Lauren Vosseler came in at a time of 1:43.83 to take the title. Santa Barbara’s ‘B’ team nearly beat out UNLV for second place, coming in at 1:46.67.

The men’s team made a huge mark in the distance swims as it swept the podium in the 1650-yard freestyle event. Junior distance swimmer Andy Lau led the Gauchos with his first place time of 16:14.9, which was nearly a full 30 seconds faster than the first Rebel to cross the line for UNLV. Freshman Logan Hotchkiss and sophomore Matt Drum rounded out the top three coming in at 16:15.91 and 16:36.15, respectively.

Senior butterfly swimmer Madison Tedesco had a day full of individual success as the veteran went for two victories in butterfly events. Tedesco took home both the 100-yard and 200-yard fly, coming in at times of 58.35 and 2:06.99, respectively. Her victories helped push the Gauchos to their outstanding point total of 168.

“I think these performances from our team helps boost morale and confidence which are definitely key if we want to win conference,” Low explained. “I gain confidence knowing that my team will back me no matter what the outcome is, and that allows me to relax, focus, and have fun.”

The Gauchos have three dual meets remaining, but the MPSF Championships are nearly just a month away in mid-February. Santa Barbara’s next meet will be January 22nd, when the team welcomes the University of Pacific to Campus Pool at 2:00 p.m.