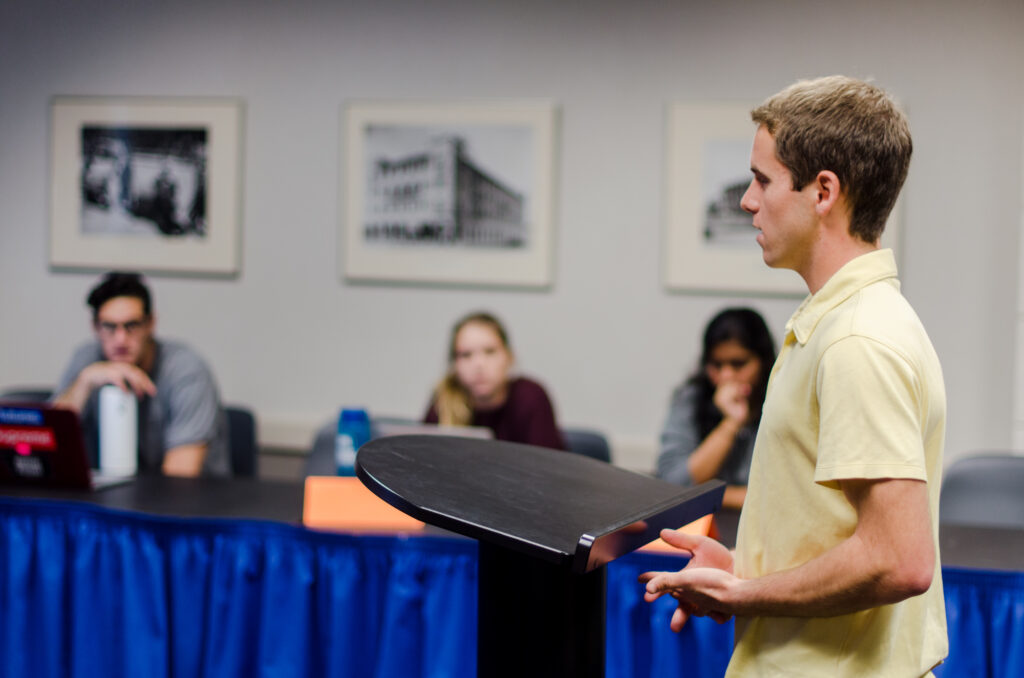 Marcus Vicari, second-year biopsychology major, presented the Isla Vista Surfrider’s request of $5,000 for its Concert at the Coast, an event to educate attendees on ocean life and increase community involvement in the Surfrider program. A.S. F&B voted to fully fund the request.

“Our cause is to protect our ocean waves and beaches here,” Vicari said.  “At the concert, we always have a raffle, and the proceeds of the raffle are going to go to Environmental Defense Center.”

The Armenian Student Association presented their request of $2,490 for the All ASA Games, an annual basketball and soccer tournament. The event will host UCSB students as well as students from other schools. A.S. F&B voted to fully fund the request.

Jacob Andrew, second-year biology major, requested and received $462 for the Health Professionals Association’s Path to Professional School, which will provide insight on careers in the medical field and life after graduate school.

“We’ll be hosting workshops about affording graduate school and maintaining a balance between rigorous academic work and kick-starting a career in a competitive field, while also maintaining a social life and possibly starting a family,” Andrew said.

“It’s important for [API Students] to go learn about different issues that are facing the API community, including queer issues, immigration labor, Islamophobia and how the API community can get involved in the Black Lives Matter movement,” an APIPA representative said.

Chican@ Graduation requested $20,000 for their annual graduation ceremony. The graduation, which is the largest alternative graduation at UCSB, breaks down language and culture barriers for Chican@ families. A.S. F&B voted to partially fund $16,500 for the ceremony.

Mock Trial requested $1,520.52 for three pre-law tournaments in the coming weeks. A.S. F&B voted to partially fund $507 of the total request, with a stipulation that the funds be used for the team’s trip to UCLA.

“We’re more than just a pre-law program,” a representative of Mock Trial said. “We’re highly competitive. And we really, really need help [in funding the trips].”

The Campus Democrats requested $1,060 for a trip to the California Democratic Convention, which the group has annually attended for the past 10 years. A.S F&B voted to partially fund $860 for the convention.

“Anyone is welcome to come,” Jorge Escobar, a fourth-year political science major and president of Campus Democrats said. “We expect a lot of people to go because it’s a presidential election year.”

Kapatirang Pilipino requested $1,500 in funding for their annual trip for the Anakbayan conference. The event discusses social justice issues affecting the Filipino community. A.S. F&B voted to partially fund $1,000 for the conference.

“The conference brings all of Anakbayans together and we discuss topics in the Pilipino community with regards to immigration, undocumented status and solidarity building with other minority groups,” a Kapatirang Pilipino representative said.

La Mujer requested $12,701.74 for a conference on Latina empowerment. The group will bring local high school Latina girls to the conference and encourage them to seek higher education. A.S. F&B voted to table the request for one week.

“We do workshops on body positivity, we provide lunch and breakfast for the girls,” a La Mujer representative said. “The main focus is to show how accessible going to college can be and giving [the girls] support for being women of color.”