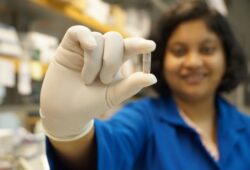 Amrita Banerjee holds up a prototype of the insulin pill containing intestinal patches.

Since the development of diabetes treatment, injections have been the only method of insulin delivery available to patients. However, diabetes patients may soon be able to replace their insulin pricks with a pill that Samir Mitragotri, Associate Professor in UCSB’s College of Engineering, and his team are developing. The researchers have made a huge breakthrough in insulin administration that eliminates the use of needles — a breakthrough that has also excited scientists about its potential in other fields of medicine.

“Shots are a brute force way of delivering medicine into the body. If you had a choice between taking a pill and taking a shot, which would you prefer?” Mitragotri said. “People don’t like shots because they hurt. They cause a lot of needle phobia. Because of that, [patients] tend to miss their injection dose, and that’s a problem because if you miss a dose of insulin, it can cause a lot of long term side effects.”

Insulin is a hormone produced by the pancreas that regulates glucose levels in the blood. Diabetic patients need to manually inject insulin because their bodies do not properly use or make enough insulin — in the case of Type 2 diabetes — or their bodies no longer produce it at all — as in Type 1 diabetes. Mitragotri explained the technology behind the newer method of insulin delivery.

“It’s a technology that we call ‘intestinal patches’ … There’s a capsule, like the standard vitamin pill you take, and within that pill there are about half a dozen small patches,” Mitragotri said. “So you swallow it, and the coating stops it from degrading in the stomach. When the pill makes it to the intestine, the coating dissolves and the patches come out and stick to the wall of the intestine.”

“You can control the release of insulin into the body with the dissolution of the patches themselves. They are made of a material that is water soluble, and it dissolves over a period of time, and we can control the composition so it dissolves it over different periods of time,” Mitragotri said.

In addition to being patient-friendly, Mitragotri explained that the oral route more closely mimics the physiological route better than the injection. When taken orally, the insulin is delivered closer to the liver rather than in the bloodstream where insulin may not normally be. Despite these advantages, the new method still needs to undergo many tests before it is administered in a clinical setting. Mitragotri and his team are already looking into the next steps of this treatment.

“We would like to have as much control over the delivery rate as possible. And we would like to increase the amount of insulin that is absorbed into blood circulation,” Mitragotri said.

Though in its working stages, the delivery method of the little pill carries high hopes.

“I think this will significantly impact the way people take insulin. Because insulin is taken several times a day by diabetic patients, a method like this where you can just pop a pill would make a significant impact on their lifestyle,” Mitragotri said.

A version of this story appeared on p. 16 of the Thursday, Jan. 7 print edition of the Daily Nexus.