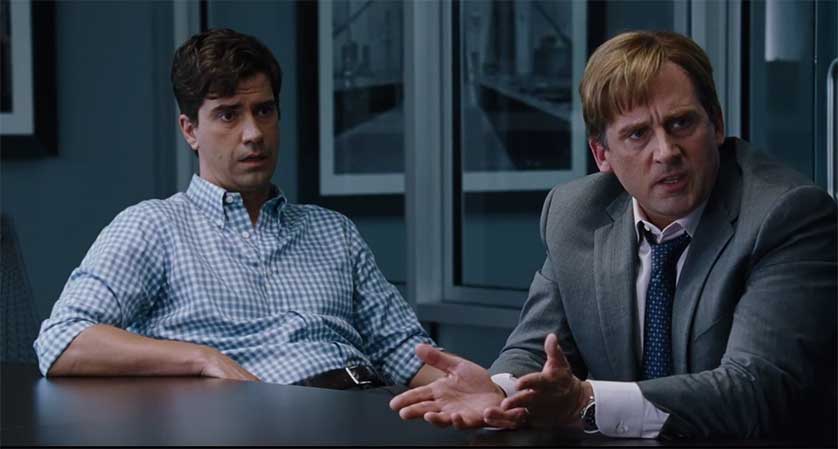 I’d be lying if I said I understood half of what the hell people were talking about in this film. Not since “Tinker Tailor Soldier Spy” have I been so befuddled. Listening to its financial jargon is like listening to Data explain to Riker how the hypersonic flux transducer can make Picard’s hair grow back (I give full permission to my fellow fan-fic writing nerds to use that idea). This is what happens when you trade your S.T.E.M. major for FAMST.

Suffice to say, “The Big Short” is complicated when it comes to the finer details. The broad picture is much more transparent, however: in a time span of two years, several people in the financial industry realize the existence of a housing bubble in the United States. Thus, they are able to predict the Great Recession years in advance and profit from the impending financial apocalypse. At the forefront of this is Dr. Michael Burry (Christian Bale), the awkward hedge-fund manager who makes the discovery, as well as Mark Baum (Steve Carell), the misanthropic trader whose personal interest in Wall Street’s moral degradation (as if it could get any lower) runs deep. Both actors lend powerhouse performances to their roles, each leading the film with certain emotional weight to their respective portrayals.

But all that’s only the broad picture, skimmed down. Like I said before, this movie is full of enough financial jargon to make you see dollar signs. Unless you have particular knowledge of what CDO or BB ratings are, you’ll have an easier time finding out why people still think the Kardashians are relevant than understanding the dialogue. The movie is, however, aware of the perplexing nature of the terminology and every so often humorously stops the action to have real-life celebrities explain what the fuck something like a subprime loan is (according to Margot Robbie, who is radiantly lounging in an immersive bubble bath whilst talking to the camera, just equate the word subprime with shit and you’re all set).

That brings me to the film’s greatest strength: its acidic wit. The characters frequently break the fourth wall and talk to the camera directly, either to add insight to the already crazy proceedings or to clarify a character’s intentions to humorous effect. For instance, Stanley Wong explains that his boss describes him as an Asian stereotype in order to use their clients’ racism to their advantage. Also, few are safe from the biting observations of both the characters and the film itself. Lines such as “Look at him. His face is going to burst. He looks like the bad guy from Dune,” said by Ryan Gosling’s Jared Vennett of the seething Mark Baum, are peppered throughout. Perhaps nothing sums up “The Big Short” more than this quote, apparently overheard at a bar in Washington, burned across the screen: “Truth is like poetry. And most people fucking hate poetry.”

When you couple sharp tongues with a cinéma vérité style of filmmaking, I start drawing comparisons to “Veep.” Like the HBO comedy, “The Big Short” is a personal work that thrusts you into the action and provides powerful satire. If the film has a message, it’s this: anyone on Wall Street involved in the bubble were irredeemable assholes. The main characters are indirectly assholes themselves for profiting from a failing economy. In the end, pockets are filled and souls razed. It almost turns the film into a tragedy — a morbid reminder of how many lives the Recession destroyed. “Every time unemployment goes up one percent,” Brad Pitt’s disgruntled Ben Rickert tells two eager up-and-coming investors, “40,000 people die.”

“The Big Short” shows us the 1 percent in all its smug glory and makes the shut-off and short-fused Baum seem like the most rational person in the entire world. Its humor brings us out of a world of shady dealings and financial insecurity and adds enough levity to allow us to look back on such a dark time of our lives. Or, if you want a more vulgar summation, it’s a funny movie about shitty people taking advantage of the arrogance of other shitty people in order to make a shitload of money. Fun time.