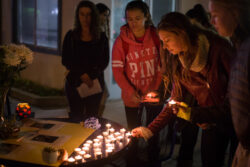 A small group of students gathered Tuesday at the Associated Students Pardall Center in Isla Vista to commemorate the lives of the three people killed by a gunman at a Planned Parenthood clinic in Colorado Springs on Friday.

Two UCSB groups, Planned Parenthood Generation Action and the Women’s Ensemble Theatre Troupe, hosted the vigil, which aimed to both honor the victims of the shooting and serve as an opportunity for students to discuss larger issues involving women’s reproductive health. Organizers constructed a display with pictures and short biographies of the three people who died in the shooting: Jennifer Markovsky, who was accompanying a friend at the clinic; Ke’Arre Stewart, an Army veteran who served in Iraq; and Garrett Swasey, a University of Colorado police officer who was called to the scene with dozens of other officers.

Co-organizer of the vigil and fourth-year psychology major Leilani Riahi commenced the event by asking attendees to take a few deep breaths as candles were lit and passed around the circle of about 20 students.

“As we gather tonight to support Planned Parenthood, we stand in solidarity with the entire staff … who may be feeling sorrow or vulnerability after this attack as they mourn the loss of their community members,” Riahi said.

Co-president of Planned Parenthood Generation Action and second-year feminist studies major Jill Pember, who helped organize the event, said she works at a Planned Parenthood office in downtown Santa Barbara and is fearful after the shooting in Colorado.

“This recent shooting makes me afraid to even do what I love doing, which is going to the office and working for Planned Parenthood, and I shouldn’t have to feel that way,” Pember said.

“This recent shooting makes me afraid to even do what I love doing, which is going to the office and working for Planned Parenthood, and I shouldn’t have to feel that way.” -Jill Pember

Pember said the vigil also honored the injured victims of the shooting.

“We are also here tonight to express our support for the five police officers and the four civilians who were injured at this shooting,” Pember said. “We wish them a speedy recovery, both physically and emotionally.”

Second-year feminist studies and political science double major Alicia Carducci, who helped organize the event, said she was troubled by the reaction she saw online after the shooting.

“As the weekend carried on, I became angrier because of the responses … and people who refuse to take it for what it is, which is an attack on women’s health care,” Carducci said.

“In the words of Cecile Richards, ‘To those who go to unimaginable extremes to close our doors, we deplore your violence. We reject your threats  … We aren’t going anywhere,’” Carducci said, adding that there are currently more than 700 health centers in the U.S. affiliated with Planned Parenthood.

Director of public policy and community engagement at Santa Barbara’s Planned Parenthood Gina Fischer, who is also a UCSB alumna, thanked the crowd for attending the event and said everyone in the Planned Parenthood organization was impacted by the shooting.

“Our number one priority is our patient and employee safety, and we’re grieving these attacks,” Fischer said.