The Daily Nexus
Spoken Word and Poetry
Dope Metaphors in the Hub
November 27, 2015 at 5:00 am by Vicky Munro 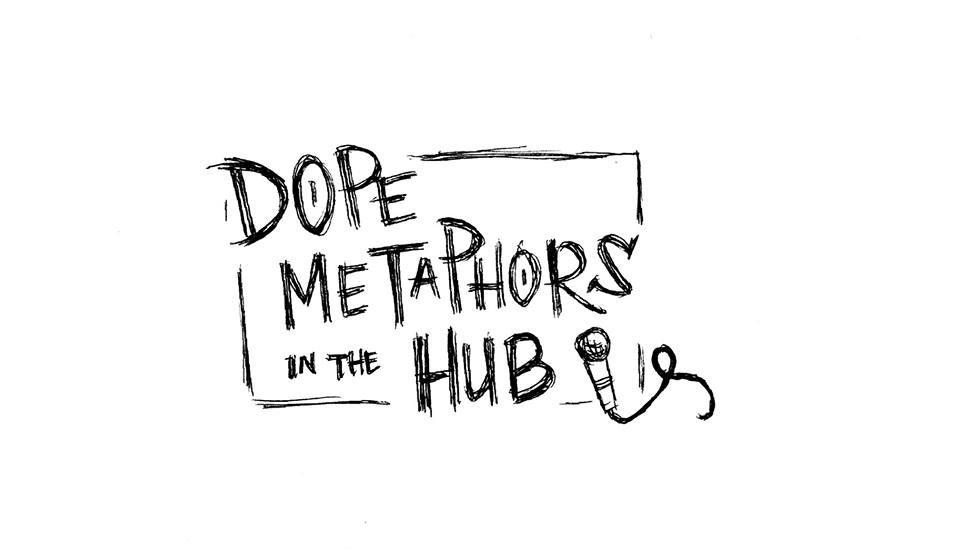 An event held on a Sunday evening is never going to get a huge turnout, but at a showcase featuring fledgling poets, a smaller crowd is probably a lot easier to face. Dope Metaphors in the Hub was organised by the Poets Club and consisted of a variety of spoken word performances, plus some local musicians. Food and drink was provided by Coffee Collab, where the club holds their open mic nights every second Thursday.

Having attended a few of these mic nights, I’d heard several of the poems more than once before, but even someone unfamiliar with Poets Club would have been able to spot the less practiced performers from the varying levels of confidence and occasional fluffed lines. However, despite this, the audience remained attentive, clapping for each performer as well as any particularly good phrases. This was at least partly due to the efforts of Frankie Cunningham and Sam Crane, who run Poets Club and worked hard to encourage both the newer poets and audience participation throughout the show. At one point, Crane made a special note of second-year Mariana Serna, who he said last performed her piece “the most nervous I’ve ever seen anybody do anything” and, on Sunday, “came out … with the most swagger, and destroyed that thing.”

Cunningham both opened and closed the show with his poems “Never Write Love Poems on a Sunday” and “Declassified Poetry Survival Guide.” He was a good choice to warm the audience up since he managed to get some laughs, but his very practiced and fluid delivery also meant he was a tough act to follow. That said, most of the more nervous performers warmed up fast and also probably appreciated performing earlier so they didn’t have to stew in their own anxiety for too long. Serna in particular got a lot of applause from the audience for her feminist poem “Namow” about the male gaze and the pressures women face to look and act a certain way.

In general, the audience responded most to humorous moments or political statements as seen in Serna’s piece, though these were a bit scarce. Perhaps unsurprisingly for a student showcase, most of the poems tended to be about relationships and heartbreak. Even Carlos Ortega, who said he “started writing poems because [he] felt mad” and so he could “vent [his] emotions on paper rather than with [his] fists,” only had one poem about societal issues, although the speed and slight quietness of his delivery made it difficult to catch. Other moments of note included Jason Chun’s poem “Upon Informing You That I Am, in Fact, an English Major,” which was a lot angrier and more energetic than his other piece, and accordingly got way more of a reaction with lines like “real men watch other men chase balls.” Poems about non-romantic love, like Crane’s humorous “An Abbreviated List of Shit I Hate” and Alex Desales’s “Creasy,” both about their mothers, also stood out. Desales’s poem in particular avoided generic imagery and had a good narrative structure on top of being performed with confidence.

Having poets like Frankie who had two pieces perform them at separate points in the evening was a good idea to keep the evening varied, since some of the poems were on the longer side. The performances from local musicians also served to break up the poetry, including one from Max Goldenstein whose band, Sun Daes, performed last Friday at Biko House for the Catalyst after party.

All in all, while the subject matter could have been more varied, it’s rare to see so many different styles and approaches to poetry in one evening. The showcase was a great opportunity for those less familiar with spoken word to experiment and to increase their confidence by getting used to performing.