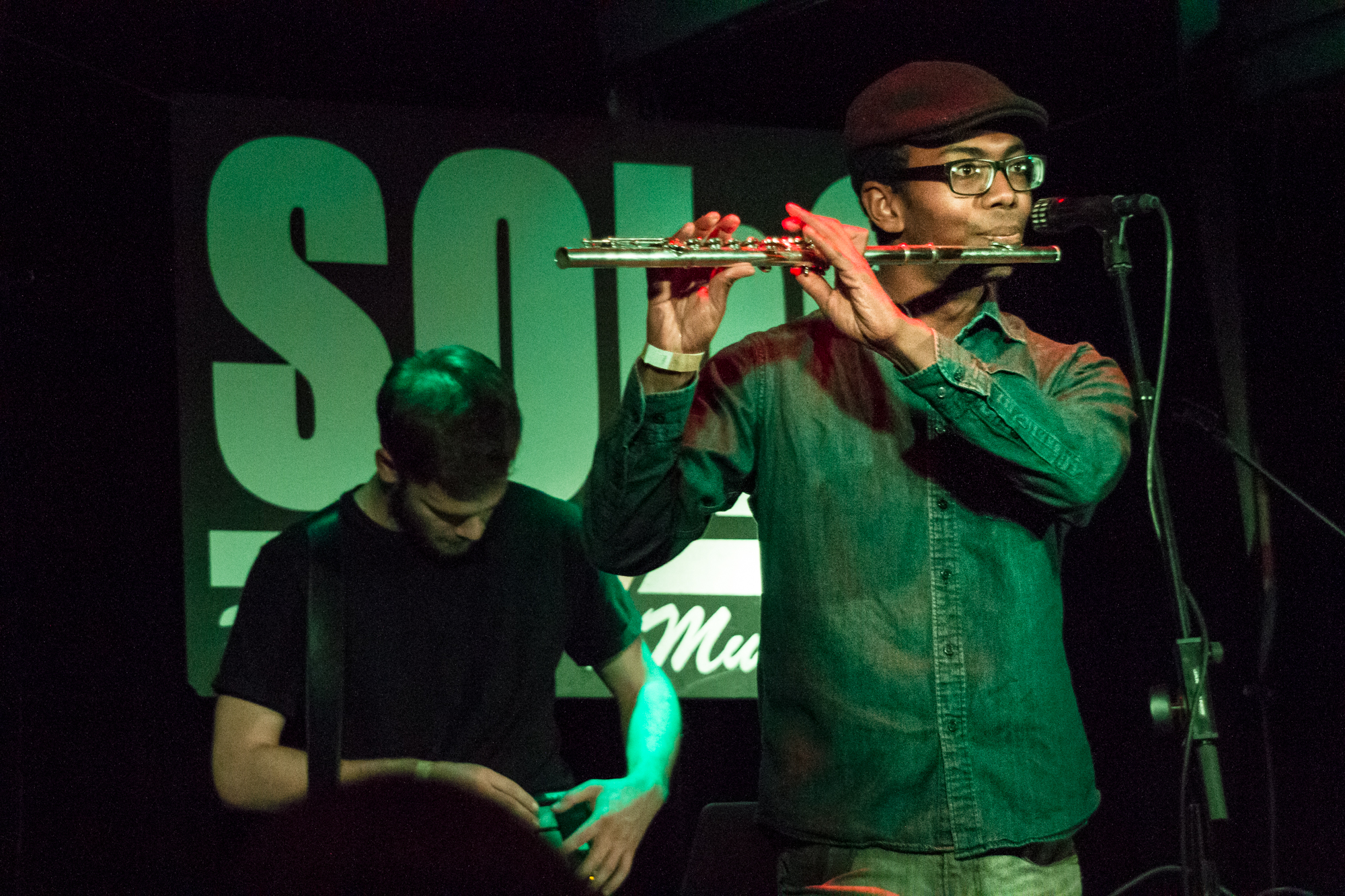 Walking into the dimly lit room at SOhO in downtown Santa Barbara Thursday night was a bit like walking into a reunion with old friends. Groups of people were scattered across the room or sitting at tables anticipating Azeem Ward’s first public performance with Timmy Linetsky — otherwise known as Underbelly, who is a current student at UC Santa Barbara and Ward’s co-headliner for the night — in Santa Barbara since he graduated last spring. “We met one night at an open mic right after he blew up. We jammed once or twice and then spent the whole summer planning tour dates in Europe,” said Underbelly. The duo travelled all over Europe this summer, bringing their unique fusion of beatbox flute and jazzy hip-hop electronic bass music to people who had watched Ward’s senior flute recital last year when he became an overnight internet sensation in the United Kingdom. This concert was Ward’s discreet homecoming, and many of his close friends were in attendance. “I was really worried no one would come because we could have promoted it better, but a lot of people ended up being here,” said Underbelly. The night began with a DJ set, which the crowd met with mild enthusiasm, up until the last song where a break-dancer took over the floor with dangerous-looking dance moves.

As soon as Azeem Ward and Underbelly set up on stage, the pit flooded with the bodies of excited college students. Not long after, a surprise special guest — rapper DGA, who has been close friends with Underbelly since high school — took the stage. Their first song was a funky collaboration between the two of them, where Ward showed off his signature beatbox flute. The crowd’s response to hearing Ward’s unconventional music was overwhelmingly positive. “The crowd had a lot of hype considering the size. People really respond to Ward, they are genuinely into it, not in a condescending way,” said DGA. “People know this is kind of funny because its flute, but they also know it’s really good.” The trio soon started playing groovier and groovier songs, such as a flute remix of “Sexy Back” by Justin Timberlake.

The night then took a more sensual turn when Underbelly announced that he and Ward were about to play some slower, sexier tunes. If the audience was not aware before, they instantly became believers in the fact that the flute could create some sexy beats as Ward continued to deliver smooth note after smooth note. Frequent beat changes and seamless runs defined Ward’s covers and original music, keeping the crowd mesmerized.

Before the tempo changed from slick and slow to sleep-inducing, Ward and Underbelly reintroduced DGA onstage. The arrival of DGA prompted Ward to announce to the relaxed crowd that he was about to play some of his harder songs. The audience quickly learned what his “hard songs” were high intensity party songs that rekindled the previously calmer energy in the venue. However, it wasn’t until Ward and Underbelly played the first note of their famous cover of Darude’s “Sandstorm” did the crowd completely lose any inhibitions they may have had, grooving and dancing along to the beats. Ward’s flute melodies coaxed the more whimsical personality traits of a few of the concert goers to surface — some boys mimed having a tea party on the venue floor as everyone proceeded to wildly dance and mosh around them.

Throughout the night, the crowd remained completely supportive of their fellow Gauchos Ward and Underbelly. The night progressed as if Ward was playing at a friend’s house show rather than a venue in downtown Santa Barbara. “I expected to see a lot of friends from back home, but I didn’t expect many other people to come since we had to promote this ourselves,” said Ward. “This show was a lot of fun, when you have a connection with people it’s easier to play.” The crowd even broke into the famous UC Santa Barbara “Olè Gaucho” chant, to which Ward adorably shuffled to onstage right before taking a group picture with anyone who could fit into the camera frame.

Although this small, intimate concert didn’t garner as much attention or press as Ward’s grand senior flute recital, Ward preferred the cozier setting. “My recital was a lot of pressure, this one was a lot more fun,” Ward said.