The Daily Nexus
Music
Vince Staples Delivers Comedy and Hip-Hop at the Hub
November 24, 2015 at 8:47 am by Nisa Smith 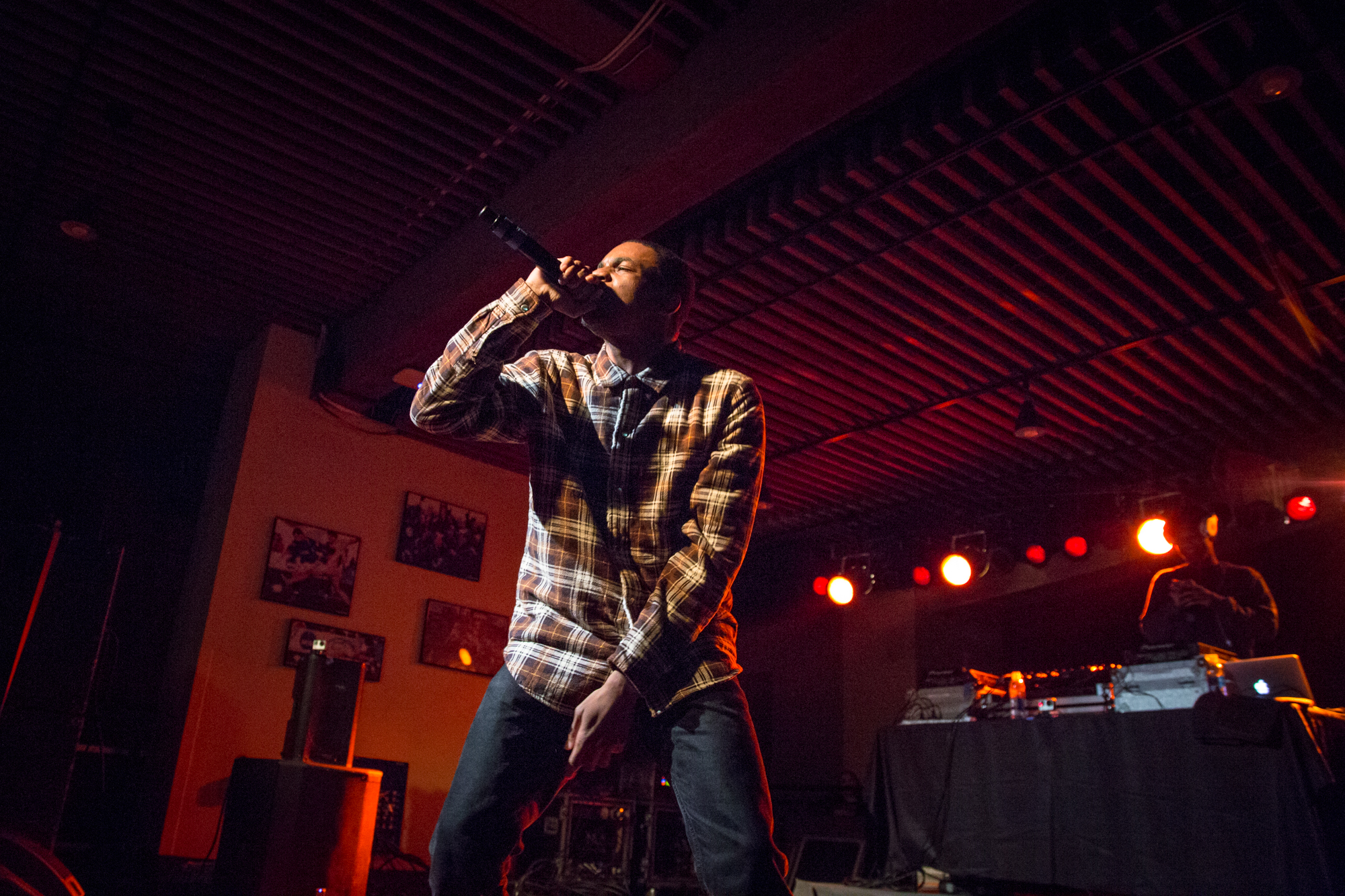 The absence of a DJ set a relaxed precedent for the night. When the doors opened, attendees were met with the daunting, yet serious tone of Tupac’s “Hail Mary.” The playlist that replaced a DJ continued with tracks that were not as energetic as one would anticipate for a concert. Such tunes included ASAP Ferg’s hardcore “Fuck Out My Face” and Travis Scott’s “Mamacita.” By the time Future’s captivating “Commas” single came into rotation, concertgoers were content with swaying to the beat and keeping their eyes glued to the screens of their gadgets, for there was no DJ to encourage them to go crazy.

Ready to spin the night in a better direction, opener, Chayetione, came with rhymes, a flow and jokes to please the crowd. The Santa Barbara native entertained as he admitted, “I don’t have a DJ right now, ‘cause I’m low budget.” He concluded, “but, I do have an iPod shuffle.” As his reliance on the iPod suggested, his set was not in any particularly preplanned order. Instead, he rapped on the fly as the beat to each track echoed throughout the venue, unbeknownst to him since the screen to his iPod was cracked. In fact, his ability to adapt to each song within seconds made his set engaging and intriguing. Concertgoers chuckled as Chayetione vocalized his approval and excitement of each of the surprise songs.

The lyricist bounced around the stage as he spewed out lyrics with his old-school flow. Chayetione sought to uplift and inspire with tracks like “Life,” “Hate Down Peace Up” and “Dream,” which he wrote when living out of his car in Los Angeles two years ago. His beats and flow echoed rappers of the late 1990s and early 2000s, proving that Mos Def, Common, and Talib Kweli are indeed amongst his greatest rap inspirations.

The buzz Chayetione manage to invoke amongst the crowd fizzled as soon as it developed. As he ended his set with a Mr. Carmack sample, students had to endure another wave of mundane songs, occasionally alternated with tracks by Future and Schoolboy Q, from the infamous inconsistent playlist as they awaited the man of the night.

Unaware and unconcerned with the rollercoaster of emotions the audience had endured, Vince Staples burst on the stage at 10:03 to “Lift Me Up,” fully equipped with the energy necessary to lift fans up out of their funk. After stomping all over the stage in his high top Converse, the rapper paused to advocate for homework over concerts and relay hi amazement at the fact that there is a Panda Express on campus. The Long Beach representative cut back into his set with “65 Hunnid,” before opting to perform the latter part of the track without its accompanying instrumental.

A far cry from their behavior earlier in the evening, audience members grew rowdy throughout Staples’ set. As the 22 year old continued with tracks “Dopeman” and “Hang ‘N’ Bang” from his debut album Summertime ’06, the crowd grew just as wild as the performer with their nonstop pushing and shoving. Although the Norf Norf emcee produced such excitement from the onlookers, they grew irritated with his various monologues – ranging from his frustration towards his photographer/videographer to a rant on pregnancy. In fact, students begin to evacuate the Hub and save their self from the endless jokes and rants.

Although the show fell somewhere in between a failed Chris Tucker standup comedy skit and a rap concert, those who stuck out the rambling won performances of fan-favorites. The instant Vince rapped the first bar to “Norf Norf,” second-year, Derrick Duren exclaimed, “Finally!” before slithering his way to the front row. The crowd chanted the lyrics “I ain’t never ran from nothing but the police,” although the bulk of the crowd has probably never had to dodge such police encounters.

Staples concluded the show with first-year Vanessa Ayala’s favorite song, “Blue Suede.” In spite of the new invasive privacy policy, the Snapchat app was plastered on every cell phone in hopes of capturing the “Blue Suede” performance. Ayala shared her appreciation for A.S. Board Program noting, “it’s really dope, cause it’s at my school, I was super hyped.”

In spite of the mediocre DJ-replacement playlist and excessive talking from Staples, concertgoers left the Hub in decent spirits. To hear more from the chatty rapper, Summertime ’06 is available on iTunes and Chayetione’s nostalgic tracks can be found on his self-titled soundcloud.