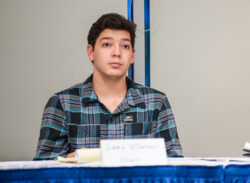 UCSB Associated Students has attained an “in compliance” status with the Internal Revenue Service (IRS) after filing IRS Form 990 for three consecutive years, having failed to do so for 12 years prior.

A.S. President Jimmy Villarreal said the current A.S. Executive Director Marisela Marquez addressed the IRS non-compliance issue by hiring lawyers to work with A.S. after she was hired in 2008.

“From 2008 to 2012, that’s when we were in contact with lawyers,” Villarreal said. “Not just UC lawyers but we also brought in outside lawyers just to try to figure out where we were. We contacted the general counselor for the UC, so with their advice, we went to another lawyer who specializes in IRS matters.”

Marquez said the University of California Office of the President (UCOP) contacted her about the IRS non-compliance issue.

“I had been working here in my office and UCOP called me up one day asking me why we haven’t been submitting our own 990 document for the prior 12 years,” Marquez said. “I researched it and I found out the reason; prior to that there had been an understanding that turned out to be a misunderstanding.”

According to Villarreal, A.S. did not file the form for 12 years due to confusion about the relationship between the UCen and UC.

“The reason why we weren’t filing before that was because at the time, we shared the same track ID number with the UCen because technically we are in UCen property,” Villarreal said. “Because the University files for the UCen, the UCen thought the [University was] filing for Associated Students. But they were not.”

Marquez said it is difficult to categorize the tax status of A.S because it follows policies from UC Regents, A.S. Legal Code and regulations as a nonprofit organization.

“The mix-up occurred because we are both a department for the campus and system, and we also hold our own tax ID number,” Marquez said. “Students wanting to be independent from the university have maintained both levels of responsibility.”

Villarreal said A.S. is working with lawyers to research whether A.S. should be recognized as a UC-affiliated organization.

“We’re not even sure if we have to file 990s and that is still something we’re still trying to figure out with our lawyers because we’re under a governmental entity which is the University of California,” Villarreal said. “So even now we’re still working on exactly figuring out if this is something we have to do.”

Villarreal said because A.S. has an unclear affiliation with the UC, he does not know whether A.S. will incur penalties from the IRS.

“It is a possibility that there could be fines incurred, but I’m not really sure how much,” Villarreal said. “But we have the funds that we can use for that and we can take care of it if need be. I don’t expect that to happen, but it could.”

“IRS issues have been present in the Association for the past few years and it is an issue that the A.S Executive Director has been dealing with, informing the president and senate with updates,” Mariano said in an email.

Mariano said it is unlikely the student body will be affected by the A.S.’s non-compliance with the IRS as long as A.S. continues to communicate with the IRS.

“Personally, I believe that there isn’t much impact for the student body and student fees as long as the issue is being dealt with, which the Executive Director has been doing as mentioned before,” Mariano said in an email.