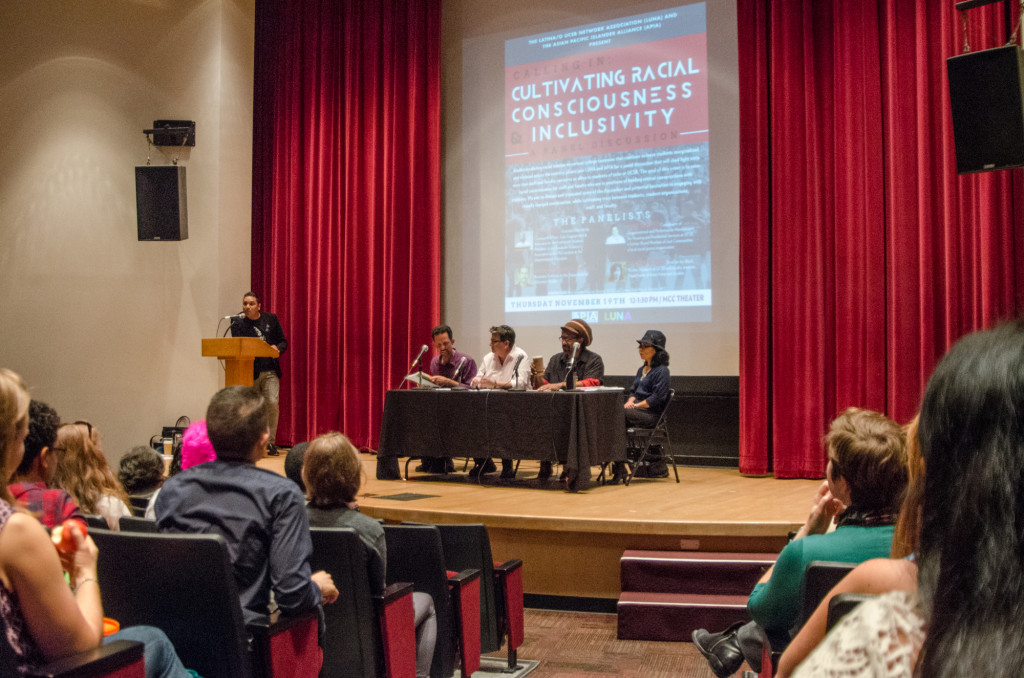 Recent racially charged incidents — such as those at University of Missouri, Yale, UCLA, University of Michigan, University of Oklahoma and Harvard University – are raising the question of how UCSB staff and faculty can better serve as allies to students of color. Four panelists at the event, Lisa Slavid, Diane Fujino, Aaron Jones and Ralph Armbruster-Sandoval, spoke about why U.S. campuses are experiencing racial tensions, how racial consciousness manifests itself on college campuses, how to speak on race in a classroom and freedom of speech.

“Racism has changed,” Fujino said. “The work in the ’50s was to legitimate that racism existed and it was wrong, but today, there is more knowledge that racism is wrong, and the work today is really to prove that it still exists.”

“It is in all things,” Jones said. “If you’re a fish in water, you can’t see the water, doesn’t mean you’re not in the water. We’re living in it, we’re breathing in it. It’s in our society, so of course, it’s going to be manifested on a college campus.”

Coordinator of organizational and performance management for Housing and Residential Services at UCSB Lisa Slavid said she is not surprised to see racial consciousness manifest on college campuses.

“Really, where else in the country would they manifest?” Slavid asked. “Colleges are part of the institutions of the country, and these conversations need to happen. They won’t be happening in the companies or corporations of Google or Facebook or J.C. Penny, they will be emerging here.”

“We’re supposed to be able to engage in these kinds of dialogues. If we can’t have those types of dialogues and conversations in a university, then we’re in really bad shape,” Jones said.

Associate professor of Chican@ studies Ralph Armbruster-Sandoval said such conversations should not be limited to certain majors.

Armbruster-Sandoval said people need to discuss their different views and opinions to begin a dialogue.

“A lot of people have a problem with the name ‘Black Lives Matter,’ and that’s okay, but we need to talk about this,” Armbruster-Sandoval said. “How are we going to work this through otherwise? It’s not easy to have a conversation about these things — it’s a very difficult thing to walk through, but I don’t think it was fair for people not to talk about it.” 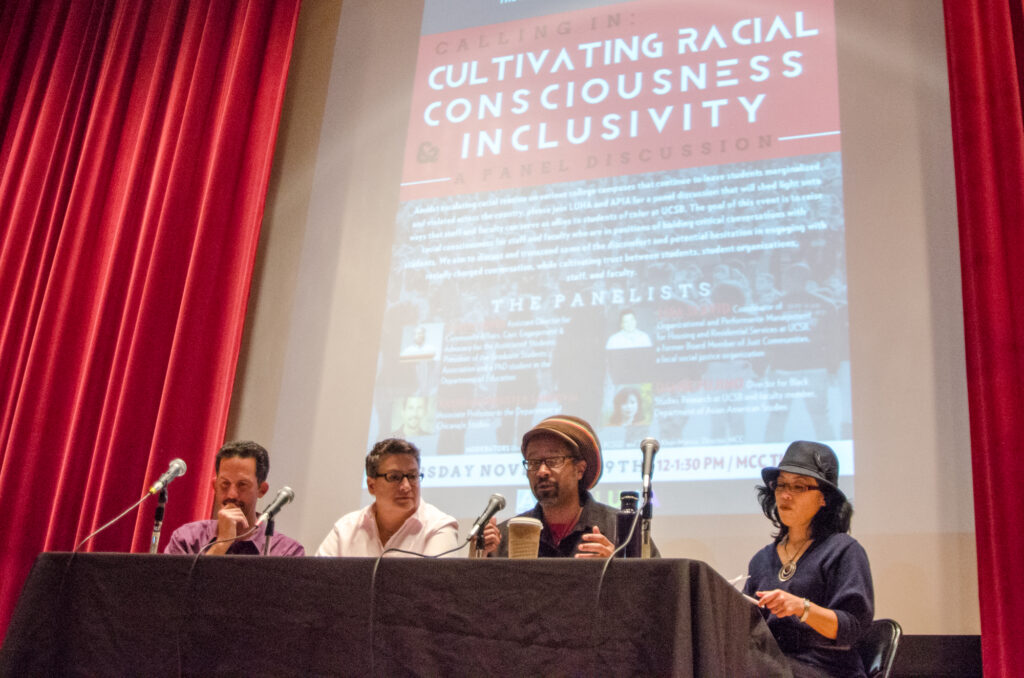 Slavid said conversations about racial issues may be difficult because of fear.

“There’s a silence, and it’s mostly because people are afraid,” Slavid said. “They’re afraid to say the wrong thing.”

Fujino said these conversations can be difficult to approach in a class setting, but faculty and staff must work to appropriately address the issues.

“For professors, it’s trial and error and if we’re dedicated, we talk to colleagues to figure it out,” Fujino said. “There is increasing attention to issues of what they call ‘diversity,’ that means it’s built instructionally. The faculty need to create a space in classrooms so that people can speak, and I also think what it takes is to evaluate and listen to each other.”

According to Slavid, faculty and staff can be allies at UCSB by trusting and listening to students’ perspectives.

“As a white ally, recognize that people of color’s lived experiences are different than yours,” Slavid said. “Show up, listen to learn, but also know when to speak as an ally, even if it makes you nervous, because our silence on topics of racial injustice is part of the issue.”

Associate Director of LGBT Services in the Resource Center for Sexual & Gender Diversity Klint Jaramillo said he knows students with questions about racial issues want to have conversations.

“Hopefully we can move forward and make spaces like this for faculty and staff so we can not only support each other, but support our students,” Jaramillo said.

Divide-and-rule (“cultivating racial consciousness”) is the oldest game in the book. ALL workers and youth are being increasingly devastated by tuition hikes, reductions in salaries and benefits, elimination of pensions, rising health care costs, and shrinking job opportunities. And while African Americans are proportionally more subject to being the victims of police violence, the fact is that more European Americans are killed by police each year than any other ethnic category–in America, there is no shortage of cop violence for all. At a time when workers and students desperately need to unite to fundamentally transform human society before it implodes,… Read more »

And not a single person at this event offered a dissenting perspective?

They say that “If we can’t have those types of dialogues and conversations in a university, then we’re in really bad shape,” but they endorse the actions of protesters on other campuses who are actively silencing conversation.

College campuses shouldn’t be “safe, educational spaces.” they should be free ones.

Also, I resent the “fish in water” analogy of privilege. We’re human beings, not fish. And water is measurable and provable, even if it’s not visible. So if such a thing as privilege exists, you should be able to provide some evidence, not talk down to me like I’m incapable of reason and have to take your ideas on faith.