The Daily Nexus
News
El Centro Hosts Second Annual Open House To Show its Role as a Safe Space on Campus
November 20, 2015 at 5:00 am by Olivia Pla 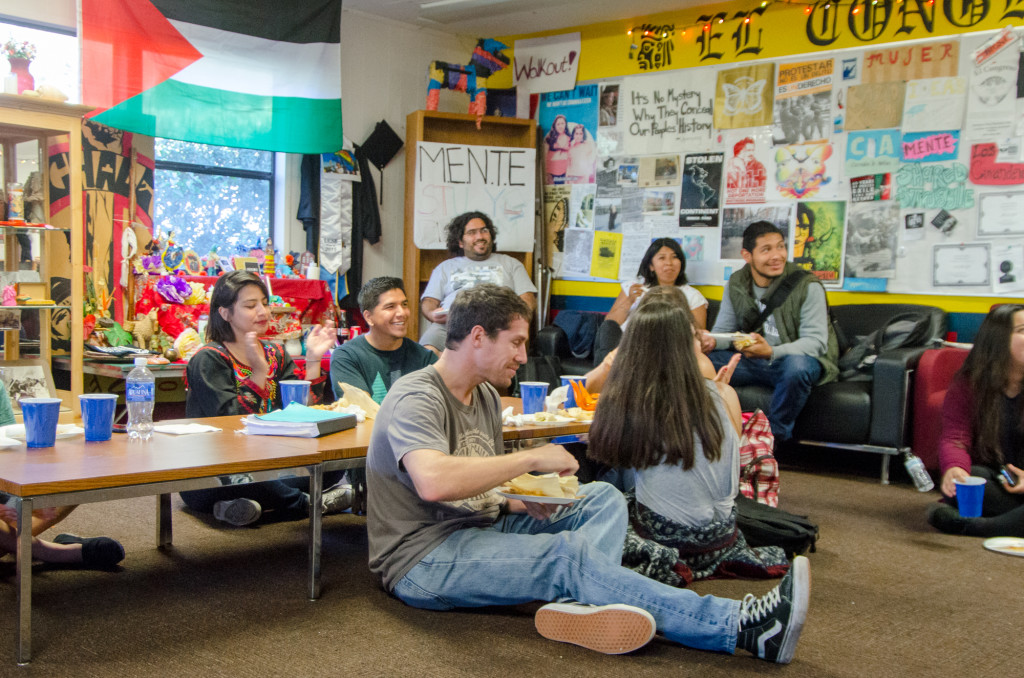 El Centro held its second annual open house on Thursday to educate students on its role as a safe haven for organizations and people of color.

Located behind the library, El Centro has served as a space for students of color to congregate and feel safe since the 1970s.

It was originally created by Chican@ students in reaction to a hunger strike, but El Centro has grown to welcome all students of color as well as many organizations. The event was hosted by Mesa Directiva, a conglomerate of all the organizations that meet in El Centro, including El Congreso, Students for Justice in Palestine and Radio Xicana.

Second-year English major Lorena Alvarez said she did not feel at home on campus until she found El Centro, and was hopeful Thursday’s open house would help students find a secure place.

“For me, El Centro is a home, and I want to provide an opportunity for students to find a home like I did because I know I was lost on campus last year, and without El Centro I probably would not have stayed at UCSB,” Alvarez said.

Second-year history and math double-major Minal Habash said until she discovered El Centro, it was hard to find people who understood the difficulties of minority students at UCSB.

“For minorities, it’s hard to find support with a lot of the problems that we face, but El Centro is a great place to come to be able to find other people who also feel unappreciated on this campus,” Habash said. “It was the first place on campus where I really felt safe.”

Habash said El Centro does not have the same amenities as other buildings. Until recently, El Centro did not have lights outside the building, nor was it labeled on the campus map.

Alvarez said El Centro has also had to deal with the adverse effects of being located next to the library, which has been under construction. Now that many of the construction fences, which had obstructed students’ view of the building, are gone, Mesa Directiva wanted to host an open house to show students that the building exists.

Fourth-year black studies and sociology double-major Ocil Yuleima Herrejón Rivera said El Centro has been facing obstacles ever since she was a freshman. She said many of the problems are due to the fact that El Centro is a student-run building, making it more difficult for the students to get simple necessities in the building like a hydration station, outdoor lights and computers.

El Centro’s second floor is reserved for engineers, but students say engineers rarely use it because they have their own, separate building. Rivera and many students who use El Centro would like to use the second floor to increase the resources for students who need help.

As El Centro strives to accomplish these goals, the students will continue to host an open house every year to grow the membership of the organizations that meet there.

First-year math major Matt Uffenheimer attended the event and was glad to know the building’s purpose.

“I’ve always wondered what the building was for. I had no idea it was a meeting place for so many organizations and people,” Uffenheimer said. “Even though I’m not a student of color, I’m glad I’m now aware of the importance of this building to the people who use it.”