The Daily Nexus
News
Students Express Solidarity with Mizzou Protests
November 19, 2015 at 5:00 am by Nicholas Bogel-Burroughs 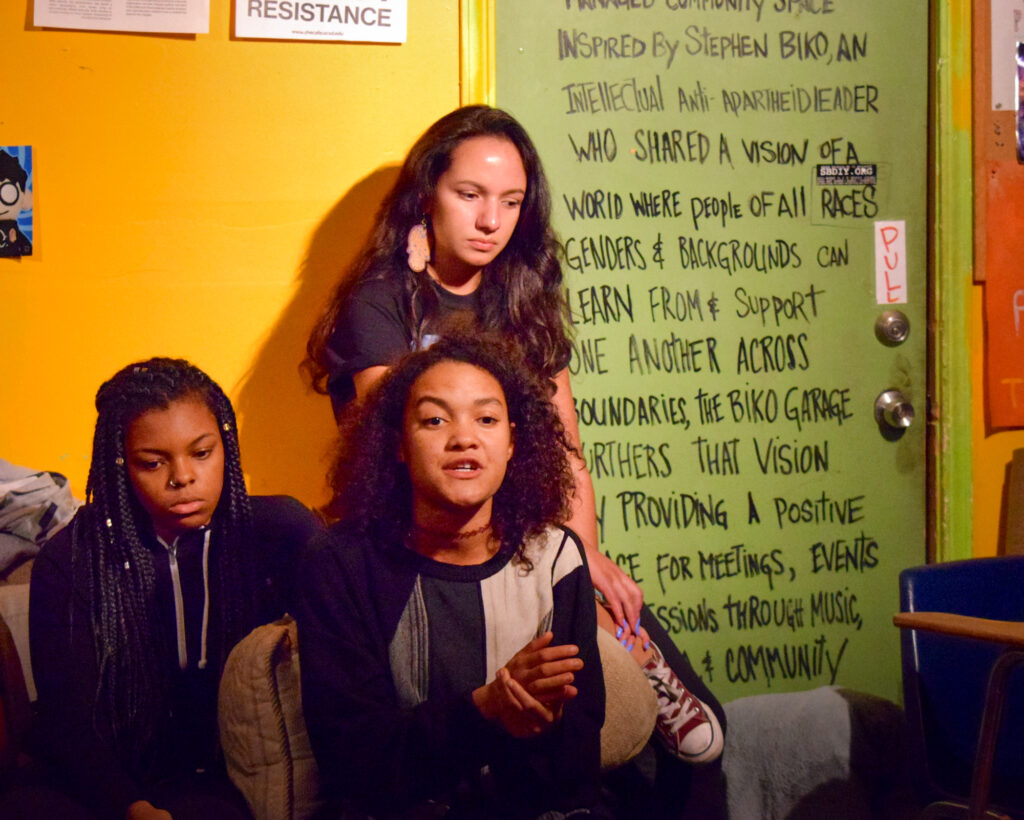 The meeting was held in light of recent racially charged occurrences at the University of Missouri. Effie Sklavenitis/Daily Nexus

In a dimly-lit Isla Vista garage, about 45 students, local residents and UC Santa Barbara staff members convened on Wednesday to support University of Missouri protesters, share their difficulties as people of color and discuss the most effective means of overcoming these trials.

The garage is part of the Biko House, a 12-bedroom co-op specifically oriented to people of color and named after Stephen Biko, the leader of the black consciousness movement in South Africa who died in police custody in 1977. Attendees initially focused on solidarity with protesters at the University of Missouri, who campaigned to remove then-president Timothy Wolfe for his handling of racial tensions on campus. The two-hour conversation quickly shifted to the struggles of black students at UCSB, who comprise four percent of the student body. The meeting had no specific agenda, allowing for an open conversation between college-age students and supportive community members, very few of whom were white.

The Santa Barbara Student Housing Cooperative describes the garage as an “all-purpose community space for radical meetings,” and students within its neon walls — plastered with stickers and reminders that the garage is a safe space — spoke freely on white supremacy and institutional racism while trying to determine how to build on the progress of black civil rights leaders and modern activists.

When thinking like this physically puts my life on the line, what does it mean to be committed? We really need to be talking about what a sacrifice looks like. I want this space to be a time where we really know what solidarity is.
– Organizer Nia Mitchell

Organizer and fourth-year environmental studies major Nia Mitchell said she is fully committed to striving for the rights and safety of African-Americans.

“When thinking like this physically puts my life on the line, what does it mean to be committed?” Mitchell asked the attendees. “We really need to be talking about what a sacrifice looks like. I want this space to be a time where we really know what solidarity is.”

Mitchell proposed a fundraising initiative to fly five University of Missouri students to UCSB in February for the 12th annual Afrikan Black Coalition Conference, which aims to unify black students throughout the University of California.

“There is a problem within A.S. that we are not representing you accurately,” Natarajan said, noting that there are currently no black senators in A.S. “I would love to aid you all in any way that I can in my capacity, and my colleagues would as well.”

As the sun set and people trickled in, UCSB alumnus David Moore described his recent trip to the “tent city” at the center of the University of Missouri protests.

“In the tent city there was an atmosphere of kindness, generosity, love and enthusiasm,” Moore said. “They didn’t need me to help them think or talk, but they needed someone older to affirm, to say, ‘You just need to know that we believe in what you’re doing.’”

First-year psychology major Lauryn Westbrook said racism in places like Missouri is much easier to identify, and questioned California’s progressiveness.

“The difference between here and Missouri is that people are a lot more vocal about their racism [in Missouri],” Westbrook said. “Things like [the vandalism at] St. Michael’s aren’t talked about, so people don’t think it happens. I don’t know how much of a progressive state we’re in.”

A lot of folks are saying they feel revived and invigorated, and it’s this temporary feeling of freedom that allows me to use my imagination to dream of something better than what has been given to me, what I’ve been born into, and what I thought of as, ‘This is just how it is.’
– Organizer Sue Abdurahman

Organizer and third-year black studies and sociology double-major Monaé Orange said she was surprised to see non-black students at the event, which was focused specifically on black lives.

“I wasn’t really expecting other people-of-color groups to come and support and show their solidarity, so for me I think it was really important to have this space for them to hear what [we], as black students, experience,” Orange said. “We know that we’re in the same struggle, so that connection that just happened, it’s important because they’ll go back and talk within their own organization meetings and they’ll talk about what’s going on here.”

Organizer and fourth-year black studies major Sue Abdurahman said she and other activists wanted to advocate for tangible, progressive changes for the black community, instead of gathering to “just take pictures and put up a hashtag and forget about it in a couple days.”

“When there’s time to create spaces like this, beautiful things happen,” Abdurahman said. “A lot of folks are saying they feel revived and invigorated, and it’s this temporary feeling of freedom that allows me to use my imagination to dream of something better than what has been given to me, what I’ve been born into, and what I thought of as, ‘This is just how it is.’”

Abdurahman said she and other activists are prepared to work hard to make major strides in how individuals and the country as a whole treat African-Americans.

“This country is built on the genocide of indigenous folks and the slavery of black folks, but we weren’t the architects,” Abdurahman said. “If we use our imagination, we can become the architects of our future, and that’s revolutionary.”

The activists made their resolve clear: the safe space is a first step, followed by real change.

A version of this story appeared on page 1 of the Thursday, November 19, 2015 print edition of the Daily Nexus.

“In the tent city there was an atmosphere of kindness, generosity, love and enthusiasm.”

Tell that to the student reporters they attacked and called for “muscle” to be used on. But let’s face it, the creation of a “safe space” is always dependent on force to remove unwanted elements.

Jason Garshfield is a Pathetic Reactionary
Reply to  Jason G

How badly do you want white men to be oppressed Jason

Jason G
Reply to  Jason Garshfield is a Pathetic Reactionary

I don’t want anyone to be oppressed or treated with violence. Do you?

Jason, if that’s true, why do you participate in the oppression of minorities by blatantly denying their struggles? I’m sure you’ve considered the possibility that, because you are a white male, you cannot possibly understand what non-white, non-males face on a daily basis. Why do you argue so adamantly and stubbornly for your causes?
You seem like a highly intelligent person, however, I feel as though you are intentionally saying things in order to illicit a reaction.

@confused: graduate. As an alum, you need to get out there big guy.

I argue for the causes I do because almost no one on campus is saying these things. Race is a complex issue and I’m certainly not denying the existence of racism in our society. But that doesn’t excuse the bullying actions of a lot of supposedly anti-racist protesters. At Mizzou, we saw protesters menace an innocent reporter in a public space. (By the way, the reporter was Asian-American and the protesters physically attacking him were mostly white.) Regardless of larger racial issues in society or at Mizzou, those actions are clearly and definitely wrong – and yet there’s been almost… Read more »

Jason, what you may not get, but perhaps one day will, is that African Americans are awaiting representation in the media. Until them, we need to sometimes exact measures to monitor the narrative that would otherwise be controlled by whites and those who fawn over whiteness.

Divide-and-rule is the oldest game in the book.

The dominant economic classes in the US–and the well-paid “liberal” academics who provide them with ideological support–love nothing better than for students and self-styled radicals to remain obsessed by racial, cultural, and gender identity.

Just makes it so much easier to continue the ongoing viscious assaualt on the working class as a whole. Including–and especially–it’s most vulnerable component, the African-American working class.

All the “safe spaces” in the world will not save you when the crap really starts to fly. But international working class unity just might.