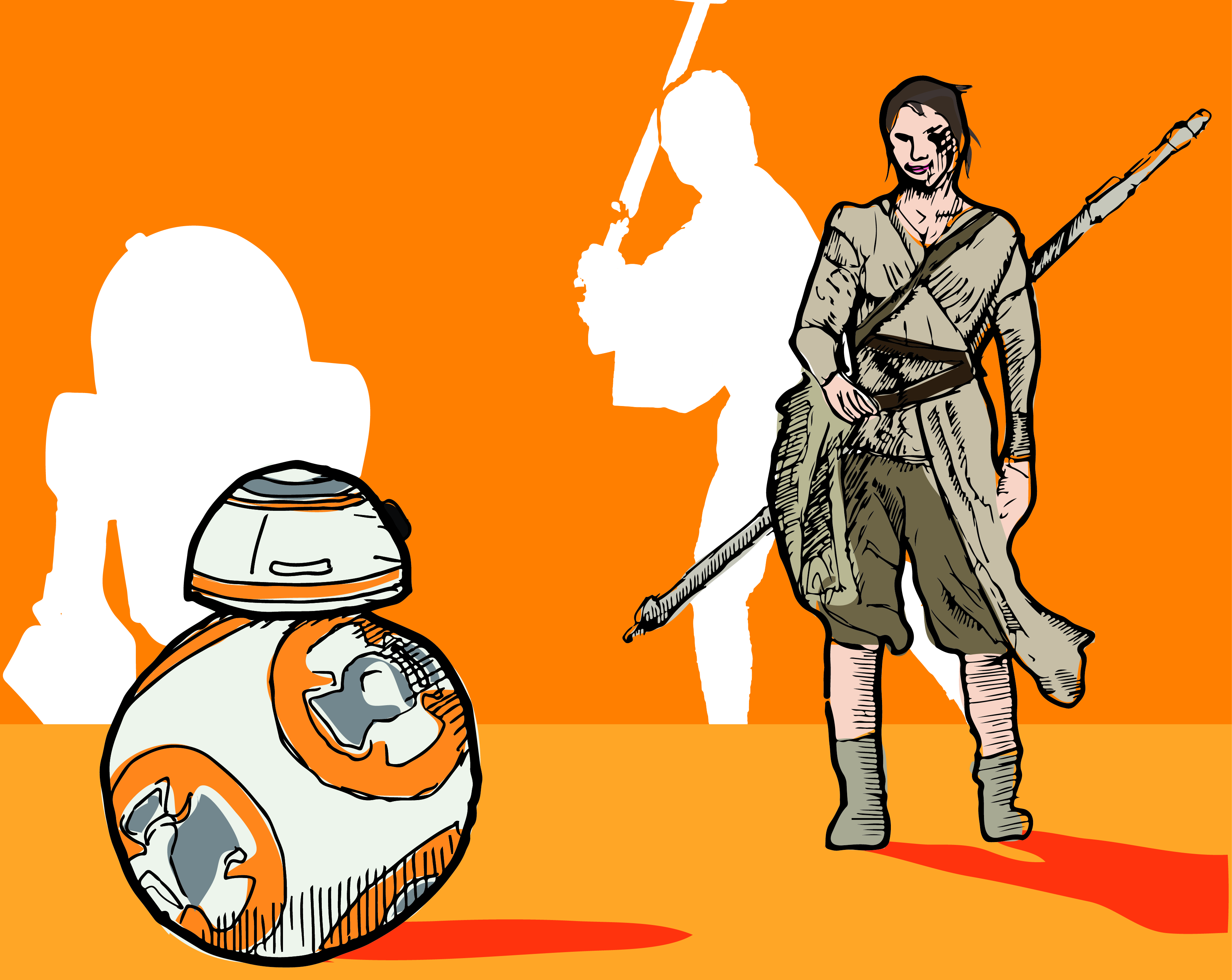 On Dec. 1, 2014, comedian Stephen Colbert dedicated his show’s opening segment to an impassioned recollection of a moment from his childhood: seeing “Star Wars: A New Hope” a whole two weeks before any of his friends did. Colbert, who won two tickets to an advanced screening from a radio station in eighth grade, recognized immediately that “Star Wars” had changed everything and lamented the fact that none of his classmates yet understood his love for that galaxy far, far away. Although Colbert has been a “Star Wars” fan a whole two weeks longer than most people, ask any person who was young during the summer of 1977, and I bet they will have a similar story to tell.

The success of “Star Wars: A New Hope” was truly unexpected and unprecedented: the film was turned down by United Artists, Universal Pictures and Disney, but was finally budgeted a measly $8 million by 20th Century Fox. It opened on a Wednesday in less than 32 theaters nationwide, with even George Lucas forgetting the film’s premiere. The film was an immediate smash hit — theaters quickly began demanding the film, and Fox’s stock price doubled in three weeks. “Star Wars” quickly became the most successful film they had ever released. All this from a film that Lucas so expected to flop that he wrote a self-contained storyline in case he was denied future funding.

In 2012, after five more “Star Wars” movies and a handful of ill-fated TV specials and animated features, Lucas sold Lucasfilm, along with the “Star Wars” and “Indiana Jones” properties, to Disney for $4.05 billion. With George’s empire now in their hands, Disney quickly announced a new trilogy of films, with “The Force Awakens” taking place roughly 30 years after the events of “Return of the Jedi,” as well as three stand-alone films focused on specific characters. The Internet, of course, went wild.

With less than a month left until “The Force Awakens” premieres in North America Dec. 18, 2015, how much do we actually know about the film? Unsurprisingly, very little, with a lot of room for speculation. Between a handful of teasers, two trailers (one Japanese) and a 60-second spot, we can infer a lot about the film.

Even 30 years after the death of Emperor Palpatine, the galaxy still finds itself in a struggle for peace, with the Empire replaced by the New Order, led by a new masked darksider, Kylo Ren, a member of the Knights of Ren, a cult devoted to “finishing what [Vader] started.” Fighting against this new reign of tyranny are scavenger Rey; Poe Dameron, a member of the Resistance, which has replaced the Rebel Alliance; and Finn, a First Order deserter who is somehow in possession of Anakin Skywalker’s lightsaber (y’know, the one that Obi-Wan picked up when he left Anakin for dead and then gave to Luke, who lost it when his hand got chopped off in Cloud City. Yeah, that one). Guiding these young heroes along are near-mythical figures Han Solo, Leia Organa and Luke Skywalker (whose face has yet to appear in promotional content).

It’s not hard to imagine a storyline for this film. Considered together, the original trilogy and the prequel trilogy tell the tale of the fall of a father and his eventual redemption through the help of his son and the triumph of good over tyrannical evil. From the second that he accepts Anakin’s lightsaber from Obi-Wan in “A New Hope,” Luke assumes the responsibility of being his father’s son, and all the good and evil that comes with it. The Rebel Alliance’s toppling of a monolithic, totalitarian and xenophobic imperialist regime was just a secondary benefit of Luke’s quest. And just as Obi-Wan passed the lightsaber on to Luke, just as George Lucas passed the lightsaber on to J.J. Abrams, just as the generation that saw “A New Hope” in theaters passed the lightsaber on to their children, the characters of the original trilogy pass their triumphs and struggles on to a younger generation — a new group of protagonists who are strong as the aging heroes grow weary.

And that’s what this is all about, isn’t it? The passing of the lightsaber — the changing of the guard. “The Force Awakens” boasts an amazingly long cast of series veterans, many of whom are returning to these characters after more than 30 years away: Mark Hamill (Luke Skywalker), Harrison Ford (Han Solo), Carrie Fisher (Leia Organa), Peter Mayhew (Chewbacca), Anthony Daniels (C-3PO), Kenny Baker (R2-D2), Warwick Davis (Wicket the Ewok) and Tim Rose (Admiral Ackbar). The project also employs veterans Lawrence Kasdan, who wrote the scripts for “The Empire Strikes Back” and “Return of the Jedi,” composer John Williams and sound designer Ben Burtt.

And so it was with this “Star Wars” “brain trust” that J.J. Abrams embarked on his labor of love. With the help of Simon Pegg, whom Abrams treated as a sounding board, a generation that had grown up absolutely enamored by “Star Wars” was given the chance to play in the galaxy far, far away while working with many of the people who made the place what it is today. Many of Abrams’s choices hearken back to the original trilogy: heavy reliance on practical effects, scale models and actual set pieces in contrast to the prequel trilogy’s extensive reliance on CGI; the use of 35mm Kodak film and 65mm IMAX in contrast to the digital cameras used for “Attack of the Clones” and “Revenge of the Sith;” and the return of iconic ships such as T.I.E. Fighters, X-Wings, Star Destroyers, a massive spherical superweapon and, most importantly, the Millennium Falcon.

“The Force Awakens” is a second coming of “Star Wars” in a world that was let down by the prequel trilogy. It is made to recapture the childhood that a generation experienced in the summer of 1977. There is absolutely no way that it will not succeed in terms of sales; the real challenge is changing the game and inspiring a new generation, like “A New Hope” did all those years ago. According to Disney, the film’s second teaser trailer, released April 16, 2015, was viewed more than 88 million times within its first 24 hours online. IMAX ticket sales quickly reached over $6.5 million for just the U.S./Canada market, shattering records set by films like “The Dark Knight Rises” and “Avengers,” which had garnered around $1 million each. Ticket sales site Fandango crashed repeatedly while “The Force Awakens” sold more than eight times the number of tickets of the previous record-holder, “The Hunger Games.” Analyst Phil Contrino has predicted that “Star Wars” will easily earn $1 billion and could cross into the next billion. (For reference, “Jurassic World” grossed $1.669 billion worldwide and current record-holder “Avatar” grossed $2.788 billion.) Not bad for a group of scruffy-looking nerf herders.

Here are my thoughts to those who of you who are planning on seeing it — and let’s face it, even if you don’t think you’ll see it, you probably will, and if for some reason you are adamant about not seeing it, it’s probably going to be all you hear about until February — re-watch all six films. That’s right, six. Take in the entire story of the Skywalker family, both the good and the bad, because we may soon be moving on to a new lineage of heroes. Plan on staying off the Internet and social media starting Dec. 14. And if by some weird, freaky, miraculous circumstance you have a friend that has not seen a “Star Wars” film, do not by any means let them watch any before they see “The Force Awakens.” Drag your friend through their protestations — through their kicking and screaming — to see “The Force Awakens” with you. If it somehow ends up being bad, then your friend might be angry at you for a bit. But if it turns out to be anything close to what “A New Hope” was, then your friend will forever remember you as the person who showed them an amazing film that changed their life. You will have passed on the lightsaber and shown them what it’s like to live a long time ago in a galaxy far, far away …

And the Force will be with you. Always.