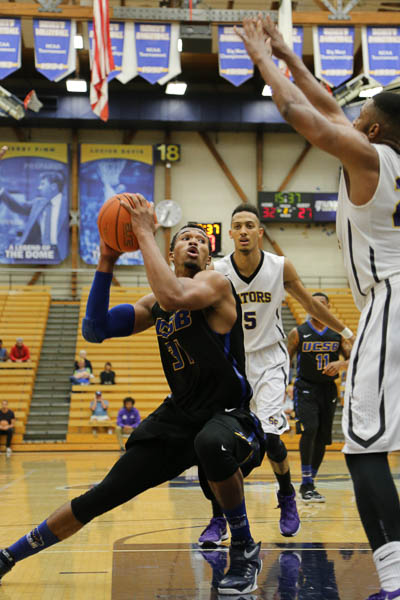 The UCSB men’s basketball team pulled off a thrilling one-point win in its season opener at Nebraska-Omaha thanks to a game-winning tip-in by junior point guard Eric Childress with three seconds left. The basket was Childress’s only one on the night, capping off a 9-1 run over the final 4:19 to give the Gauchos a 60-59 win.

Santa Barbara earned the victory despite playing without senior guard Michael Bryson, the team’s leading returning scorer and rebounder from last season, who was suspended for one game by the NCAA for playing in an unsanctioned summer league game in July.

Shouldering the load in Bryson’s place was senior guard John Green, who led the way with game-highs of 22 points and 13 rebounds. However, with Green fouling out with 3:54 left to play, Childress and sophomore point guard Gabe Vincent took over to bring UCSB back.

After a close first half, the Mavericks finally took control thanks to a 25-4 run in the second half to put them up 58-51.

With his team down by seven with less than five minutes to go, Vincent knocked down a deep three just 25 seconds prior to Green fouling out. Childress followed that up by knocking down two clutch free throws at the 3:02 mark to cut the lead to 58-56.

Omaha’s Tre’Shawn Thurman went 1-for-2 at the line with 1:36 left to go, leading to a pretty driving score by Vincent just eight seconds later to make it a one point game at 59-58.

A pair of missed three-point attempts by the Mavericks gave the Gauchos possession with 38 seconds left. After deciding not to call for a timeout, UCSB freshman Justin Burks failed to connect on a three with 22 ticks to go. Childress was able to rise up and tip the ball out to senior guard T.J. Taylor in the corner, leading to a Gaucho timeout with 12 seconds left.

Senior forward Mitch Brewe received a pass from Vincent and put up a shot with four seconds left that rimmed out, but Childress was there for the put back and Omaha was unable to get off a final shot.

It was a poor shooting night for both teams, as the Gauchos finished shooting just 34.9 percent (22-63 FG) and the Mavericks not much better at 34.7 percent (17-49). UCSB Head Coach Bob Williams was surprised to come away with the win given his team’s 20 turnovers compared to just 10 assists, but the Gauchos were helped out by Omaha’s similar mark of 19 TOs and 10 assists.

Brewe finished with nine points and five rebounds off the bench on a solid 4-5 shooting night. Senior guard DaJuan Smith reeled in a career-high eight rebounds, including four on the offensive end.

Omaha had three players score in double figures, including Thurman with a near double-double at 10 points, nine rebounds, and Randy Reed, who recorded 14 points and eight rebounds while going a perfect 8-8 from the line.

UCSB will be back in action tonight on the road against Cal with tip-off set for 7 p.m. at Haas Pavilion. The Golden Bears came into the season ranked No. 14 in the nation and defeated Rice 97-65 in their season-opener as five different players scored in double figures.