In its final meeting of the regular season, the No. 6 UCSB men’s water polo team was able to defeat No. 9 Pepperdine on the road and secure the sixth seed in the MPSF championships next weekend. Led by senior attacker Derek Shoemaker, the Gauchos set a new season-high for points in a match, beating the Waves 17-8. 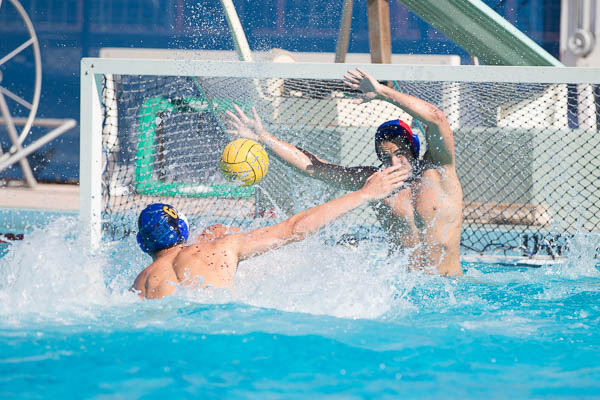 The win lifts Santa Barbara’s overall record to 16-9 and a 4-5 record in MPSF play. The victory also helps the Gauchos avoid playing a tie-in game at the tournament. The loss drops Pepperdine to 11-14 on the season and a 1-8 conference record. The Waves have now lost their last six games, and seven of their last eight.

As a result of the loss, Pepperdine will have the ninth seed in the tournament and will play a tie-in game versus Long Beach State. As the sixth seed, UCSB will have a rematch against No. 2 Cal, who secured its third seed with a victory over No. 5 Stanford.

With much at stake, the Gauchos responded by putting on one of their better performances this season. Although they started off a bit sluggish, an onslaught of 13 goals in the second-half helped propel them to a win in the final game of the regular season.

The match started with the Waves going up 1-0 after scoring on their first possession. Shoemaker answered back for UCSB, scoring back-to-back goals to give it a 2-1 lead at the end of the first quarter. Once the Gauchos took the lead, they contained it for the game’s entirety.

Santa Barbara opened up the second period with a goal from junior attacker Mitchell Hamilton. Shoemaker completed a hat trick with just under a minute left in the frame and gave his team a 4-1 halftime lead.

Pepperdine commenced the second half with another strong score, but was countered when sophomore attacker Shane Hauschild scored a deep goal to keep the UCSB lead at a margin of three.

Senior two-meters Liam Gaughan and Nick Jordan extended the lead with goals of their own, making the score 7-2. UCSB would add three more goals to its total while only surrendering one score to take a commanding 10-3 lead in the final frame.

The fourth quarter consisted of a lot of scoring by both teams, but with no doubt of who the winner would be. The Gauchos outscored the Waves 7-5 in the fourth and won 17-8. Scorers in the final frame included Jordan, Hauschild, freshman driver Boris Jovanovic, junior utility Tor Jenson and junior two-meter Anthony Buljan.

The Gauchos end the season on a high note with a two-game winning streak and a nine loss season, their lowest total since 2008. They also end the season with a winning road record of 4-2 for the first time since 2013.

Additionally, UCSB improved upon its underwhelming performance in MPSF play last year in which it did not win a single game. This year, Santa Barbara won four conference games and finished with a winning overall record, something it hadn’t accomplished since 2013.

While each accomplishment is a sign of progression after a frustrating conference finish last year, the Gauchos season is far from over. Their match against Cal will be the fourth meeting between the two squads. The Bears have won each of the previous three matches this season.

Defeating Pepperdine was a great way to end the regular season, but the real season has only just begun for UCSB.

Santa Barbara will face-off against Cal in the quarterfinals of the MPSF Tournament on Friday, Nov. 20th at USC’s Uytengsu Aquatics Center at 1:00 p.m.