The Daily Nexus
News
Professor Singh Speaks on Sikhism at Religious Literacy Series
November 13, 2015 at 5:00 am by Siboney Arias 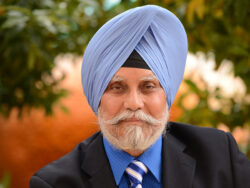 UC Riverside Professor of Sikh and Punjabi Studies Pashaura Singh presented the history of Sikhism through its social and religious evolution at the MultiCultural Center Wednesday as the first speaker of its Religious Literacy series.

MCC Programmer Sepideah Mohsenian-Rahman said the MCC will be hosting the series to educate students on the basics of new faiths and perspectives.

“The religious literary experience at UCSB’s MCC started as a result of some lock-in fees that we acquired, and now it’s this big thing,” Mohsenian-Rahman said. “It’s very important in our programming every quarter to include the ‘AB’s of a faith or work on religious events to expand horizons rooted in issues that might come out of them that our students might feel connected to.”

Mohsenian-Rahman said the series began with a lecture on Sikhism to break down negative stereotypes of the religion.

“It was important for a lot of reasons … to kind of shatter stereotypes and misconceptions of the Sikh community in conjunction with the Muslim community in the United States, where there’s such a heightened Islamophobia targeted at Muslims and people who look like they’re Muslims,” Mohsenian- Rahman said.

Singh began his talk by explaining the core values taught by the religion’s founder, Guru Nanak, who was described by Singh as “looking at the audience, always ready to have a conversation.”

Singh said one of the most notable things Guru Nanak established is the concept of a free canteen within a Sikh religious building called a Langar.

“It is a very powerful institution he created — when you share the food, your ideas … the dining place expands the ideas,” Singh said.

Singh said Sikhism is evolving and effectively entering the mainstream.

“Social media is revolutionary; all communities are changing. It’s not just the Sikhi,” Singh said.

Fourth-year biopsychology major Jagdeep Kaur said he was taught the principles of Sikhism by his family.

“Growing up, my parents taught me a lot of stuff about Sikhism. When I was younger I would go to Sunday school, and they would teach us a lot about Sikhism and the culture,” Kaur said.

Singh said many people, especially youth, find a connection to Sikhism because it teaches that “all human beings are equal.” Second-year communication and history of public policy double-major Jashleen Singh said she enjoys this aspect of Sikhism most.

“He was talking about Langar and how everyone can go into the temple during lunch. Everyone eats together — it doesn’t matter whether you’re homeless,” Jashleen Singh said. “You don’t have to be Indian; you can be any other race and still come in. It’s a very accepting environment and a very accepting religion to have grown up with.”

Attendee Emma Bobro said she came to the event to try to find a faith system she could believe in and discovered how fascinating Sikhism can be.