The Daily Nexus
Water Polo
MPSF Seeding at Stake in Regular Season Finale
November 12, 2015 at 5:02 am by Jorge Mercado 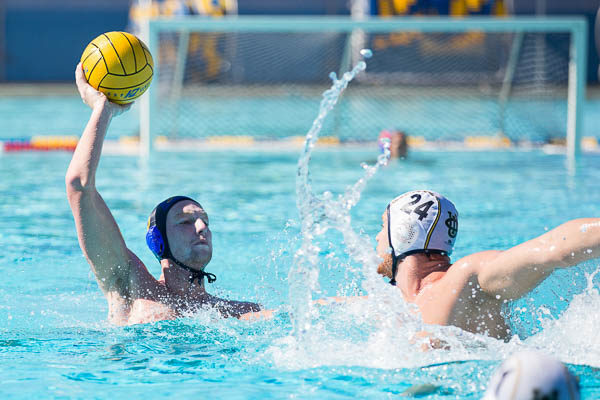 After another solid weekend, the No. 6 UCSB men’s water polo team will look to pick up a victory on the final weekend of the season when it travels to Malibu to take on No. 9 Pepperdine.

“We had another good weekend.” Head Coach Wolf Wigo said. “We feel pretty good about ourselves right now.”

The Gauchos head into their regular season finale with a 15-9 overall record and a 4-5 MPSF record. With a win, Santa Barbara will lock up the sixth seed in the MPSF championships and will avoid double-digit losses for the first time since 2008. Pepperdine hosts UCSB with an overall record of 11-12 and is currently 1-6 in conference play.

If Pepperdine beats UCI on Friday and goes on to beat Santa Barbara by at least two goals, then they will have a good chance of taking the tiebreaker and the sixth seed, making this a crucial game for both teams.

“We are in a really great position.” Senior attacker Derek Shoemaker said. “We feel confident we can get that win and have a good standing for the MPSF tournament.”

These two teams are no strangers, as Saturday’s game will mark the third matchup between them this season. UCSB has been the victor in both meetings, but not by much.

At the NorCal Tournament in September, the Gauchos narrowly defeated the Waves by just one goal in overtime. The two teams met again at Pepperdine just four days later, during which UCSB again came away with a slim victory, this time by two goals.

“Pepperdine will be tough.” Senior goalkeeper Chris Whitelegge said. “We’ve won two games against them already so they will be extra fired up to get one against us.”

No doubt Pepperdine will put up a great fight, as it has in the last two matchups, thanks to freshman Marko Asic. The young utility leads the team in goals scored with 37.

Alongside him is senior attacker Wesley Sherburne, who has 33 goals, three of which he scored against UCSB in the teams’ second matchup. Sophomore goalkeeper Zack Rhodes has also played a key role with his 228 saves on the season.

As the final week approaches, Santa Barbara knows it will be able to count on its four star seniors to lead it to victory. Senior two-meter Liam Gaughan has done big things against the Waves, scoring five goals against them this season. Two-meter Nick Jordan will look to continue with his timely shooting and maintain his shooting percentage of 42.

The Gauchos get help from a lot of players, but the two stars who have led the team all season are (don’t add year and position for these names) Derek Shoemaker and Chris Whitelegge. The team’s leading goal scorer with 39, Shoemaker has scored seven goals against Pepperdine this year.

As for the star goalkeeper, Whitelegge will look to keep moving up in the MPSF record books in career saves. He has played exceptionally well against Pepperdine, registering 28 saves in the two matchups, including a season high 15 in the second match alone.

“They like to shoot,” Whitelegge said. “They are going to fire away and really try to take the game to us. We have to stand against that.”

The final regular season match will have huge significance for the No. 6 team in the country. The Gauchos are in control of their own destiny at this point, a position that every team hopes to be in this late in the season.

“This is where we want to be.” Wigo said. “This was one of the goals coming into the season and we are there now, we just have to play well and everything will work itself out.”

It will be an emotional match for both teams, as a handful of seniors will be playing their final regular season game. The stakes are high with the No. 6 seed in the MPSF Tournament on the line, as seeds 7-10 will have to play a tie-in game to advance to the next round.

Both UCSB and Pepperdine will show why they will be forces to be reckoned with as the MPSF championships quickly approach.

The Gauchos’ final regular season match will be played on Saturday at Pepperdine at 12 p.m.