Shown here is the giant sphinx moth with a fully extended proboscis, or tongue.

Barbara this past week. The giant swallowtail butterfly, Papilio cresphontes, and the giant sphinx moth, Cocytius antaeus, were both spotted recently; this is the first time either of these species has been found in the Santa Barbara area.

The giant swallowtail butterfly is the largest butterfly species in the United States. Spanning nearly six inches, this butterfly usually inhabits southeast areas of the U.S., particularly southeast parts of Arizona. They generally migrate from late May to August and reach the south around October. The butterfly has been gradually spreading its migration westward and has finally found itself in sunny Santa Barbara.

Giant swallowtails generally fly fast and at high altitudes, making them difficult to capture. The females beat their wings slowly but are able to move through the air quickly. Males exhibit the opposite flight pattern: they beat their wings rapidly but tend to move more slowly.

It is likely that the giant swallowtail will take up residence in Santa Barbara because the climate and food present allow it to thrive. Santa Barbara has both orange trees, which are a favorite food source for caterpillars, as well as bougainvillea, a favorite nectar source for adult butterflies. Adult females lay their orange eggs on the host plants; over time, these eggs turn brown. Fourth instar larvae tend to look like big pieces of excrement on the plant. This is a form of camouflage and a tactic to keep predators from eating them. Caterpillars, also called “orange dogs”, that thrive in citrus orchards are considered to be pests. 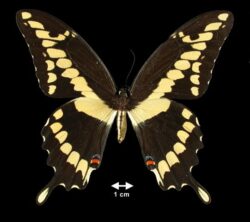 The giant swallowtail butterfly has a wingspan measuring 4 – 6.25 centimeters.

In addition to the swallowtails, two giant sphinx moths were also spotted in downtown Santa Barbara. This species spans over 5 ½ inches in length and is one of the largest found in North America. It is the only moth in the world that can pollinate the Ghost Orchid due to its long proboscis.

The second record of the moth was cited shortly after the first occurrence. Matthew Gimmel, Curator of Entomology at the Santa Barbara Museum of Natural History, explained how this reveals a possibility that the moth migrated to Santa Barbara last year.

“This additional specimen was also virtually perfect – no lost appendages or tattered wings, just as the first specimen – strongly suggesting that it grew up locally,” Gimmel said. “Its caterpillar’s favored plant is custard-apple (Annona), which is known to grow in our area. There is a chance that perhaps one female made it to our area last year full of eggs, and what we are seeing this year are her progeny. Whether they will survive here more generations is anyone’s guess.

It is highly unusual that this moth was found in California, as it is a regular inhabitant of Central and South America as well as Florida; this is the first time in history that this moth has been found in California. However, they are strong fliers and have been found as far north as Chicago and commonly stray to Texas and Arizona. It is believed that the giant sphinx moth will not remain in the area.

Now the question is: why is it that these species are suddenly appearing in Santa Barbara? Gimmel stated that there are no definitive answers and attributing this to climate change would be speculative.

“In my opinion, it would be pure speculation to attribute these occurrences to either El Niño or climate change. In the case of the giant swallowtail, it is clear that the species has been gradually expanding across California–from the Colorado River, across the desert, into the Central Valley, and along the coast through LA and Ventura–for decades now,” Gimmel said.

Both species have been deposited in the insect collection of the Santa Barbara Museum of Natural History.

A version of this story appeared on p. 18 of the Thursday, Nov. 12 print edition of the Daily Nexus.