Close to a ton of rock and soil fell onto the beach after eroding from the cliff side above 6709 Del Playa Drive early Monday afternoon, leaving no individuals injured.

The rock fall was discovered by the tenants of the house several hours after it occurred. Erosion is a continual problem for ocean-side Del Playa homeowners due to the dual forces of wave action and rainfall, which undercut numerous balconies and house foundations. The soft sedimentary shale which makes up the cliffs loses an average of 6 inches to a foot each year. This continuous erosion led to the loss of a bike path that used to run behind properties along the Del Playa cliff front.

The County Building and Safety Division created the Bluff Erosion Monitoring Program 10 years ago to monitor erosion and to ensure the safety of I.V. residents. The program responds to cliff erosion, especially after storms, and requires land owners to take specific actions after the cliffs come within 15 and 10 feet of their properties such as creating a plan to move the homes or repair the cliffs. When erosion leaves less than 5 feet between the cliffs and a home, the Division issues an order to vacate the building and homeowners must rebuild the property so it no longer lies within the danger zone.

Although the recent erosion at 6709 was larger than the typical small falls which occur throughout the year, the house is in no immediate danger since it lies farther away than the 15-foot minimum for active action. The owner of the affected property, Del Playa Rentals, sent repairmen to the house Wednesday to shore up the cliff with netting and move the cliff fence farther away from the edge.

Carlos Godinez, a worker with Gil’s Landscaping currently supervising the property repairs, said his company uses a combination of coconut mesh and tarps to help property owners slow the pace of their cliffs’ erosion.

“One of the things we’re doing is we’re putting coconut mesh,” Godinez said. “What we do is we cover the entire hill, we put a couple staples and nails with washers and it keeps it in place, and above the coconut mesh we put a massive tarp and that helps prevent the erosion; we generally change it every year.”

Second-year biology major Nairi Rostomian, a resident at 6709 Del Playa, said she did not hear anything when the cliff fell and only discovered it hours later when she went on her balcony to watch the sunset. 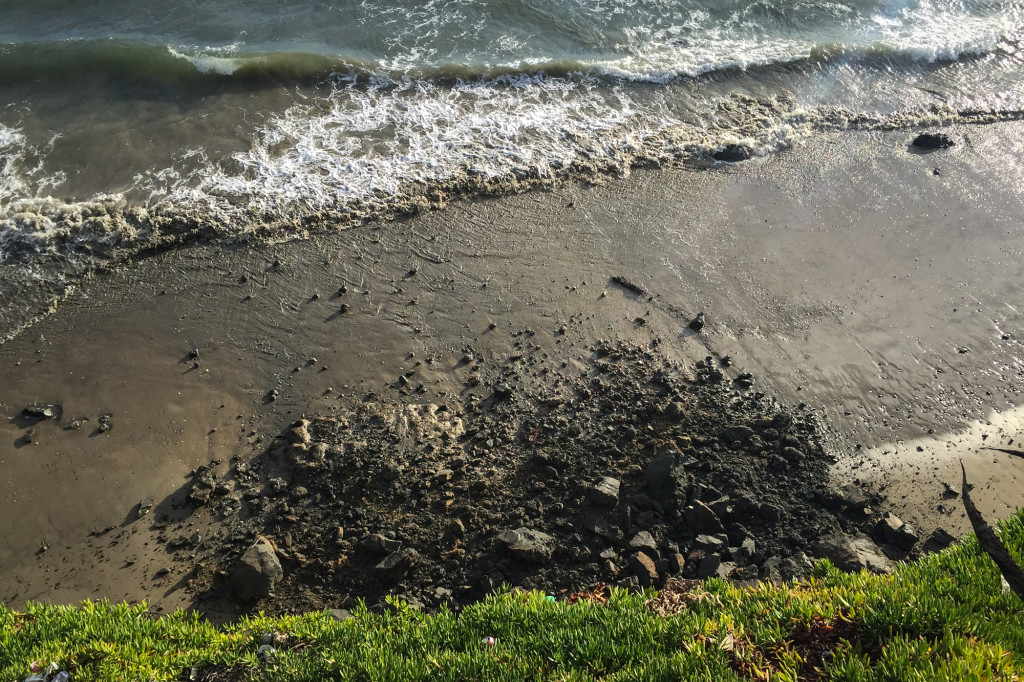 “I went outside since it was almost time for the sun to set and I wanted to watch it, and our neighbors were out, too, and they said, ‘Don’t go too close since the cliff fell,’” Rostomian said. “It could have been really bad if someone was standing there when it happened or was below it.”

Luke Weller, a recent graduate of the University of Kent in Canterbury, England, said he is visiting I.V. and witnessed a similar, smaller rock fall on the 67 block of Del Playa a week earlier.

“We were just getting out from paddle boarding,” Weller said. “It wasn’t huge but I reckon that that amount of rubble could hurt someone badly, at least if it hit them on the head.”

Owner of Del Playa Rentals James Gelb said the erosion is a constant problem for all ocean side land owners. According to Gelb, his company has made “12 cutbacks of the cliffs since June” and the 6709 erosion will be numbers “13 and 14.”

“I’m not waiting until the cliffs are 5 feet from the building — that’s just dumb,” Gelb said. “It makes a lot more sense to change the houses into something nice; you catch a lot more people with honey than with vinegar, if you know what I mean.”

Gelb said he is concerned for the safety of residents and beachgoers when it comes to the cliff erosion.

“Due to the overhang, if rocks fall off the face it can be dangerous for those sitting under,” Gelb said. “I caught someone at 6709 sitting right under a 300-pound boulder right after the cliff fell, and I warned them.”

Gelb said he works closely with the County Building and Safety Division on cliff safety issues. Gelb also said he plans to voluntarily redesign his properties at 6647 and 6649 Del Playa Drive this coming summer to ensure they are a safe distance from the cliff.

“The building department is my friend. When I call them they talk to me and they’re very responsive,” Gelb said. “I just believe in doing it proactively rather than waiting until you’re 5 feet away from the cliffs.”

A version of this story appeared on p. 6 of the Thursday, Nov. 12, issue of the Daily Nexus.