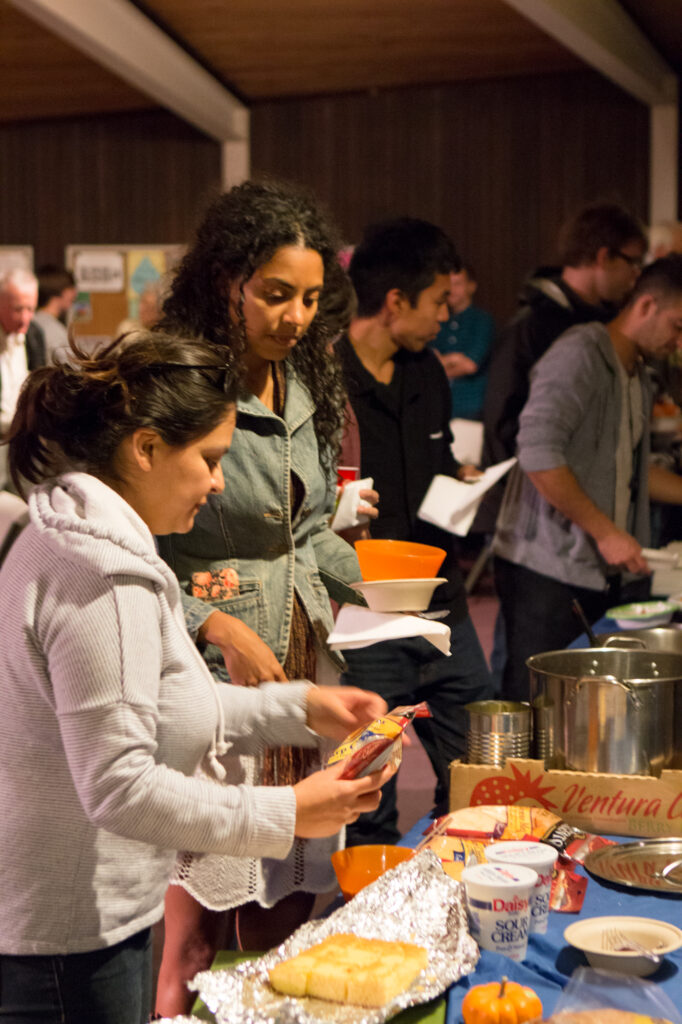 People picking up food from the free buffet set out by the church. Stephen Manga/Daily Nexus

Responding to a string of vandalism and theft at St. Michael’s University Church, allegedly due to its backing of the Black Lives Matter movement, nearly 100 students, professors and Isla Vista residents attended a free dinner Tuesday at the church to show their support.

An unknown vandal shattered the church’s glass front door in September by firing small projectiles at the church, and the church’s Black Lives Matter signs have been repeatedly stolen and torn apart. The “Free Dinner in Solidarity with #BlackLivesMatter” was organized by the Rev. Scott Claassen and members of the Progressive Christians group which includes pastors from multiple Santa Barbara churches. The gathering served to show continued support for the movement and allow people of various backgrounds to share their perspectives and fears. 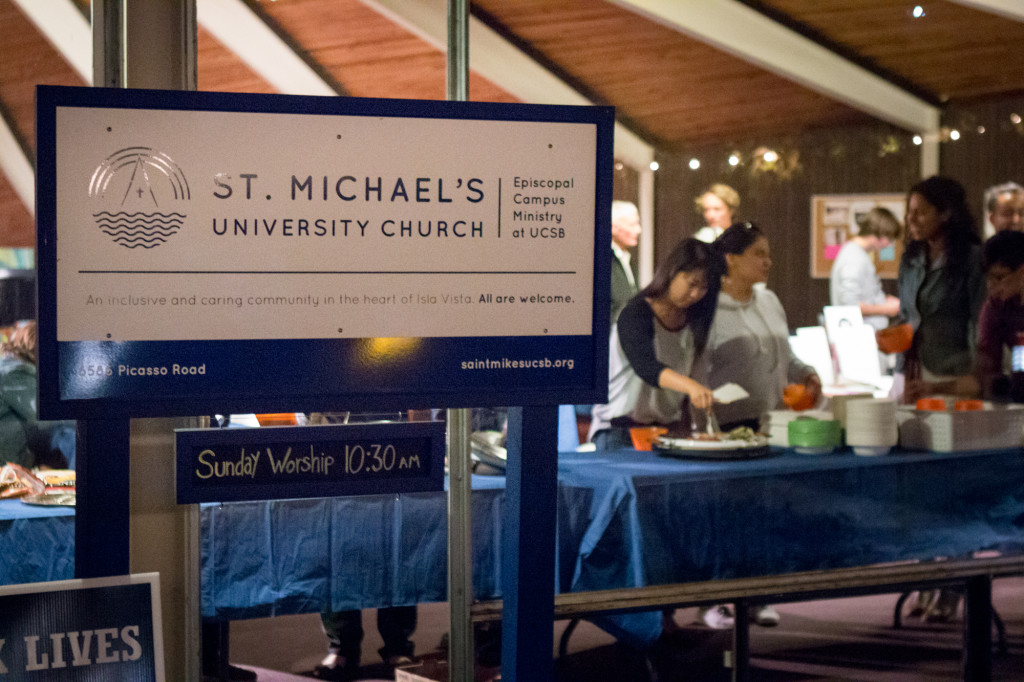 In light of the vandalism at St. Michael’s church, the Episcopal Campus Ministry held a free dinner and open mic for the Isla Vista community. Stephen Manga/Daily Nexus

“What we do know from this position that we’ve been thrust into is that somewhere in Isla Vista, someone is acting violently in response to what I think is a very simple statement: black lives matter,” Claassen said.

Claassen, who assumed his post at the church in early October, said there were shards of glass on the ground when he arrived at St. Michael’s days after the incident.

“Frankly, I thought maybe just some kids got drunk and something like that happened, but on further inspection, it was clear that where the door had been shot out was directly by the sign that was posted, the Black Lives Matter sign,” Claassen said.

Claassen said support for his theory began to increase when the signs were again stolen later that week.

“Two more times after setting out the signs, we had them torn apart, had them stolen, and it was just obvious that this is an issue that is alive and well right here in Isla Vista,” Claassen said. 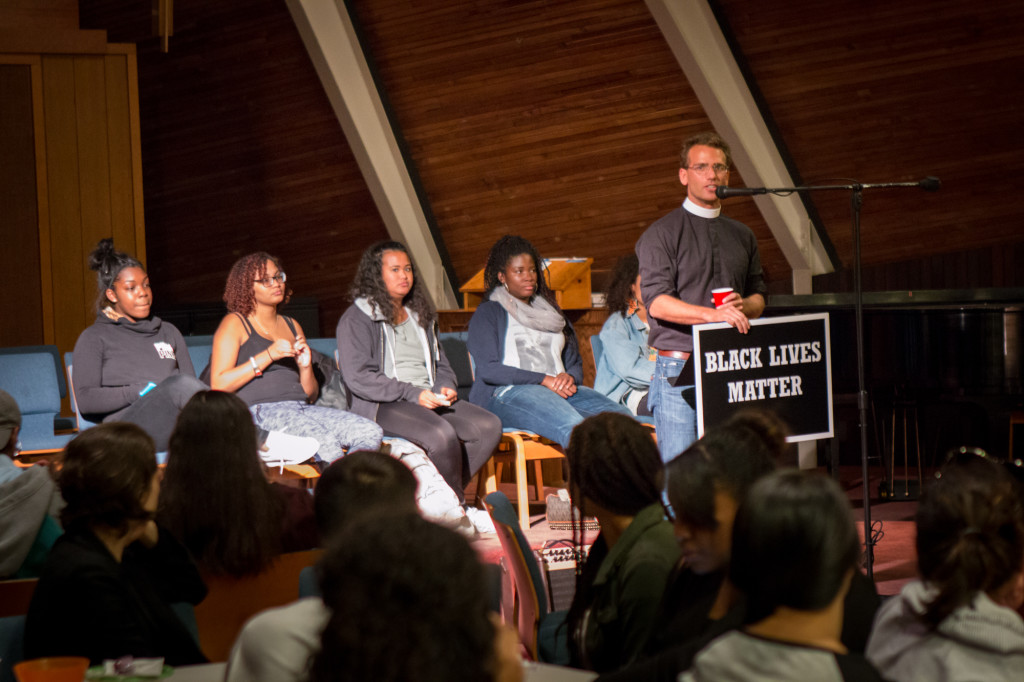 After viewing pictures of the door and learning no bullets were recovered from the scene, Claassen, who said he grew up around guns, said the projectiles were probably pellets rather than bullets.

“It was probably either a pellet or BB gun,” Claassen said. “Those of us who are familiar with guns also know that it could be a pellet from a shotgun. It’s hard to tell.”

Santa Barbara Sheriff’s Department public information officer Kelly Hoover said the police had no leads to follow in the case.

“There were no witnesses that we are aware of and there was no evidence at the scene that deputies were able to use to track down a suspect or suspects,” Hoover said in an email. 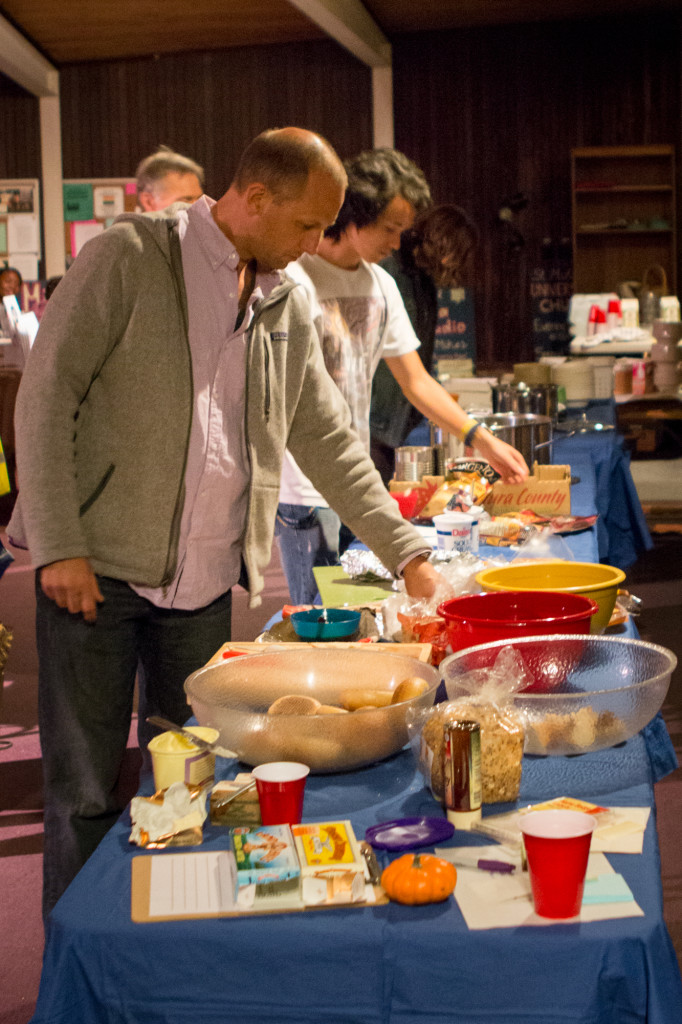 People picking up food from the free buffet set out by the church. Stephen Manga/Daily Nexus

Claassen said he would like to speak to the vandal privately and understand his or her motives.

As students and I.V. residents filtered into the church on Tuesday, Pastor Ronald Cox of Goleta’s Christ Lutheran Church blessed the meal.

Attendees used a microphone on the pulpit to convey criticisms of national and local race issues and share their personal experiences of being students of color at UCSB.

Member of UCSB’s Black Student Union (BSU) and first-year biology major Bianca Graves said it is important for students to embrace races and cultures other than their own.

“We should not have a colorblind society because that’s just not practical,” Graves said. “When I walk into a room, my blackness is obvious, especially in the S.T.E.M. field which is male-dominated and white-dominated.” 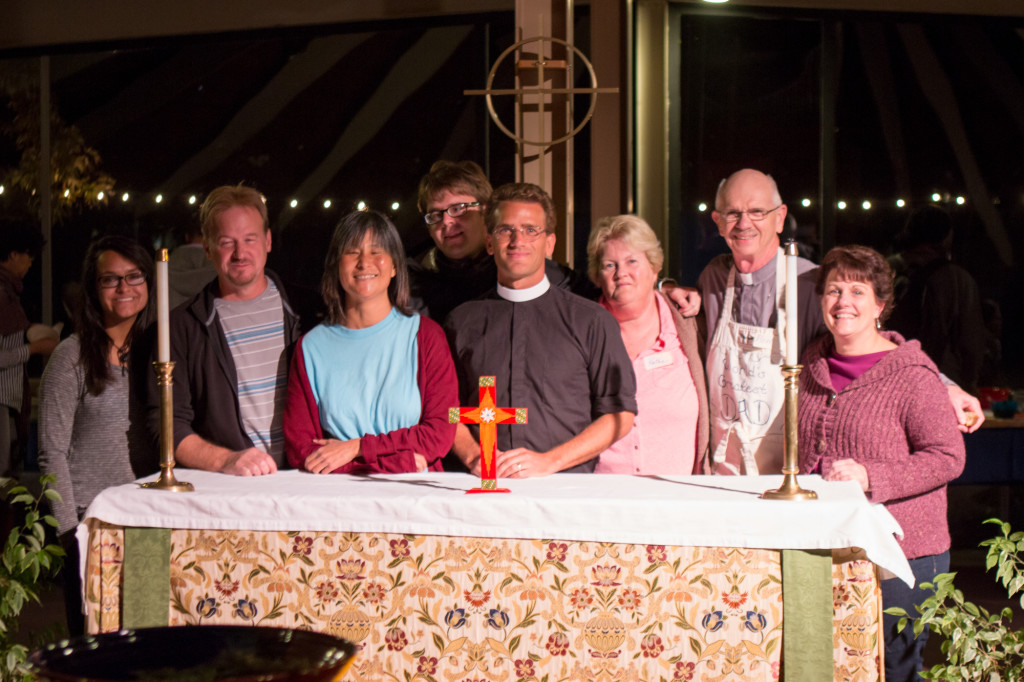 Reverend Scott Claassen (center) and the volunteers who helped to organize the event. Stephen Manga/Daily Nexus

“We have a real lack of moral, ethical and analytical ability,” White said. “Many of our students in our elementary schools are taught with rose-colored glasses and dumbed down . . . they don’t understand the real history of the United States.”

White said it is important for faculty to show support for student movements.

“This is many students’ first foray into resistance and I need to support that,” White said. “It’s about having an ethical conversation around resisting anti-blackness.”

“When you say ‘all lives matter,’ you can say that, and yes that’s true, but it’s the fact that my black body is threatened just because it’s black,” Westbrook said. “All lives are not being targeted — colored people’s lives are being targeted.”

As members of the church began to clean up Woodstock’s Pizza boxes, Cox explained the importance of Tuesday’s dinner outside the church, pausing to shake the hand of a fourth-year UCSB student he had just met.

Third-year art history major Abraham Lizama said there is a disconnect between Isla Vista’s perceived diversity and its actual representation of students of color.

“As a resident of this community for my entire life, I’ve seen a lot change,” Lizama said. “How democratic, liberal and diverse this community claims to be, it’s just a façade. Tonight, go back home, see the community as it is, not as you think it is.”