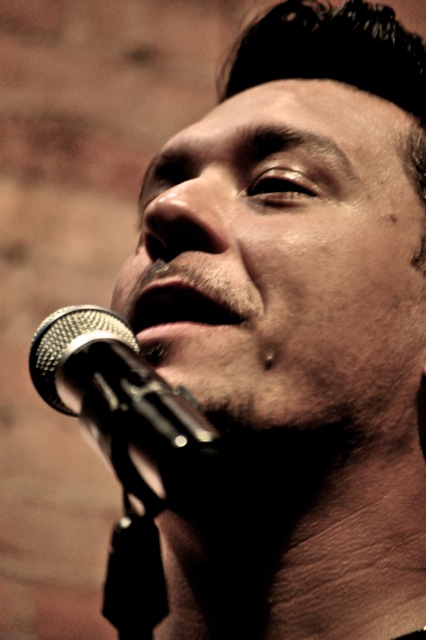 It’s unsurprising that 2015 Doris Duke Award recipient Paul S. Flores managed to garner a decent turnout for his evening of spoken word, hosted by the UCSB MultiCultural Center on Friday Nov. 5. The choice of Reds Bin 211 in downtown Santa Barbara’s “Funk Zone” for the venue turned out to be an apt one, since it was big enough to hold the crowd but small enough to be intimate, despite some issues with disruptive patrons.

Flores walked on to Amy Winehouse’s “Stronger Than Me” and was bombastic and personable from the start. Throughout the evening he joked with both the DJ and audience members between poems and, even during more serious pieces, his energy never waned. As a San Francisco native, his passion for both his city and his half-Cuban, half-Mexican heritage motivated some of his best performances of the night. Eager to please, he apologised self-consciously for being too political or “a downer” whenever his poetry touched on raw subjects, yet it was in these moments that his performance was most powerful and garnered the biggest response from the audience.

He opened effectively with “Spanglish,” a poem that alternated between rapid-fire Spanish and English to demonstrate the experience of having a transnational identity in what he described as a “multicultural but monolingual” U.S. While the poem was an excellent demonstration of his enduring connection to Chicano culture and his confidence as a spoken word artist, at points during this poem and the evening his delivery felt too studied and close to resembling a generic “Spoken Word voice”. However, these moments were brief and the potency and sincerity of the message behind his poems were more than enough to compensate.

“Spanglish” was followed by two more muted and personal poems. The first concerned Flores’ determination to avoid repeating his father’s mistakes in his relationship with his own son. The poem was a moving depiction both of Flores’ personal vulnerabilities and the toxic effect of hyper-masculinity on male relationships in general and was far superior to the love poem that followed. This second poem, based on an Aztec poetry form, occasionally edged into trite imagery and involved a minor overuse of repetition common to a few of his later poems.

Noting that he loves spoken word because “it gives you the opportunity to say what you need to say,” Flores then changed the tone completely with his angry but humorous poem to Donald Trump. This revenge fantasy of sorts that imagined Trump meeting fugitive Mexican drug lord “El Chapo.” He continued to gain momentum after this point and followed with a poem that celebrated the historical alliance between “black and brown,” which presented historical fact with a passion that was infectious and expressed his disappointment at how this coalition is supressed in the name of financial interest.

Flores saved his best poem, a rant against gentrification in San Francisco’s Mission called “Crowbar Thing,” until almost the end of the evening. Inspired by an incident in which a bar owner beat three Mexican men with a crowbar for hanging around his establishment, the poem moved from the humorous, lampooning the “googlefucks” looking for somewhere ethnic enough to be trendy, to the tragic with ease.

The evening finished more light-heartedly with the recipe poem “Arroz Con Pollo,” a rapturous celebration of Mexican food and how it brings people together, as well as a poem toasting the excellence of San Francisco city, an uplifting counterpart to the bitterness of “Crowbar Thing.” This return to the joyfulness and exuberance of “Spanglish” seemed crucial to his message of the endurance of oppressed peoples through hardship and injustice and also served to end the evening on a more positive note.

Overall, Flores’ performance demonstrated clearly why he deserved to be named San Francisco Weekly’s “Best Politically Active Hip-Hop Performance Artist.” While he is at his most effective as a performer when incensed, he is not content to merely point out social problems and his poetry was always as hopeful as it was angry.