The Daily Nexus
Film & TV
7 Nicolas Cage Films That Everyone Needs to See
November 10, 2015 at 5:00 am by Natalie Noblett 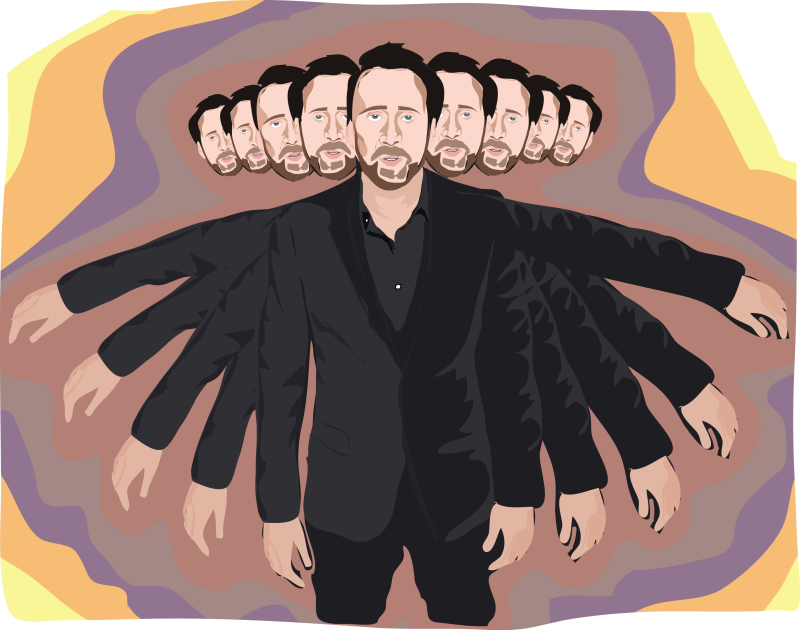 Since the start of his career, Nicolas Cage has refused to be typecast. He takes on countless roles that challenge him as an actor, and pushes his skills to the extreme. Over the years, many have considered this to be “over-acting.” What many don’t realize, however, is that Nicolas Cage may just happen to be the most talented actor in Hollywood. Below are some of the optimum films that showcase his versatility and pure gift as an actor.

Ah, one of his finest films. If the title didn’t give it away already, the answer is yes, in fact, Nic Cage does play a vampire. And yes, he has fangs. And yes, he is afraid of the sun. Quite possibly the best part of this film, however, is the fact that Nic Cage only believes that he is becoming a vampire after an encounter with a suspicious woman. It is all a delusion. Whilst coping with these delusions, Nic grows frustrated with his assistant, Alva. He gets so frustrated; in fact, that he feels compelled to angrily recite the alphabet. All the way from A to Z, Nicolas Cage shines in Vampire’s Kiss.

John Travolta and Nic Cage switch faces. That’s right. Again, the title is not misleading in the slightest. Faces are removed, exchanged, and then all hell breaks loose. John Travolta plays an FBI agent who is attempting to prevent a terrorist attack, which is led by Nicolas Cage. When Travolta manages to knock Nic Cage out cold (trust me, it’s a long story), he realizes that the only natural conclusion to stop the attack is to switch faces. Obvious, right? The bloodless, seamless facial procedure feels all too similar to peeling the sticker off of a piece of fruit. Nic Cage eventually wakes up and realizes that he has a new face. And then, there’s the “all hell breaks loose” part. By taking on two roles in this film, Nicolas Cage truly justifies that he really can play any part.

We’ve all heard it before: “NOT THE BEES!” This film is unique in comparison to Nicolas’s other works, because its eccentricity quickly made it a cult classic. Cage plays a sheriff in the film, who is sent to an island to investigate the case of a missing girl. What he finds, however, is a female-based Pagan cult. Wicker Man brings a lot of interesting elements to the table. For example, Nicolas Cage punches a woman in the face, inquires about a burnt wicker doll (“How’d it get burned?? HOW’D IT GET BURNED?”), and is tortured by pagans…with bees.

Ever heard of the film Taken? Liam Neeson tries to find his daughter for a couple hours, only for her to be kidnapped two more times. Well, that’s what this is — but with Nicolas Cage. His daughter has been kidnapped, there are large sums of money involved, and there’s an abundantly emphasized deadline. Intermixed with the mysterious “We have your daughter” phone calls are a lot of frantic, hysterical Nicolas Cage moments. But of course, how could I forget the fight scene between Nic Cage and the kidnapper in which both parties end up catching fire? The scene is set to the 1969 Rolling Stones classic, “Gimme Shelter.”

There aren’t a lot of people I would rather have lead me on a treasure hunt than Nicolas Cage. He has the perfect “Guys, I think I found something!” face. Who wouldn’t want to explore with that? The mere fact that his character’s name in the film is Benjamin Franklin Gates is terrific. In National Treasure, Nic Cage is curious, inquisitive, and kind enough to bring us along on his quest.

Nic Cage as a central love interest is already intriguing, but as Cher’s central love interest? Perfect. In this film, he plays the alluring brother of Cher’s soon-to-be husband. And he nails an Italian (or possibly a Brooklyn) accent. Nic Cage is definitely desirable as a brooding baker in Moonstruck.

This is the movie that founded Nicolas Cage’s long, eclectic career. For that reason, a “thank you” is definitely necessary. It is responsible for his growth as an actor and his ability to perpetually improve his skill. This is also the film where Nic Cage showcased his ability to maintain a really convincing accent. He plays a rough guy from the city that meets a girl from the valley, but he finds that he can’t shake his rough ways. Amongst the superfluous amounts of valley-girl slang and bad boy allure is a young, blossoming Nicolas Cage.