The Daily Nexus
Swim and Dive
Men’s and Women’s Swim Both Victorious Over UCSD at Home
November 9, 2015 at 5:00 am by Daniel Moebus-Bowles 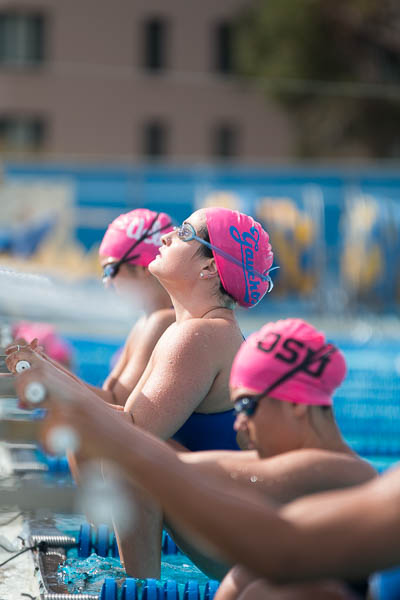 This past Saturday the UCSB men’s and women’s swim teams competed alongside one another for the first time at Campus Pool this season. Taking on the visiting Tritons of UC San Diego, both Gaucho teams emerged victorious with the men winning by a margin of 142.5-111.5 and the women taking a 139-115 win.

With this the women’s team improves to 3-1 on the year in dual meets and the men notch their first meet in the win column, moving to 1-2.

The women’s team put up another convincing victory this weekend, showing off its depth on the roster. To open up the meet, the Gauchos took first and second place on the first event of the day, the 220-yard medley relay.

Santa Barbara’s ‘A’ team easily took first place, coming in at an overall time of 1.43.71, four seconds faster than the first Triton team. This notched the third straight meet in which the same team of junior Cheyenne Low, freshman Rachel Kulik, senior Katie Records and senior Lauren Vosseler have taken first in this event this season.

Edging out the ‘A’ team from San Diego, the Gauchos’ ‘B’ team took second place in the event to give UCSB the top two spots and a combined 15 points from this race alone. The team came in at 1:47.19, just under 0.2 seconds faster than the Tritons.

The women were not done flaunting their depth with this race as they put in an even more dominating performance in the 200-yard freestyle event. Junior Kelsey Leonard took gold in this race coming in at a time of 1:51.91. Following her were three more Gauchos to give their team the top four spots in the event. Low, senior Hollace Barden, and senior Hope Curran took the next three spots coming in within the next five seconds after Leonard. Santa Barbara gained an additional 16 points from this event alone.

On the men’s side, the Gauchos started off on a similar note, winning the 200-yard medley as well. Coming in at a time of 1:33.46, Santa Barbara’s ‘A’ team just edged out San Diego for the top spot. Sophomore Billy Mullis took the best split in the backstroke at 24.20, and sophomore Kevin Mendoza topped the butterfly split at 22.44.

Mullis was not done after the relays as he then helped his team to its first win with his individual success. He added two individual wins for the Gauchos in the 200-yard freestyle, with a time of 1:40.20, and in the 200-yard backstroke, 1:50.03.

“These upcoming weeks are going to be very important for us,” Head Coach Gregg Wilson said. “We have a couple of big meets to get us ready for the rest of the duel meet season.”

The Gauchos will be back in the pool for the A3 Invitational on Thursday, Nov. 19. The meet will take place in San Diego, California.