The Daily Nexus
News
Environmental Litigator Gives Talk on Fracking, Calls for Heavy Regulation
November 9, 2015 at 5:00 am by Madison Willard 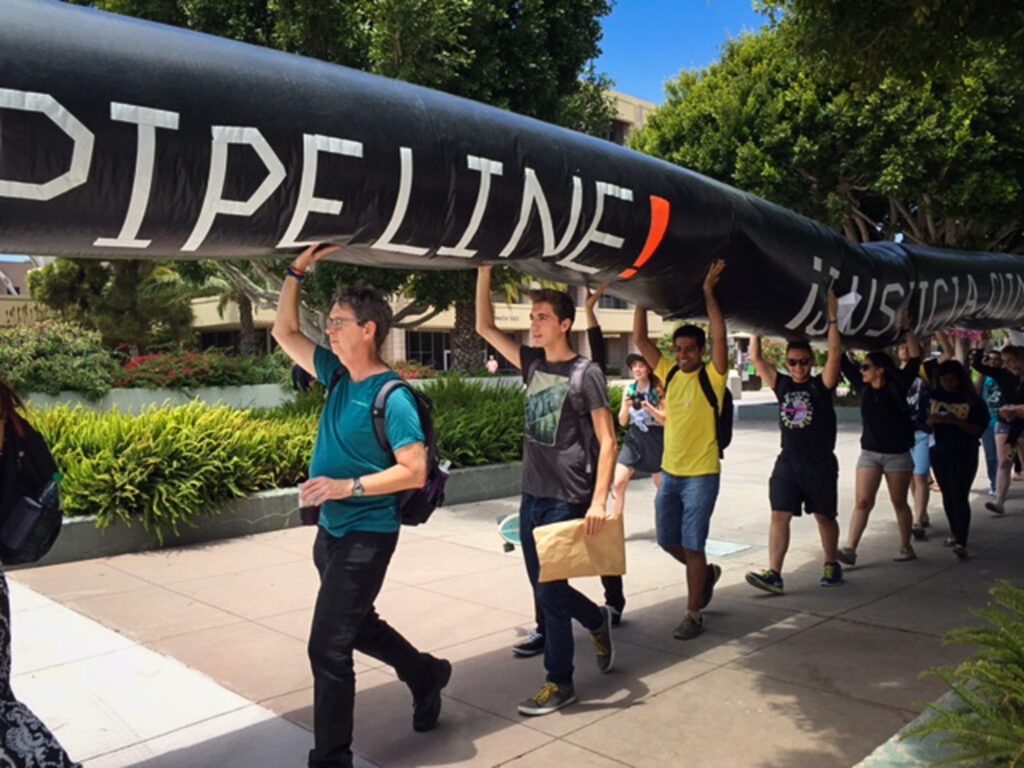 Fracking is an energy sourcing method that involves drilling vertically then horizontally, then pumping in water, sand, and chemicals at high pressure to release oil and natural gas. Squillace proposed that with diligent, reliable federal regulation and environmental planning, fracking can continue with little effect on the environment and surrounding communities while maintaining a profit.

According to Squillace, fracking should only continue if the industry implements serious reform.

“I’m not one who comes in and says we shouldn’t have oil and gas development in the United States anymore. I don’t believe that, partly because, for better or worse, I still drive a car – I’m still using oil and gas,” Squillace said. “There are things that we do that contribute to the problem, but we could do a lot better.”

Squillace said according to the Energy Information Administration, the United States will be energy independent by 2035, largely due to energy sourced from fracking.

“We’re gonna basically be self-sufficient by 2035 … that’s the message from the EIA,” Squillace said. “A lot of this is coming from shale production. It’s grown from about two percent of our gas in 2001 to about 30 percent of our U.S. production.”

Squillace showed an aerial view of densely packed fracking well pads in Wyoming and said a lack of spatial planning is a cause of many problems in the area.

“Let’s limit the horizontal drilling length to two miles, for this example, although in practice horizontal drills can be up to five miles long,” Squillace said. “That means you could probably space your well pads four miles apart. Which seems like a pretty decent distance. But that’s not even close to what’s happening. This goes on for miles.”

Squillace said if fracking development was slowed down and federally regulated as “phased development,” it would be universally beneficial, but acknowledged the difficulty of this plan due to the interests of private companies.

“When you go into one of these heavily-developed areas, it’s a madhouse … there’s a total lack of forethought on how they’re going to engage in this stuff. I’d argue that not only does it benefit the environment, but the economy as well, because it reduces the boom-and-bust nature of this development,” Squillace said. “But that’s a hard argument to make, because most private developers don’t like the government telling them where and when they can put their well pads.”

According Squillace, the public perception of fracking will not improve until the industry addresses concerns over wastewater, air and water pollution and community disruption.

“A lot of this stuff can be addressed, and we really should be doing more to address it. Lots more monitoring, pre-drilling assessment, testing groundwater, making sure that if it changes, we know why,” Squillace said. “Good management, monitoring, casing practices, pressure tests – all that can be done.”

Squillace said the public misconception of fracking stems from self-interested private companies not accepting responsibility for problems like air pollution and water contamination.

“It’s partly because there’s a lot of uncertainty, and I think the industry has been able to play that uncertainty in a way that the public doesn’t fully understand,” Squillace said. “In the face of uncertainty, how do you deal with that? Do you just tell these communities where people are suffering, ‘It can’t be from fracking. It must be from something else.’ That kind of PR. I think that’s the real problem here. We need to do more than just PR, in terms of managing the problems.”

Squillace said future change to healthier fracking practices will be difficult, but not impossible, and the Environmental Protection Agency (EPA) is currently making efforts to reform the industry.

“The EPA is now in the process of issuing regulations – they’ve proposed some rules that will deal with problems like air pollution, and I think the proposal looks pretty good,” Squillace said. “They’re getting a lot of pushback from the industry, but it’ll be interesting to see how far they’re willing to go. There are lots of things we can do, and it won’t be easy … but it can be done.”

“I don’t think I’ve ever been part of a discussion on fracking that focused on how to effectively regulate the industry while still allowing it to operate,” Silver-Westrick said. “I think that’s a really interesting and important take, because it’s probably pretty unlikely that every state is going to decide to ban fracking. And so, the next step there is to figure out how to work within the industry to minimize environmental impacts and also allow them to maintain their profits.”

“I think his background gives him a lot more credibility, too – the fact that he deals with these issues legally and clearly wants development to continue, and that it can be good for communities, but also thinking about the way to cut adverse impacts,” Antonelli said.

Antonelli said she’s interested in when and how changes, such as Squillace proposals, will be enacted in the fracking industry.

“His suggestion for how to minimize the negative effects of fracking, I think, makes sense, and I’m gonna be curious if that’s ever something they act on,” Antonelli said.

Second-year graduate student of environmental science and management Ian Bell said reform can lead to a compromise that benefits all.

“I don’t think I would call for a prohibition on [fracking],” Bell said. “I think it’s just a matter of how do you do it in the most sustainable, environmentally sensitive way.”

Regulations protecting public health and safety are not luxuries. Since he acknowledges that the industry is not adequately regulated, he should be demanding an immediate moratorium to prevent further harm to health, safety, air, water, habitats and the climate.