The Daily Nexus
News
Ex-Policy Adviser Dinesh D’Souza Gives Talk on ‘Is the American Dream Dead’
November 6, 2015 at 5:00 am by Jennifer Redfern 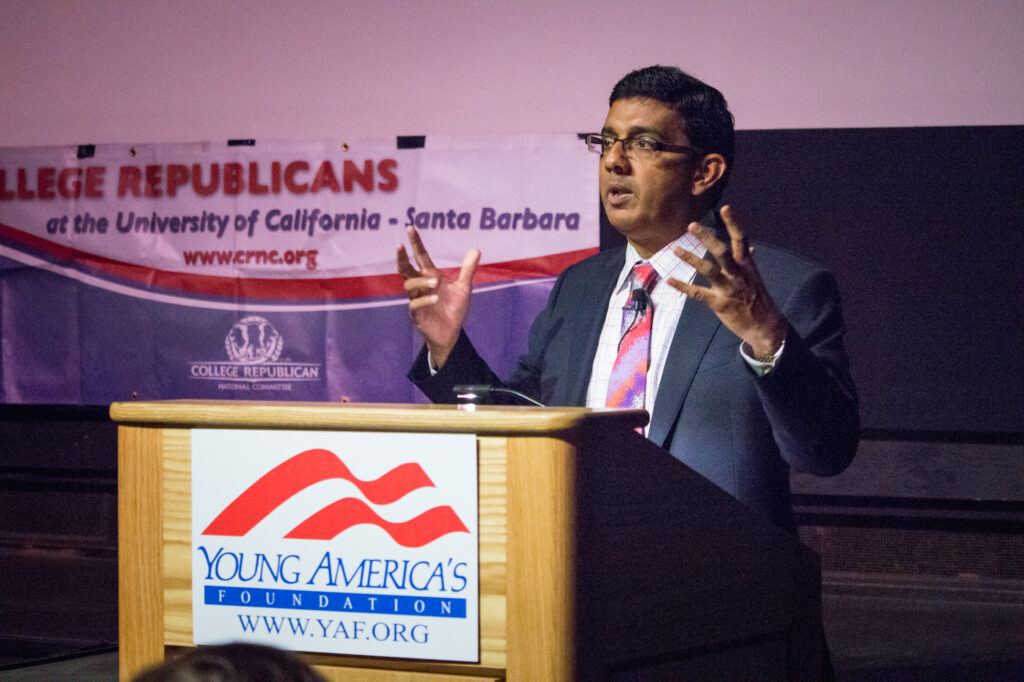 D’Souza, who served as a policy adviser to President Ronald Reagan between 1987 and 1988, spoke about the future of the Republican Party and discussed his Indian heritage as well as his time in jail for campaign-finance fraud. D’Souza also defended traditional Republican values and encouraged Americans to utilize their “unused power.” Nearly every seat was filled, forcing some to stand in the back of the theater.

“I’m going to be talking about what’s great about America, but it’s not actually what I thought was great about America,” D’Souza said. “I’m also going to talk about things that are messed up … and twisted in America, things that have become so serious that they have forced every American to consider the basis of their patriotism as I have been forced to consider the basis of mine.”

D’Souza said justice is the most important conservative political value.

“It seems to me that the reasons conservatives and republicans have been doing so poorly in American politics is that they have lost sight of the most important political value — justice,” D’Souza said. “No conservatism is viable in the future if it doesn’t contend the issue of justice on its own terms.”

D’Souza said he does not understand why more Americans do not vote for Republican candidates.

“Plain-spoken conservatism is enormously appealing,” D’Souza said. “I don’t understand why Asian-Americans aren’t voting 90 percent Republican and Hispanics above 70 percent and African-Americans at least 50 [percent]. This for me is a completely viable goal.”

D’Souza said the media is a massive benefactor to the Democratic Party and liberals’ involvement with the “cultural front” is a major reason for their political success.

D’souza said he is positive a Republican candidate would have a chance at winning the presidency in the 2016 election.

“The Republicans should do extremely well next year because this has been a rather long eight years and there is a weariness that has set in — a discontent,” D’Souza said.

“I thought it was a really good and eye-opening speech,” Garcia said. “I agreed with most of what he said in that he believes that Republicans are being washed out because we choose not to utilize our capabilities to fight back on liberal ideology.”

First-year communication major Zoe Jones said although she is not a republican, she was interested in hearing a different political perspective from D’Souza.

“It was interesting to hear things through a different lens because it’s so different to what I’m used to,” Jones said. “I feel like to be well-rounded people, we need to see things from different perspectives, so I agreed with his comments about the one-sided media in the USA.”

Executive Director of UCSB College Republicans Ron Papile said he was pleased with the success of D’Souza’s speech and said he provided a “refreshing” perspective.

“He did a really good job and was very well prepared, particularly when answering questions,” Papile said. “I like that he included his own personal experience as a jumping point. It was a very interesting take, especially as an immigrant experiencing the American dream.”

Secretary of UCSB College Republicans Eric Lendrum said it was a relief to finally host the event after delays due to D’Souza’s prison sentence.

“We could not have been more proud with what happened,” Lendrum said. “It was an incredible turnout, better than anything we could have hoped for.”

Papile said the event was meant to start a discussion between people with differing beliefs.

“We love to have public discourse, and we want to open up a dialogue,” Papile said. “We want to reach out, especially to organizations with different opinions so we can draw people in. It becomes less of a partisan crowd, and we get tangible results.”