The Daily Nexus
Sports
Gauchos Head into Postseason with No. 2 Seed
November 5, 2015 at 5:03 am by Elliot Thornton 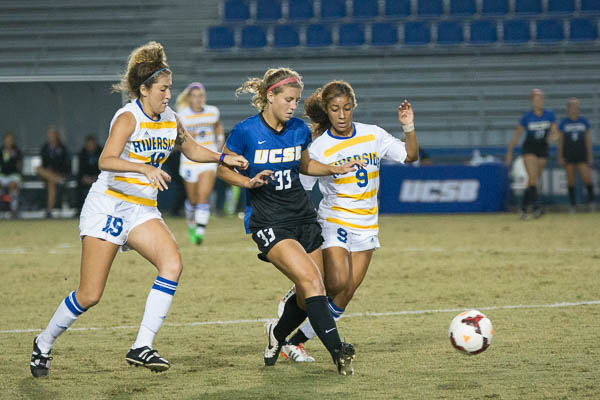 The UCSB women’s soccer team snagged a late 1-0 victory at Cal State Fullerton last Thursday. This week, the two teams will go to battle against the Titans on Thursday in a rematch with much higher stakes: the Big West Tournament.

“We now know why they are 6-2 in conference,” Head Coach Paul Stumpf said. “[Fullerton] is very organized defensively and are dynamic in the attack which is something we have to look out for.”

UCSB finished as the Tri-Big West Conference Regular Season Champions with Fullerton and Long Beach. Each team concluded its conference schedule with a 6-2 record and a total 18 points.

The Gauchos are coming off a demanding week in which they played in two senior night matches against Fullerton and Cal State Northridge. After pulling off the upset Thursday night against the Titans, the Matadors made sure to spoil Santa Barbara’s five-game winning streak with a 4-3 overtime win off a penalty kick from junior midfielder Kourtney Kutscher.

“It’s good to know the team’s characters are intact [from this loss], they will fight to the end and they can score three goals in eleven minutes if the conditions are right. There definitely were some good lessons to take from [this weekend],” Stumpf said.

Despite a one-game skid, the Gauchos have finished their season strong, winning seven of their last nine matches. Helping guide his team to its third regular season title with an overall record of 13-5-1, Stumpf claimed his second Big West Coach of the Year Award.
Stumpf’s coaching and ability to pull out late-game victories has paid dividends for the team as UCSB will see its first Big West Tournament appearance since 2009. Santa Barbara is 3-3-3 overall in the conference tournament, having its previous postseason match against Cal Poly end in a 1-1 tie.

UCSB is welcomed back to the tournament with the tough task of trying to contain the 2015-16 Big West Offensive Player of the year in Fullerton’s Rebecca Wilson. The redshirt senior forward has carried her team all season long, scoring 18 goals on the year, the most of any Big West player this season.

Wilson led Fullerton past Cal Poly on the road last Sunday, recording both of the team’s goals in a 2-1 win. The senior has compiled 77 starts in her four years at CSFU, including five game-winning goals, tied for the sixth most in Titans’ history.

In preparation of Fullerton’s high-powered offense, the Gauchos will depend on the forward duo of freshman Mallory Hromatko and sophomore Amanda Ball to lead their offensive attack. The two forwards were huge pieces in Santa Barbara’s match against Fullerton and CSUN. Hromatko assisted Ball on the game-winning goal against CSFU while Ball also scored the 3-3 equalizer to send UCSB into overtime against the Matadors.

The two underclassmen have made their mark this year, combining for a total of 13 goals, eight assists and 36 points. The two landed Big West honors this past Tuesday with Hromatko being named to the First Team All-Big West and Ball to the Second Team.

However, Hromatko and Ball have not been the only sources of production in the Gauchos’ success. Stumpf accredits his young group along with the leadership of upperclassmen’s supporting the team’s ability to compete at a high level.

“[This team] has surprised us in how savvy they are tactically,” Stumpf said. “We can make an adjustment at half and with no practice time they are able to implement them into the game … I guess I have a little more confidence in this young team because they have just found ways to win.”

The mixture of youth and experience has been a vital element in the Gauchos’ progression to the postseason. Along with Hromatko and Ball, six total players were selected to an All-Big West Team including freshman Jessica Parque, freshman Sydney Magnin, sophomore midfielder Chace Schornstein and junior defender Sydney Fuertes.

“We owe a lot of our success to the older players because if they weren’t so welcoming to us freshmen, I don’t think our chemistry would be the same as it is right now,” Hromatko said. “It’s a group effort every time we step out on the field and the individual stats are not even a factor.”

The keys to victory are simple for UCSB this Thursday: polish the team fundamentals they have been working on all season, and build from the positives of last week’s win against Fullerton.

“I don’t think we have to change [our] play at all against [Fullerton], we just have to continue what we have been doing,” Hromatko said. “We need to build off our play in the second half against them because we were able to connect more once we realized how their formations worked.”

UCSB will open up its first Big West Tournament match at Titan Stadium Thursday night. Kickoff against Fullerton will commence at 7:30 p.m. While this is yet another challenge for this young team, they understand the importance of embracing the moment and not letting it slip away from them.

“Our goal [this year] was to make it to the Big West Tournament,” Hromatko said. “So now it’s just about leaving everything you have out on the field because you never know when it could be our last game … we are going to come out strong Thursday and play for each other like we have been all season long.”

A version of this article appeared on page 10 of November 5, 2015’s print edition of the Daily Nexus.