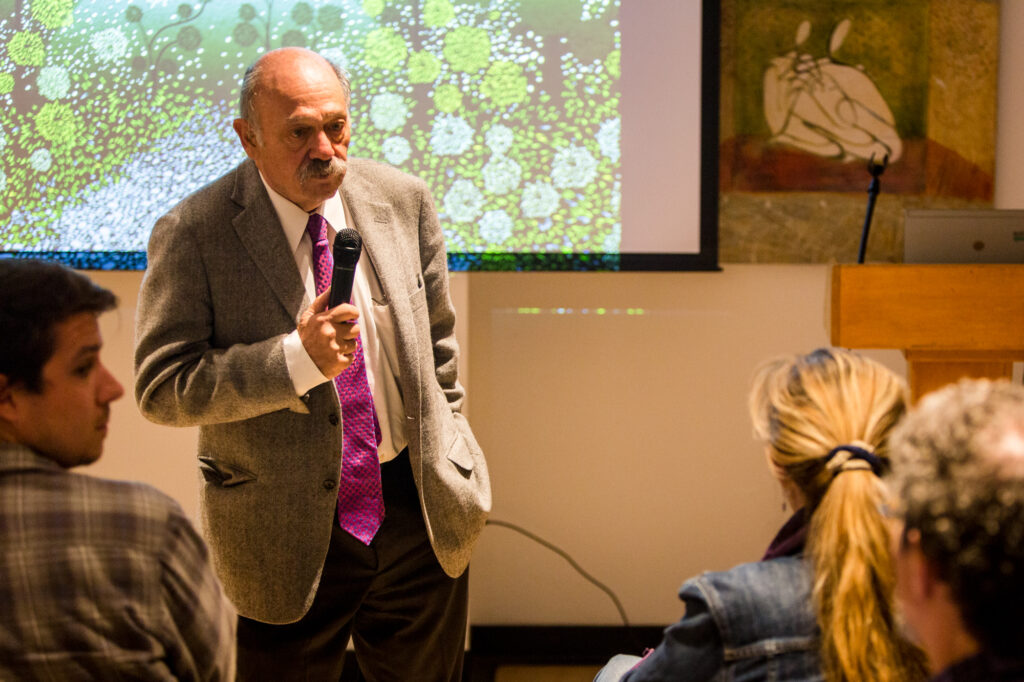 Dr. Bearman sought to inform his audience on the history of marijuana use, going as far back as discussing its medicinal uses in the 13th and 16th centuries. Riley Esguerra/Daily Nexus

Vice President of the Academy of Cannabinoid Medicine Dr. David Bearman lectured and held a book signing in an event titled “Why Medical Marijuana is Good For You & The Benefits of Changing Our Dysfunctional Drug Policy” Wednesday night at the MultiCultural Center.

Bearman focused on the history and politics of cannabis as well as contemporary medical studies of the drug. Bearman also held a Q&A session and signed copies of his most recent book, Drugs Are NOT the Devil’s Tools.  Bearman was a key founder of the Isla Vista Neighborhood Clinic in 1970 and Director of Medical Services for the Santa Barbara Regional Health Authority (SBRHA) for 17 years.

Bearman began with a 45-minute lecture on the history of  drug consumption,  beginning with Zoroastrian rituals and ending with GW Pharmaceuticals’ 2014 medical trials of Epidiolex, a liquid form of Cannabidiol used to treat epilepsy.

Bearman said the history of cannabis use can help people understand modern policy and culture surrounding the drug.

“The reason that history is important is it helps explain why we have this peculiar attitude towards this substance that has a tremendous amount of healing potential,” Bearman said.

According to Bearman, drug policy in the past has discriminated against African-American, Latino, Chinese, Native American and Irish minority groups, as well as many others.

Bearman said the word “witch-hunt” stems from Pope Innocent VIII’s Summis desiderantes affectibus in 1484. According to Bearman, the issuance sought to punish midwives (witches) for their use of cannabis to dull childbirth pains, since Church doctrine viewed this practice as heretical.

“One of the first groups that was discriminated against was where we get the word ‘witch-hunt’ from,” Bearman said. “Witches were midwives and used cannabis to ease the pain of childbirth.”

Bearman later said hemp was the “oil of the 16th century” due to its use in trans-Atlantic ships’ “sails and rigging,” including those used in the slave trade.
“Those boats were used for the triangular trade, both sugar, rum and slavery,” said Bearman.

Bearman said the Founding Fathers, including George Washington, were especially fond of hemp and grew the plant.

“Washington wrote in his diary that he so hoped he’d get home in time for the hemp harvest since he so particularly enjoyed being there for the burning of the slag,” Bearman said.

After providing a broad history of drug use, Bearman shifted his focus to the history of cannabis in Western medicine, crediting Dr. Brooke O’Shaughnessy with first reintroducing cannabis to the Western world.

Bearman said the wide use of cannabis as a legal medicine quickly changed due to policies enacted in 1930 by commissioner of the Federal Bureau of Narcotics Harry J. Anslinger, serving cotton and nylon corporations’ interests.

“He was the greatest bureaucrat of all time because he created a problem where it didn’t exist and thus increased his bureaucracy,” Bearman said. “The effort had really nothing to do with marginalizing marijuana — they were aimed at marginalizing hemp.”

Bearman ended by discussing contemporary medical studies on cannabis and the endocannabinoid system as well as discussing what he calls the “New Paradigm” — the viewpoint that substance abuse should be treated as a medical condition instead of through the criminal justice system.

“The first modern research on cannabis was having to do with seizures in 1949,” Bearman said. “Cannabis is immensely helpful for cancer patients and in fact it may kill cancer cells.”

Bearman answered a range of questions, including how cannabis affects driving, “big tobacco’s” possible future role in cannabis production and how a change in drug scheduling would affect cannabis research.

“What the Department of Transportation says is there’s no relationship between impairment and the level of THC,” Bearman said.

Bearman said the role of “big tobacco” in marijuana legalization would have a negative effect.

Santa Barbara resident Jarryd Wafer said he enjoyed the talk and was very interested in cannabis’s potential to treat his type I diabetes.

“I thought it was great learning about the histories associated, where we’re at today and where we’re going with cannabis,” Wafer said.

Third-year environmental studies major Tara Cseresynyac, who works as Dr. Bearman’s personal assistant, said she was happy about the turnout and is looking forward to future lectures.

In an interview following the lecture, Bearman said he would be open to giving another talk on campus and said he would like to see broader teaching of the endocannabinoid system at universities.

“I was very pleased with the turnout. I think people were interested — people stuck around, asked good questions and were interested in the information,” Bearman said. “I’d like to see UCSB have a course on the endocannabinoid system.”

A version of this story appeared on page 5 of the Thursday, November 5, 2015 print edition of the Daily Nexus.

According to the CDC, alcohol kills 80,000 Americans/year while marijuana kills none. So why are we not allowed to switch from the harmful, addictive substance to its far safer alternative? I don’t pay my taxes just to be told that I have to abide by laws that make me LESS safe!!