UCSB has a quiet Halloween this year, while UC Berkeley gets rowdy 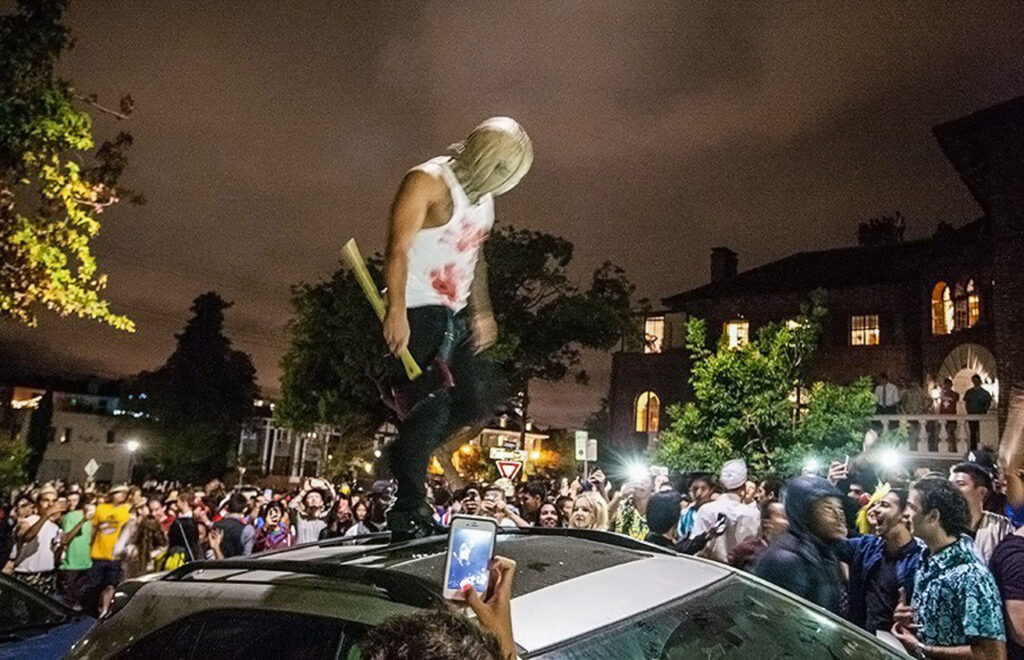 This past Halloween weekend, UC Berkeley attracted a crowd of over 5,000 party-goers, contrasting sharply to UCSB’s poor turnout in Isla Vista due to heavy law enforcement, parking restrictions and lack of out-of-towners. Timothy Dawson/Daily Cal

Upwards of 5,000 people packed the streets of Berkeley this Halloween — a stark contrast to the relatively quiet weekend in Isla Vista with significantly smaller crowds than in years past.

Students have compared Berkeley’s festivities to that of previous I.V. Halloweens, during which videos of rowdy street parties, car wrecks and police riots emerged on social media. UC Berkeley students and administrators attribute the rowdy crowds to both Halloween and the UC Berkeley vs. University of Southern California (USC) football game at Memorial Stadium on Saturday.

With the absence of signature Halloween festivities in I.V., which were replaced by university-sponsored concerts and events and the emergence of Berkeley as a new hotspot, students are questioning if UCSB lives up to its status as a Halloween destination and its Princeton Review ranking of sixth best party school in the nation.

Communications Manager for Student Affairs at UC Berkeley Adam Michael Ratliff said campus law enforcement is still investigating the cause of the parties and rioting.

“Student Affairs leaders are planning to gather the facts about this weekend’s incident to better understand what occurred, who was involved,” Ratliff said in an email. “They will continue to work with all of our various student organizations to promote safe events for the Berkeley community.”

UC Berkeley Police Department Lieutenant Marc DeCoulode said the presence of USC students at the football game and tailgating may have contributed to the rowdy crowds in Berkeley.

“I think what contributed to it was that Halloween fell on a Saturday, which doesn’t happen really often and the fact that we had the USC football game so there was some extra people along fraternity row,” DeCoulode said. “Both some of our people and USC people [were] outside, so it was a little more crowded than usual.”

“This year I think [police] were more lenient; this year it seems that the parties were shut down later than last year,” Nguyen said. “Last year, there were a lot of incidents of college student deaths in parties. The parties were dead silent at 10 p.m. to 11p.m., and all the parties were not big. It wasn’t like anything where everyone was allowed in and having fun.”

“I heard that there was an individual’s party so crazy they brought it out to the streets. Everyone was jumping on a car, and dancing on the car,” Nguyen said. “Apparently a guy dressed up as Jesus was also dancing on the car and everyone was yelling ‘Jesus! Jesus!’ But the windows cracked and everything. The police pretty much blockaded everyone inside on the street.”

Berkeley resident Nina Krishnan said the weekend was an outlier compared to what typically happens in Berkeley.

“The last Halloween at Cal was on a Friday, and it was quite disappointing. I can definitely say compared to last year, there were far more people on the streets at Berkeley — especially Frat Row,” Krishnan said “More people, bigger crowds — it was lit. It was definitely lit on Saturday.”

Krishnan said she witnessed a street party that escalated into car vandalism and then chaotic running from the center of the party. Krishnan said she did not witness any police or security at the scene and didn’t know what motivated people to run.

“It was more of a general party on the street at first. It wasn’t dangerous or violent — it wasn’t a riot — that’s not what I would call the first part. But then something snapped — in a flash, things got very messy as people started smashing cars and jumping on cars,” Krishnan said. “They definitely cracked the window and windshield and then in a few minutes, there was straight-out mayhem. People started running in all directions.”

The unprecedented Halloween party scene in Berkeley drew a sharp contrast to the quieter-than-ever weekend in I.V.

Santa Barbara Sheriff Department Public Information Officer Kelly Hoover said based on low turnout this Halloween, UCSB students are beginning to realize the danger of inviting out-of-towners and having open-door policies for parties.

“We’ve had huge crowds for Halloween especially, on a weekend. We were prepared for a large turnout; however, the last several years we’ve noticed a significant decrease every year in turnout for Halloween,” Hoover said. “The fact that there is heavy law enforcement, there was no music, parking was very strict and the students aren’t inviting out-of-towners — we are seeing it reflect in the number.”

“DP was filled with people. Everybody dressed up, some people getting a little too crazy. We’d walk a block, and in the next block, there are, like, cops having to get people on the sidewalk because they were too drunk,” Mares said. “It was intense because it was a playground for a lot of people to come.”

Mares said she enjoyed her Halloween weekend this year because of the safety and the lack of worry over out-of-towners.

“Halloween in I.V. was really exciting in the sense that we’re all dressed up, we all have fun and we don’t have to worry about school for a couple of days. Even if you’re not partying and you’re just walking down the streets in I.V., everybody’s just happy,” Mares said.

“The first year there was crazy amounts of people, and I think it is the last year before there was super enforcement of police,” Hashemian said. “[This year] there were more volunteers out there than actual people, which shows, like, how great of a job to keep this a local event.”

Fourth-year political science major Jorge Escobar said due to I.V.’s party reputation, many police and security resources are assigned to I.V. during Halloween and Deltopia.

“Every UC sends a certain amount of allocation of cops to Santa Barbara because they know a certain percentage of their school population will come to Santa Barbara,” Escobar said “That’s why you would see things like ‘UCLA Campus Police’ here in Isla Vista.”

Hashemian said she hopes I.V. can reduce police presence in the future if Halloween continues to be a local event.

“I loved what happened, and I guess it’s one year but if it happens in four or five years, then it becomes a trend,” Hashemian said. “Hopefully we can spend less money on cops coming here and also changing the culture, which is what we really need.”

“I was walking on Del Playa and I saw the police playing Frisbee with students; I saw students taking pictures with the police, chatting with the police,” Armistead said. “But you can tell they were from the area because they weren’t looking to trash the place, they were just looking to be with their community.”
According to Krishnan, this Halloween weekend doesn’t reflect the culture and reputation of UC Berkeley as a university and the community of Berkeley.

“I personally don’t think you would go to Berkeley for the parties,” Krishnan said. “There are other things that were far more memorable at Berkeley than the parties, such as the food, culture [and] people. That’s the vibe you get from the city.”

Nguyen said this weekend doesn’t change or increase Berkeley’s party reputation because they typically experience the same amount of parties as other colleges in the nation.

“I feel like we’re known to be work hard, play really hard. I think for [party] reputation, we don’t really have a matter of say in it,” Nguyen said. “I think for us we don’t care about the reputation — I have a feeling that it’s just Berkeley always has something going on every weekend where we really enjoy ourselves.”
Hashemian said she is glad UCSB is losing its party school reputation.

“It’s unfortunate that Berkeley had an insane [Halloween weekend], but insane as in having 3,000 people when, like, we have 16,000. I’m glad that we’re losing that reputation because it’s a reputation that doesn’t really represent us.”

“I think, ultimately, our reputation defines the quality of our degree,” Armistead said. “I think bringing Halloween down to a manageable fun time is the best thing for our community and education.”

Mares said UCSB’s party reputation will not change just because this year’s Halloween was safer and more local.

“I don’t think it has that big of an impact in our SB party scene or reputation because people still party. It’s just for that specific event nobody wants that to happen. Nobody wants riots or [to feel] unsafe,” Mares said. “I think it was a community agreement — ‘Okay, we’re a party school — we party all the time. But hey, this is our school. A lot of the locals want to feel safe. We still party but we’ll party in a different way.’”

Chancellor Yang said the university’s efforts to preserve I.V. have been effectual.

“As evidenced by the calm Halloween weekend, our combined efforts are making a cultural change in Isla Vista and helping to create a surrounding community that complements the preeminent academic stature of our university,” Yang said in an email.

A version of this story appeared on page 1 and 4 of the Thursday, November 5, 2015 print edition of the Daily Nexus.