The Daily Nexus
Swim and Dive
UCSB Splits Pair of Matches During Blue-Green Showdown
November 1, 2015 at 10:55 pm by Daniel Moebus-Bowles

This past Saturday, the UCSB men’s and women’s swim team competed together for the first time this season as both made the trip to Cal Poly. The Gauchos and Mustangs would split the Blue-Green rivalry matchups as the Santa Barbara women’s team took home a 143-137 victory and the men fell 154.5-107.5.

“Both teams started the meet a little flat footed,” Head Coach Gregg Wilson said. “The women’s team had such a phenomenal push in the second half of the meet that there was no way they would be denied. They have been very strong so far this season.”

With this loss, the men’s team falls to 0-2 on the season and the women improve to 2-1 overall.

The women started off the day on a strong note and set the tone for the rest of the meet. The team’s ‘A’ relay took home another victory in the 200-yard medley after defeating both Oregon State and UCLA in the same event last week. Led by senior Katie Records, the team came in at a time of 1:45.01, less than a second away from beating their best time of the season. They beat the next fastest Cal Poly team in the meet by half of a second. Santa Barbara’s ‘B’ team took third in the event at a time of 1:46.10 to round out the top three. 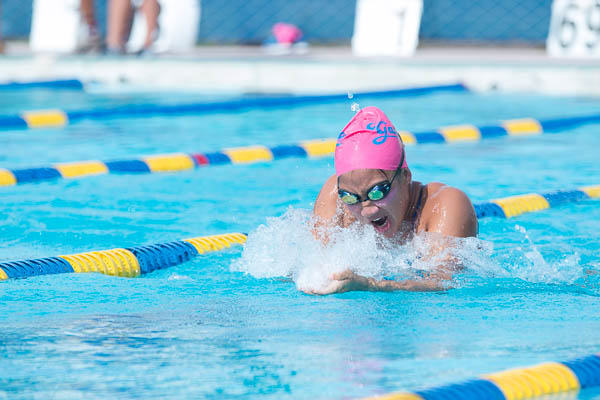 In the same event on the men’s side, the ‘A’ team for the Gauchos took home second in the race to add some points on the board early for Santa Barbara. With sophomore Billy Mullis heading the team, the Gauchos came in at a time of 1:33.05. Mullis led the entire event in the backstroke split. The Gauchos beat the next best team by nearly a second and a half.

Mullis was not done with his success on the day as the meet moved towards the individual events. He gathered his first win in the 100-yard backstroke event coming in at the speedy time of 50.24. The Gauchos rounded out the top two in that event with Gabe Bolender coming in second at a time of 51.65. Mullis would again come out on top in the 200-yard backstroke in a time of 1:50.51 to give three top-two finishes on the day.

On the women’s side, the Gauchos took home a total of seven first place victories. Three of those victories, including the first relay, belonged to one of Santa Barbara’s newest members. Junior transfer Cheyenne Low continued to show off her skills in just her second meet as a Gaucho.

Low took home her first individual event on the day in the 100-yard backstroke. She topped the event at a time of 55.97, and two Gauchos in junior Julia Mikota and sophomore Elizabeth Pulido rounded out the top three for Santa Barbara at 57.18 and 58.44, respectively. Low’s third win came in dominant fashion as she beat every opponent by at least two full seconds. She came in at a time of 2:03.33 and set her team up for their second victory of the season.

“I have had a great time getting to be a part of this team so far and my teammates have made the transition very easy for me,” Low said. “I think we have a lot of potential and we are very serious about improving throughout the season. This team loves to work hard and we can do some great things this year.

Santa Barbara’s next meet will be this Saturday, Nov. 7th versus UC San Diego. Be sure to catch the Gauchos at Campus Pool.