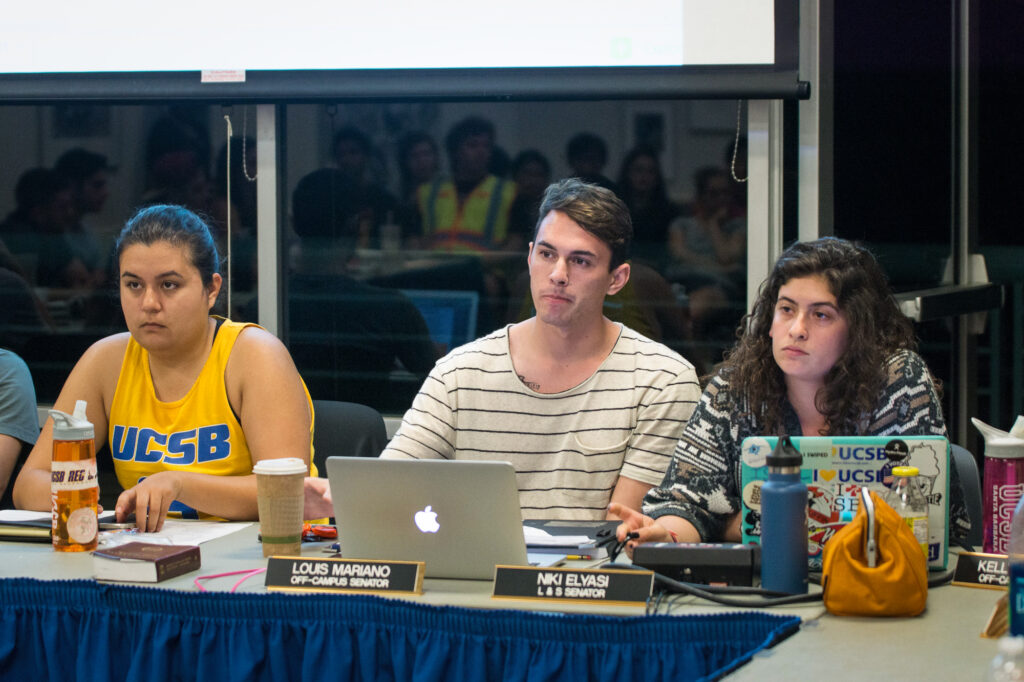 Associated Students (A.S.) Senate voted 13 to 8 on Wednesday to table a bill that would require student political parties to register as Office of Student Life (OSL) groups and abide by judicial procedures for claims of hazing or discrimination.

On-campus senator and second-year economics and political science double-major Nawar Nemeh presented the bill, titled, “A Bill to Update Article XVII Section 5, 7, & 8,” in response to alleged hazing of candidates within the Open People’s Party (OPP) and low student turnout for past elections. Under the bill, an OSL advisor would be assigned to each political party to monitor the group for any misconduct.

Off-Campus Senator and second-year Asian-American studies and political science double-major Akshaya Natarajan said she supports the bill because of her prior experience campaigning with OPP.

“As a senator that ran with OPP this past election cycle, I felt tokenized, and I felt whitewashed as a woman of color, flat out,” Natarajan said. “When I saw [my] picture, I literally laughed out loud. I was like what the fuck? I am three shades lighter than I actually am … and I was terrified.”

Off-Campus Senator and third-year history of public policy and political science double-major Jerel Constantino said that political parties can be monitored internally rather than through OSL.

“[A.S. staff members] are employed because they’re to not have conflicts of interest — it’s how they are employed,” Constantino said. “Their job is to be impartial and to work for the students. I have no concern of giving them authority.”

Off-Campus Senator and third-year political science major Stevan Abdalmalik said he supports the bill, recalling a time he felt pressured by members of his party.

“I had two papers due, I was on academic probation in my classes and I told one of the party leaders specifically … if I don’t finish these papers, I will be ineligible to run because I will get Fs in my classes,” Abdalmalik said. “Their response was, ‘you’re really letting everyone down; you have to fucking go or else.’”

Abdalmalik said requiring parties to register as OSL groups would not lead to OSL governing the A.S. program as a whole.

“Parties … are not A.S, it’s that simple,” Abdalmalik said. “A party is a political faction that runs in order to get a place in A.S. This bill would not be regulating A.S as an organization, it would be regulating an unregulated, unchecked power that has the potential — and has in the past — to harm students in it.”

Off-Campus Senator and third-year political science major Austin Hechler said an OSL advisor might be ineffective, suggesting that A.S. staff members regulate the parties because they are more familiar with the process and accessible to senators.

“The fact that having parties join as an OSL group will make hazing stop, that is completely false,” Hechler said. “I feel like someone who’s in A.S. that you see on a daily basis . . . [members] would be more comfortable to report hazing to them because they are an accessible advisor than someone who is in OSL that comes around once a year.”

“We’re being blind to the fact that O.P.P. runs year round. Let’s be honest; if you’re not in that little clique of OPP, if you’re not connected to A.S., you’re not going to know that you can run for an exec. position or senator because that option is not publicized everywhere,” Melgoza said.

“Honestly, I think it’s going to create more of a bubble than we already have,” Jordan said. “I think if we put a political party to our name year round, we get this tunnel vision of ‘oh I must align with my party’s ideals.’”

Nemeh said he proposed the bill to shed light on the culture of hazing within A.S., adding that members can treat each other in the “most toxic of ways” and very few victims feel comfortable coming forward.

“There were a lot of cases of students feeling victimized for their sexualities, feeling victimized about their work ethic, their relationships,” Nemeh said. “People don’t talk about how we treat each other and how we behave. I think it’s about damn time we do.”

Nemeh said even though A.S. voted to table the bill indefinitely, starting a conversation about hazing within A.S. is also important.

“My bill intended to bring that to the forefront, and in that sense, I do think it was successful regardless of the fact that it was tabled indefinitely,” Nemeh said. “It opened up a conversation about something that no one has talked about before, which is student conduct within the association.”